"A hidden key, a leap not taken, retrace your steps, escape your past, and the hidden key will be yours at last."

I don’t think it’s any secret that the central conceit of Ernest Cline’s ‘Ready Player One’ is pure wish fulfilment. Obviously that is not to say that a ready cannot derive more meaning from it, but I think it seems fairly obvious that Cline set out to incorporate the fantasies of his, and an entire generation, or pop culture fans into an easily accessible story. It’s that inherent aspect that could a movie adaptation intriguing or insufferable depending upon how it’s handled.

In the year 2045, Wade Watts (Tye Sheridan) is among the many who escape their harsh reality in the OASIS, an immersive virtual world where you can go anywhere, do anything, be anyone-the only limits are your own imagination. OASIS creator James Halliday (Mark Rylance) left his immense fortune and control of the Oasis to the winner of a contest designed to find a worthy heir. Soon Wade is hurled into a fantastical universe of discovery and danger to save the OASIS and their world.

I feel that if anyone can instil more meaning into a book that, if I’m being brutally honest, I found somewhat empty and indulgent, it’s Steven Spielberg. In some regards the seasoned director does wring a good deal more substance out of the source material but in others the film still falls short. Spielberg does a good job at stripping away many of the pop culture references in favour of zeroing in on the driving force of the narrative and characters. The result is an adaptation that actually builds upon the themes of its story. Though it still leaves something to be desired there’s no mistaking Spielberg’s particular craftsmanship in his handling of the story.

It’s also the most Spielbergian (that’s a word right?) movie the director has made since ‘Minority Report’. There’s a brilliant kinetic energy that permeates every action sequence to make them utterly electrifying. Spielberg also showcases once more that he has a better understanding of a scene’s geography and its importance more than almost anyone else. Every exciting set piece is concise and clear without losing any of its visceral thrill. His favouring of long, smooth takes over unnecessary fast edits gives makes the action flow seamlessly as well.

Another remarkable aspect is how the world of the OASIS is rendered. Though I wouldn’t call the special effects realistic necessarily, they do have a visual consistency that endows a certain believability to the world. The way in which the camera navigates the world never fails to evoke a sense of awe as it unfolds in front of the audience. It paints an astonishingly cinematic portrait that possesses a terrific depth of field thanks to the cinematography of Janusz Kaminski. The scope allows Spielberg to include many of the pop culture references in the background. But at the same time the frame rarely feels cluttered or overly dense. 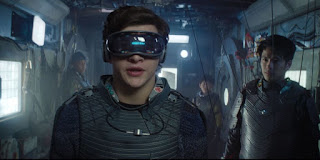 The characters that inhabit that world are all brought to life superbly by the talented cast. Ben Mendelson makes for a wonderfully maniacal villain while Mark Rylance serves as the Willy Wonka of the OASIS which he conveys with a sense of wonder and indelible charm. Tye Sheridan and Olivia Cooke make for compelling protagonists as well. Though if I may take this time to make a very minor nitpick (more with the industry as a whole than this movie), can movies stop trying to objectively attractive people out to be hideous? Olivia Cooke’s character has a barely noticeable birthmark on her face, which the film treats as if that makes her a freak of nature when by all intents and purposes she is still ridiculously beautiful. I’m just saying.

Another, significantly larger issue, comes from the development and depth that is bestowed to each of these characters. Though they are established well, ‘Ready Player One’ never really digs into its characters or what motivates them. Normally that might not be a significant issue but in a film that is literally constructed around the concept of people redefining their identities it surely wouldn’t hurt to uncover at least a bit about what exactly led those people to adopt their specific identities. Furthermore, the characters don’t develop as much as they do fill an obligation to the script. Though they undergo changes they seem to come about suddenly and when it’s convenient for the narrative rather than a more substantial way of conveying their progression.

I wouldn’t say the lack of depth is detrimental to ‘Ready Player One’ but it’s the reason it ultimately ends up being a middle tier Spielberg entry. There’s enough energy and pulpy joy to it, with the plot being fast paced and highly enjoyable. But it lacks that little extra something that would elevate it to stand alongside Spielberg’s stronger catalogue. That being said, middle tier Spielberg is still stronger than the work of most other filmmakers so you could do significantly worse when it comes to high concept blockbusters.

Highly entertaining and supremely energetic, ‘Ready Player One’ is a movie elevated by Spielberg’s deft touch, even if could stand to be elevated a little further.