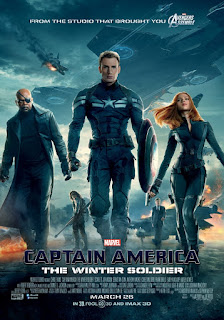 Once again I find myself being unable to be contrarian because the general consensus seems to indicate that many view ‘Captain America: The Winter Soldier’ as the best instalment of the MCU, a sentiment that I have to agree with. That being said I was curious to see how well it has aged within the context of the MCU since I last watched it as well as how it holds up as a singular entity, and both cases it proved to be just as phenomenal as I remembered.

Firstly, and perhaps most impressively, ‘The Winter Soldier’ is the only MCU movie to actually build upon and develop the themes it establishes in its opening act. Too many Marvel movies succeed at conveying an overreaching sense of development for their stories and characters but only really address their thematic conceits when it is convenient for the script. Themes of authority, trust, security, paranoia and history are all conveyed and developed in terms of how the characters navigate the story and interact with one another.

The way in which Joe and Anthony Russo re-contextualise these themes so that they fit within the comic book universe in which the film takes place whilst also being broad enough to relate to any audience member is a feat in of itself. Their direction grounds the film in a way that no other MCU entry has whilst still retaining those wonderfully energetic comic book sensibilities. They basically treat their subject as any other thriller might, even if this one just happens to involve a hypnotised robotic arm wielding assassin.

From the opening scene the Russos establish this narrative momentum that never lets up. There are quieter moments in which they allow the characters to establish themselves and sink into the environment of the movie, but overall the plot just rushes forward in a way that keeps the audience in a constant state of tension without ever leaving them behind. The thrilling set pieces are hung on a narrative that blends the twists and paranoia of the political thrillers that so clearly influenced the Russos, with the pulpy imagination of any classic comic book storyline.

The vehicle for this rollercoaster is Chris Evans’ endlessly endearing performance as Captain America, although in this movie it honestly feels more appropriate to call him Steve Rogers because despite his superhero physique he is as human as the protagonist of a classic thriller. Evans creates such an acute portrayal of a jaded soldier adjusting to a new world, but not in a way that feels overbearing or indulgent. Instead the writers allow Evans to subtly evoke empathy from his sudden displacement, whilst at the same time providing a firm motive for his ideologies. 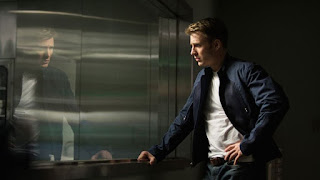 But ‘The Winter Soldier’ feels just as capable as an emsemble piece as it does a character study. I don’t think Scarlett Johansson’s Black Widow has ever been as interesting or complex as her portrayal and use within the story of this movie. Anthony Mackie does a tremendous job at grounding Sam Wilson with an empathetic characterisation before taking flight as Falcon. In complete contrast to his turn from ‘The First Avenger’ Sebastian Stan embodies a truly menacing and intimidating stance to make the Winter Soldier a formidable foe, whilst also retaining enough humanity so as to evoke sympathy. Samuel L Jackson is once again effortlessly brilliant as Nick Fury. The addition of Robert Redford is also an inspired touch, particularly because he’s playing the kind of governmental antagonist he himself would have been running from back in the 1970s.

The action of ‘The Winter Soldier’ really is something else to behold though. Despite borrowing from the Paul Greengrass school of editing a little too much for my liking that’s only personal preference though and I can’t deny that if the aim was to seek influence from Greengrass they did so in all the right ways. Rather than masking the artifice of their scenes through fast editing and camera movement, the Russos employ the technique to maintain a frenetic and chaotic atmosphere to their action. But by cutting at the pitch perfect moment and utilising some rapid visual storytelling with every shot, they sacrifice none of the clarity. With a greater emphasis on hand to hand combat as well there’s a real visceral impact to the way the punches, kicks and shield throws land in ‘The Winter Soldier’. They maintain a consistent camera height and continuous direction of movement for each edit which only adds greater immersion for the audience without losing that kinetic edge.

Then spread throughout all of this tight plotting, confident storytelling and breath taking action are the extra flourishes that truly mark ‘The Winter Soldier’ out as a classic of the superhero genre. The production design is superb on all fronts, transitioning from the high tech world of SHIELD to the more retro side of the story with relative ease. The sound design is impeccable, as is the methodical and rhythmic musical score by Henry Jackman. They even have a cameo for Danny Pudi, as if there wasn’t any other way to make me more enamoured with this movie.