You Were Never Really Here

As a fan of cinema I’m always conflicted over the idea of a filmmaker being as meticulous and as patient as the likes of Lynne Ramsay. On the one hand I obviously want her to work at a level that will allow her to achieve her full creative potential. But on the more selfish side of things, it’s really tough to wait that long for another amazing movie. Ramsey has distinguished herself as one of the most exciting directors of our age despite the fact that she has only directed four feature films in 19 years.

Joe (Joaquin Phoenix) is a combat veteran residing in New York. During the day he cares for his elderly mother and tries to keep a lid on his post-traumatic stress. At night he goes to work as a hired gun searchers for and rescues trafficked underage girls, whilst also bringing unspeakable violence to their abusers.

There are many elements of ‘You Were Never Really Here’ that feel somewhat familiar, evoking the likes of Martin Scorsese’s ‘Taxi Driver’ and Park Chan-wook’s ‘Oldboy’. But beneath those surface level similarities, Ramsay uses her directorial prowess to understand and convey the thematic core of the story, creating something utterly original in the process. It’s a breath taking character study that is just as striking for its brutal violence as its poetic beauty. It can be thematically elusive and overtly abstract at times, but the film never loses its focus on its protagonist whom it deconstructs and analyses with astonishing clarity.

Bringing that character to life is Joaquin Phoenix who delivers a phenomenal performance. Sometimes my mind can’t even comprehend that this is the same actor who portrayed the temperamental Freddie Quell, or the tender Theo Twombly because every performance is so radically different and fully realised. Phoenix’s entire physicality is built around conveying a specific mood and sense of character. From the first few seconds of him arriving on screen, it is clear that Joe is a man burdened by something. Most of this is communicated with hardly any dialogue from Phoenix as well. From the general way he moves to the smallest details, it all adds to create a rounded and intricate portrait.

It’s a performance that goes hand in hand with the filmmaker’s intent, because Ramsay is a director who has always held a fascination with details. ‘You Were Never Really Here’ follows that trait as its visual language continually places a focus on the minutia’s of then narrative. Ramsay finds ways to further her narrative purely through these details which never fails to add a level of innovation to her method of storytelling. They also serve to elevate what is a fairly sparse narrative. ‘You Were Never Really Here’ is somewhat predictable in a scripting level, but the choices Ramsay makes in how she executes that plot are what bestow the movie with substance.

Another way in which Ramsay’s direction and Phoenix’s performance work in perfect tandem is the ambiguity within them. They each take great care in limiting exactly what the audience can see within Joe. We know the broad characteristics of his character, and those are enough to inspire intrigue over what exactly is burdening him. This is an amazing achievement given how closely the film analyses him at other points. Occasionally the camera seems to take on an entirely subjective view of the world, as if we are seeing it from Joe’s point of view. Inhabiting his mind but never really understanding what lies within. 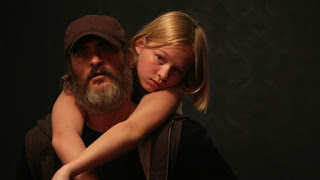 This elusive theme can be found within other technical aspects of the movie as well. Johnny Greenwood’s score is haunting in its pulsating rhythm, matching the ominous atmosphere of the movie’s visual language perfectly.  The sound design is also nerve wrenchingly intricate, drawing upon pain staking silences as well as sickeningly effective bursts of action. None of these aspects are designed to manipulate the viewer though. They don’t tell the audience to feel a certain way towards the protagonist. Instead we just sit and watch as this intricate portrait unfolds before our eyes.

There’s also a distinct level of restraint in terms of how Ramsay showcases the violence of her plot. We see violence at a distance, through a clinical lens that ultimately makes it seem even more frightening. The way the film normalises these brutal acts speak volumes as to how its protagonist sees the world around him. How he numbs himself to the pain of others whilst trying to serve some justification for the violence he enacts unto them. Whether it’s by way of guilt, desperation of a need for self-destruction, any sense of justice is merely a by-product of Joe’s actions rather than a motive.

But amid all of this crushing depression and biting tension, you will find a small glimmer of hope and beauty within Ramsay’s film. She seeks to present a broader view of the human experience in all of her films and ‘You Were Never Really Here’ is no different. There are moments of transcendent surrealism throughout the film that serve to make the overall journey through this damaged soul all the more affecting. Moments of innocence, redemption and hope are never lost to the film, even if they pass by its main character.

Nerve shredding tense and fascinatingly complex, ‘You Were Never Really Here’ is a phenomenal entry to Lynne Ramsay’s body of work.