"Your own life just slips away from you."

From a filmmaking perspective, it’s hard not to admire Steven Soderbergh. As well as being an icon of the 1990s American indie generation, he has continued to expand a challenge himself as his career has progressed. His versatility extends from making some of the most entertaining blockbusters ever like ‘Ocean’s 11’ to some of the most experimental films ever to herald from a director of his fame. So less than a year after his crowd pleasing return to the heist genre ‘Logan Lucky’, he now brings us the exact opposite in the form of ‘Unsane’.

Sawyer Valentini (Claire Foy) relocates from Boston to Pennsylvania to escape from the man who's been stalking her for the last two years. While consulting with a therapist, Valentini unwittingly signs in for a voluntary 24-hour commitment to the Highland Creek Behavioral Center. Her stay at the facility soon gets extended when doctors and nurses begin to question her sanity. Sawyer now believes that one of the staffers is her stalker and she'll do whatever it takes to stay alive and fight her way out.

So if you’ve heard anything about ‘Unsane’ that will likely be the fact that it was shot entirely on an iPhone 7 Plus. Soderbergh is not the first director to attempt this, with Sean Baker’s 2015 indie gem ‘Tangerine’ also utilising an iPhone for its shoot. The immediate question the viewer has to ask is why the director chose to film the movie in this way? What motivates this technique and how does it complement the story at hand? The same would go for any method of shooting but in one that so clearly breaks the mould as much as these aforementioned examples it draws extra attention and demands to be pondered over.

Whereas Sean Baker used the technique to create a sense of intimacy and roughness that matched the dynamic of his characters to the outside world, Soderbergh utilizes the uncertainty and limited perspective that such a shooting technique inflicts upon the story’s presentation. With such a harshness to the lighting and unevenness to the composition of each shot there’s an almost unnerving atmosphere created through the image alone. It’s an effective method of placing the viewer within the fractured mind-set of the film’s main character.

I would not go as far to say that the viewer will not notice that the film was shot on an iPhone, but a viewer who is in tune with what the movie is trying to convey should not question the decision. It feels perfectly in tune with the general mood Soderbergh wants to convey and rarely detracts from the movie on that level. The fact that a majority of the shots are clearly from a handheld camera help give the film a sense of kinetic energy that further builds upon the uncertainty and unease the narrative relies on. So much of the film is about questioning the protagonist’s mental state and subjective view that it allows for the camerawork to be as inherently subjective as possible. 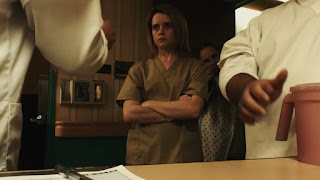 Portraying that kind of fractured mentality always presents a struggle for an actor. However Claire Foy manages to brilliantly portray a sense of duality that has the audience questioning her every move without rendering her character unreadable. We empathise with her uncertainty and her fear of it, but we are also fully aware of her potential unravelling. In fact it’s that clear conflict that drives a lot of the film. As a viewer you are caught between growing attached to Sawyer whilst being constantly aware that her own view of reality could be dramatically warped.

As promising as all of this sounds however, the aspects that make ‘Unsane’ riveting also serve to render it flawed. Though the method of shooting and central conflict within the film are riveting, Soderbergh doesn’t leave much room for them to be developed or thoroughly explored. It’s narrative sustains itself for the first act as the plot is unfolding and becomes intriguing towards the climax, but sags significantly in the middle as things seem to be halted for a while. I think it suggests that Soderbergh seems more interested in seeing the film as a construct rather than Telling a fully realised story.

To that end the pacing and structure of ‘Unsane’ suffer as well. The movie grows increasingly repetitive as the narrative progresses. To a certain degree this does complement the film as it signals Sawyer’s frustration with the establishment that repeatedly shuts her down. But once that message has been conveyed the movie just feels increasingly redundant with each subsequent scene that is then devoted to it. They also serve to make the central conflict slightly less ambiguous which in turn robs the third act of its intrigue. There’s still plenty to keep the viewer engaged but there’s definitely a cognitive dissonance in how the viewer should be absorbing each scene in the context of the overall narrative.

Not without its flaws but intriguing as a construct alone, ‘Unsane’ showcases Soderbergh’s more experimental side to fascinating results.