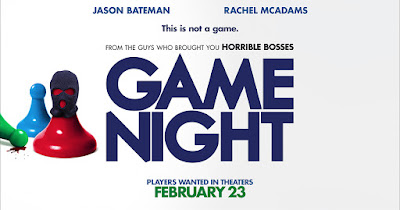 "I've always enjoyed the camaraderie of good friends competing in games of chance and skill."

I feel like this thought goes through my head with almost every mainstream comedy movie that comes out now, but there seems to be a distinct lack of actual filmmaking within many comedies today. There’s not so much an issue with the writing or acting, but in terms of directing I find that many movies in the genre just end up being lightly edited improvisation rather than a constructed movie. I should probably stop soon before I start reciting the Every Frame a Painting video on Efgar Wright.

Max (Jason Bateman) and Annie's (Rachel McAdams) weekly game night gets kicked up a notch when Max's brother Brooks (Kyle Chandler) arranges a murder mystery party complete with fake thugs and federal agents. So when Brooks gets kidnapped, it's all supposed to be part of the game. As the competitors set out to solve the case, they start to learn that neither the game nor Brooks are what they seem to be.

Another thing that mainstream comedies mostly avoid is a darker edge to their comedy. It seems that a lot of comedy writers haven’t heard of the philosophy that all comedy is based on tragedy. But therein lies another problem, because too many comedies confuse darkness for mean spiritedness. It’s a kind of comedy that is neither funny nor witty but certainly nasty and unpleasant to watch. Basically it’s a difficult balancing act, which is why it comes as a pleasant surprise that ‘Game Night’ not only finds that balance but also creates a thoroughly entertaining film out of it.

The entire premise justifies the darker moments of comedy but the film is also unafraid to lean into the absurdity of it as well. Better yet is that these conflicting tones rarely undercut one another. The stakes feel real enough to be invested in the plot and the comedy feels rich enough to a point where the film is enjoyable. There’s a good level of intelligence to the way the humour is assembled as well. In a few moments it actually reminded me a bit of ‘Arrested Development’ (and not just because Jason Bateman is in it). Though it never reaches those transcendent heights there’s a similar wit running through the movie.

I think what helps tie a lot of the film together are the characters. They are well defined from the outset and usually act in accordance with how they are characterised. There’s never a moment of someone doing something irrational simply because the writers needed to make a joke. Every action feels motivated and in line with what the character was established as. Despite being simplistic, the characters all have distinct personalities as well. They’re not categorised into groups or types to fill a function. They each feel like rounded people with their own identities. The result is that as the movie progresses and said characters start to develop it feels rewarding as well as hilarious.

‘Game Night’ is also really well paced, which for a lot of comedies isn’t even a recognizable term anymore. Each joke and scene feels played to its full potential rather than being stretched out to a point where it’s more painful than funny. I can’t begin to describe how refreshing it is to see a comedy movie with genuine structure to it. It’s not a collection of actors riffing that goes nowhere. There’s genuine development and progression as the film goes on. 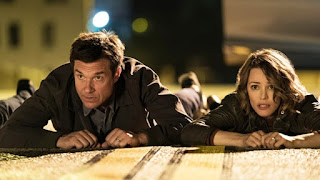 The cast are also terrific. Jason Bateman has been under utilised by Hollywood for far too long and it’s brilliant to see him using his comedic talent to the best of its abilities. His sardonic presence is on full display, but like the movie itself he’s allowed to drift into more absurd territory. Rachel McAdams fully commits to her role as well, conveying a great sense of humour through her performance. But I think the standout is Jesse Plemmons, whose role is less significant but highly memorable turn as a character who is so creepy that you’re almost caught in an awkward crossroads of whether to laugh or be unnerved, and it never fails to be brilliant.

There are a few issues with the film overall, but they are mostly in regards to its “objective” quality rather than any entertainment value. In all honesty I doubt anyone looking for a good time out of this movie will be too bothered by these faults. But for what it’s worth the direction feels a little lacking at times, struggling to convey moments of action. It also falters sometimes as it occasionally feels like it isn’t making the most of certain jokes. It’s difficult to describe but I just get the sense that a better sense of framing and composition could make some already funny jokes outright hilarious. There are also a few clunky lines if dialogue and scenes of exposition that feels out of tune. I get that those lines are necessary to move the plot forward but it comes across as a case of putting form over function as far as the movie itself goes.