The Strangers: Prey at Night 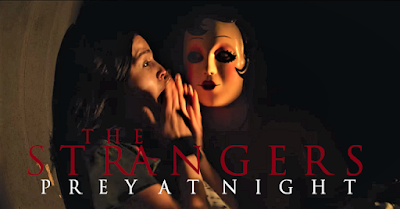 "I thought we were alone."

So, genuine question; does anyone actually remember ‘The Strangers’? I may not have personally liked the film due to its overreliance on horror tropes and lack of structure but if you enjoyed it on some level then that’s fine. But I highly doubt anyone held it in high regard, or at least not enough to demand a sequel a decade after its release. In fact I’m pretty sure the last time I heard anyone talking about ‘The Strangers’ was in 2008.

Mike and his wife Cindy take their son and daughter on a road trip that becomes their worst nightmare. The family members soon find themselves in a desperate fight for survival when they arrive at a secluded mobile home park that's mysteriously deserted, until three masked psychopaths show up to satisfy their thirst for blood.

One thing that I could not get over with ‘The Strangers’ was how irreverent the whole film seemed to be. Yes it was following the format of a traditional slasher, but the best slashers tend to underpin the killings with a message or some ironic twist of fate for the characters demise. They might poses a fatal flaw or the script might award them a cathartic moment. But in ‘The Strangers’ we just see a relatively well-off couple be tormented and murdered for 85 minutes. So I guess the movie’s horror thesis is that it doesn’t matter how middle class you are, three masked people are inevitably going to kill you in contrived ways regardless.

This all sounds like I’m droning on without actually addressing the movie, which is a correct assumption. At the end of the day I can’t think of all that much to say about this belated sequel. Much like the first movie there I couldn’t find any discernible theme or purpose to it. At most it seems to be an excuse to indulge in some horror clichés, but even then there isn’t any level of self-awareness or subversion that would make their use interesting. Save for a few small details the screenplay is also strikingly similar to the first in terms of its structure and pacing.

Overall these are just a few aspects of ‘The Strangers: Prey at Night’ that separate it from its predecessor. Whereas the first film had the benefit of featuring Liv Tyler and Scott Speedman who were at least competent in their given roles. The cast of this sequel don’t hold up as well, coming off as too detached from the moment or over reacting to a point where their characters become too inconsistent to hold weight. To give the cast credit the script is far from the strongest in terms of characterisation. Like a lot of horror sequels ‘Prey at Night’ seems far more interested in the murderers than their victims, which is saying a lot considering that ‘The Strangers’ barely seemed to care about the victims in the first place. 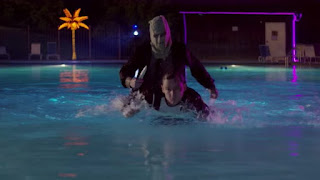 Though he had returned to pen the script of this sequel, Bryan Bertino is not the director behind ‘Prey at Night’. Instead that role is handed to Johannes Roberts and the film does take a drastic step down in quality as a result. While Bertino’s script for ‘The Strangers’ was peppered with contrivances and clichés, his direction at least endowed a sense of craftsmanship to them. The same cannot be said for Roberts handling of Bertino’s script for the sequel. Each set piece feels completely empty, lacking in detail and leaving a lot of awkward open space in the frame. There’s nothing evocative about the composition and no sense of tension in the way he stages each set piece.

I will say that as the movie progressed I started to notice a slight satirical edge that might have redeemed the film slightly if the makers leaned into it more. But either the film is at odds with itself or wants to have it both ways in terms of how it presents the tropes of its narrative. It’s perfectly fine to make a more playful horror film that indulges in the clichés of the genre. But too frequently ‘Prey at Night’ tries to turn around and demand the audience be invested in the dramatic stakes of the movie.

This is actually part of a deeper problem within the movie. The film never establishes a precedent for its tone. So as a result it alternates wildly in atmosphere and style. There are a few select moment of genuine tension within ‘Prey at Night’, just as there are a few moments of subversive intelligence. But to demand that the audience be just as accepting of both conflicting tones whilst never doing anything to accommodate both of them does nothing but create a dissonance between each act of the plot.

Lacking the craftsmanship of its predecessor, but retaining all of the clichés, ‘Prey at Night’ is an underwhelming sequel to an already underwhelming horror movie.