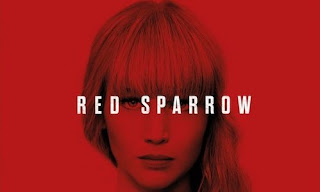 "They gave me a choice, die or become a sparrow."

It’s always intriguing to see a movie being sold as a mainstream genre entry only to actually be a twisted subversion of said genre that will likely leave most audiences highly uncomfortable. Basically anyone who went to see this movie hoping to get a cheap eyeful of Jenifer Lawrence is going to have sit go through some very heavy themes and uncomfortable levels of violence and they’ll also be made to feel a little guilty given what the film is actually about. Put it this way, I feel sorry for the couples who saw this movie hoping for a good time.

When Russian ballerina Dominika Egorova (Jenifer Lawrence) sustains a career ending injury, she finds herself in need of a job. Through familial connections she accepts a government job that requires her to put aside her humanity and use her sexuality as a means to seduce and extort information from powerful targets. This throws her into a dark and twisted labyrinth of mystery that soon becomes a deadly and destructive game.

We’ve all seen a spy movie in which a sexy seductress tries to foil our daring protagonist. But luckily our protagonist is always made of stronger stuff and has the courage to stick his dick elsewhere. So there is definitely something interesting in the concept of trying to deconstruct that archetype, especially in today’s climate. The problem with ‘Red Sparrow’ though is that there’s this dissonance between the themes of the movie and its central narrative. Some of the more provocative elements of the story are compelling, but they are not connected or explored to an extent that makes them feel functional.

This isn’t so much of a problem during the first half of the film in which we see the gruelling training of the protagonist. At least there the theme of the film relating to sexuality is acting as the driving force of the plot as well. We actually get to see the brutality and emotional consequences of this method of spying and it makes for an involving watch. However as the movie continues to unfold it loses a lot of those distinctive elements and gradually morphs into a fairly generic spy thriller. Not only does this create a sense of tonal dissonance between the first and second half of the film, but you also lose a lot of that intrigue that made the first half feel compelling. 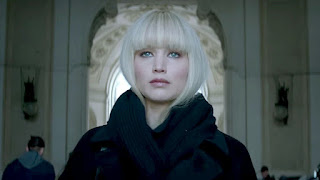 What makes matters worse is that the second half is predictable in how it unfolds which undercuts any sense of mystery the film was trying to build up. There’s a sense that ‘Red Sparrow’ wants to have it both ways in how it treats its narrative and protagonist. On the one hand it wants to keep the viewer in the dark regarding what the main characters state of mind and evoke a sense of political intrigue, but at the same time it’s also predictable to a point where a lot of that mystery simply doesn’t exist. The it also wants to create emotional beats within the story that don’t feel earned because the film never established where the characters were at in regards to how they relate to one another.

Though the protagonist is somewhat mishandled in how she stands within the plot, I can at least praise Lawrence’s performance. She gives such an unflinching view of her subject that feels courageous and unyielding. Her accent is a little inconsistent through the movie but she compensates by bringing a great physicality to the role. Quite often she’s able to convey a sense of identity through her character’s movement rather than her dialogue. In fact considering the character’s background as a dancer that’s actually quite a brilliant way of embodying her back story as a means of complimenting her current actions.

I just wish the movie itself used a similar method of variation when it comes to exposition. Too often the expositional scenes of ‘Red Sparrow’ boil down to a series of conversations that are repetitive in tone and visual language. The pacing also suffers a lot as a result. At 2 hours and 20 minutes the move is a slog to get through, with each passing minute only feeling even longer as the plot drags on. Most of the interest I had in the first act dissipated a long time ago and I found myself waiting for everything to wrap up as quickly as possible. Francis Lawrence definitely has a measured approach to raising tension and this does work well when the plot has enough substance to make the narrative feel involving. It also has the added benefit of making the moments of violence feel even more impactful due to the way they contrast with tranquil scenes. However once the plot loses steam everything else is dragged down with it.

‘Red Sparrow’ is an intriguing concept that feels involving for the first act, but slowly weakens in interest the longer the movie goes on.