Films like Alex Garland’s ‘Ex Machina’ represent science fiction is at its most affecting. It takes high ideas and futuristic concepts but uses them to explore basic human emotions that are applicable to us all. It explores the way advancing technology can fundamentally change human nature not just on a physical level, but also on a moral one. It was an incredibly impressive directorial debut. Though it may be hard to believe, his second feature is even more ambitious and perhaps even more stunningly rendered.

When her husband (Oscar Isaac) becomes critically ill following his latest mission, a biologist (Natalie Portman) is recruited to the organisation that assigned him that mission. She and a team of scientists undertake and expedition into a mysterious zone called the Shimmer to try and identity its source. All but one of the previous explorers have been killed, and the mysteries that lie within prove to be beyond what any of them could have comprehended.

Unlike most science fiction films of recent memory, Garland’s ‘Annihilation’ doesn’t seem to fit into any singular category. The only way I can describe the film’s progression without spoiling it is to say it begins in the realm of Cronenberg or Carpenter and steadily builds its way to the likes of Kubrick or Tarkovsky. It begins as an unnerving journey into the unknown and climaxes with one of the most transcendent pieces of filmmaking I’ve seen from any film in recent years. It seems to carry the influences of all the filmmakers I listed earlier, but is also so distinctly unique and visionary that it demands to be pondered and obsessed over.

But ideas are nothing if they are empty, and ‘Annihilation’ immediately involves the audience by underpinning the outlandish premise with grounded human emotions. It uses these emotions as a through line to give the whole movie a connective tissue. There are emotional hooks that drive the characters and lure the audience into their plight. Though some are definitely explored more than others, the level of strong characterisation and subtle empathetic links does wonders for the film’s evolving narrative.

Much like the characters, as a viewer you’re both curious towards and dreading what will be found at the centre of the Shimmer. Garland displays such a mastery of atmospheric filmmaking here that you barely even notice the environment as being distinctly alien. It’s familiar but also eschewed and as the tension of the situation mounts it strays further into the realm of the unknown. Whereas any other movie with a finale like that of ‘Annihilation’ might feel like too strong of a turn, Garland crafts such an immersive world that it feels like the only natural progression for the story. 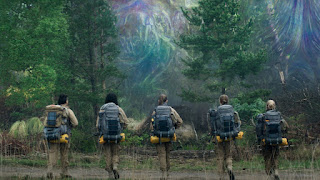 This owes a lot to the film’s highly distinctive soundtrack and visuals. Much like every other element of the film they evolve to suit the rapidly changing climate. The score begins as a homely, comforting element but slowly morphs into an electric driven nightmare. The cinematography uses a soft focus for the films first act but once the team descends past the Shimmer we get to witness a high contrast hell scape that as visually stimulating as it is unnerving. Even in some of the more horrific moments I found myself unable to look away for a second.

Make no mistake, ‘Annihilation’ is a deeply unsettling film. I think part of what makes it so affecting in that region is the way it varies the kind of horror in which it deals. There are shocking moments of visceral dread, which stomach churning body horror. Then there’s the emotional level of seeing characters you empathise with being put through this kind of trauma. But finally at the end comes the existential dread that feels ambitious, profound and so thoroughly earned. The movie is patient and elusive enough so that the finale which raises more questions than it answers still feels completely fulfilling. It invites you to dissect it as much as it is content with just allowing the viewer to back in its atmosphere and emotional weight.

In a film that contains long stretches of no dialogue the cast do an excellent job of conveying a great deal through their physicality alone. They all make for engaging screen presences and have a good dynamic as a group, with the script giving them plenty to work with in terms of crafting unique reactions to the events around them. Portman in particular gives such a performance that is brilliant in how measured it is. She feels as if she is using every second of screen time to create an impression. The cast are so good that it makes my only minor issue with the film more prevalent. The dialogue can’t help but feel too overt at times, spelling out exactly what the characters are thinking rather than alluding to it.

For most other movies those stray lines of dialogue wouldn’t be an issue, but in ‘Annihilation’ where everything is so beautifully ambiguous they stuck out a little. But it’s that ambiguity and sense of intrigue that drives the film and demands that it be revisited and interpreted. Films that are as bold and brilliant as ‘Annihilation’ will always be important because they are visionary in a way that few films dare to be.

Bold, beautiful and breath-taking. ‘Annihilation’ is an ambitious and highly profound piece of science fiction cinema.