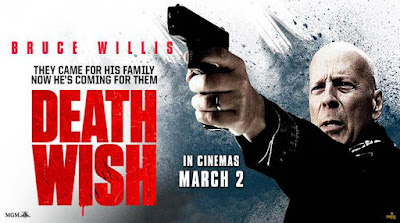 "If a man really wants to protect what's his, he has to do it for himself."

Of all the things that we need right now in today’s political climate, an unironic remake of ‘Death Wish’ by Eli Roth is so far down the list of priorities that I can’t even think of an appropriate metaphor to compare it to. Roth is not the only director who has sought influence from the video-nasties, but he does seem to be the only filmmaker who looks at it and exclusively saw the grit and violence without absorbing any semblance of the artistry or subversives that underpinned them (which wasn’t a whole lot to begin with). Settle in because I’ve got a lot to say about this thing.


Forget the plot, no one cares.


Much like the original adaptation of Brian Garfield’s novel, ‘Death Wish’ went through a number of iterations before arriving at the current destination. Whereas the original was once eyed by Sidney Lumet, this updated version began life as a script penned by Joe Carnahan who was also set to direct before being booted by the studio and eventually landing at the feet of Eli Roth. So it’s not the first time we have lost out on a potentially great adaptation of a novel that (though you would never know it from the movies) is a complex condemnation of vigilantism.


I honestly don’t even know where to begin. Do I analyse ‘Death Wish’ with consideration for its implied intent and message, what it has to say about modern society and how it conveys its central themes? Or do I actually judge it based on the merits of the craftsmanship behind the camera? To say the film is tone deaf regarding the climate to which it has been released is an understatement. Rather than bring up any complex ideas or any moral interrogation regarding its hero, the movie places him firmly on the high ground. The posters even describe him as a “patriot”.


However, that being said I think claiming that ‘Death Wish’ has any kind of message is giving it too much credit. Roth wants to make an exploitative vigilante thriller and I don’t think he cares or even realises the political implications of what he is churning out. There’s no political agenda, or at least not a deliberate one, within the movie because that would suggest Roth is aspiring to create anything other than a juvenile recreation of his own twisted cinematic fantasies.


Far be it from me to tell Roth what he can and can’t have fun with. But if you’re going to commit to either a tongue in cheek homage to vigilante B-pictures or try your hand at a genuinely serious thriller then pick one. Roth’s film aims for both (I think, it’s honestly hard to tell) and misses spectacularly, finding itself in the murky territory of a bland and cheap shell of nothingness. It is nigh on impossible to actually be invested in the stakes of the movie when there is not a single logical or consistent narrative point throughout the whole movie. Within the supposed gritty story lies a bottomless pit of narrative contrivances and plot holes that instantly dissipate any semblance of intrigue or tension. 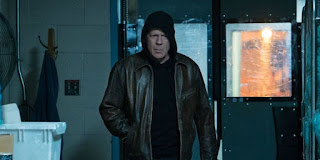 At the same time the film simply isn’t that entertaining, or even at all. It’s flat and stale colour palette make for a dingy environment and Roth’s equally vapid direction gives the action scenes even less weight. The violence never feels impactful, the emotions never feel genuine and neither the themes nor the characters have any hint of believable development. As usual with Roth there is no sense of cohesion from scene to scene which leads me to believe that if he was trying to say anything with the movie I certainly couldn’t pick up on it. But something tells me that even if there was a way to interpret this unengaging slog I wouldn’t want to take that opportunity.


Bruce Willis is such a predictable and tired casting choice that it almost comes full circle and starts to feel miscast in its own right. He brings his usual unvested attitude to proceedings and therefore makes the protagonists descent into vigilantism completely ineffective. Furthermore when Willis is paired up in certain scenes with Vincent D’Onofrio which only highlights his inability to keep audiences engaged even more. At least D’Onofrio seems to be giving some amount of effort that at least establishes a consistent set of character traits, which makes Willis’ grumbling antic even more painful to sit through.


At the end of the day ‘Death Wish’ is a movie that does so much whilst achieving so little simultaneously. If you read into the implications of its moral code then it is flat out horrifying that anyone would think this is worthy of being released. But at the same time to assume the film has any central theme is assuming too much. Roth’s movie is ugly and hollow. It has nothing to say and commits to no single idea beyond paying homage to the most surface level attributes borrowed from the most loathsome sources. I could give more time in reciting why I hated the movie, but it seems like a waste of time given that Roth and Willis hardly seem to care either.


‘Death Wish’ isn’t worth the effort to hate or dissect.