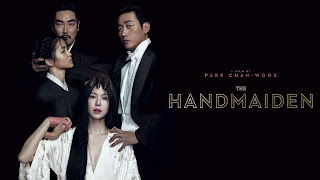 It says a lot about a director with the skill of Park Chan-wook when you acknowledge how he can take a story about imprisonment, disembowelling people with hammers and accidental incest, then take a story about high class society, love triangles and financial plots only to achieve the same viscerally thrilling and haunting results with both of them.


In a Japanese occupied Korea, 1930s, con man Count Fujiwara (Ha Jung-woo) hires a pickpocket named Sook-hee (Kim Tae-ri) to become the maid of the mysterious and fragile heiress Lady Hideko (Kim Min-hee), in an attempt to seize her wealth. But the story takes a tawist when the lady falls in love with her maid.


What struck me most about Park Chan-wook’s ‘The Handmaiden’, rather surprisingly, is just what a clash of cultures it represents. While taking a Victorian crime novel, Fingersmith by Sarah Waters, and resetting it within a Japanese occupied Korea (a location that will undoubtedly hold deeper relevance for its native country though one can take a surface glance and deduce that the subject of oppression and subjugation probably plays a part) would undoubtedly result in various sensibilities in how the story itself unfolds, the way in which Chan-wook chooses to structure and frame his story feels reminiscent of many famous directors from Kubrick to Kurosawa, all wrapped up in his usual psychologically twisted nature.


Being told in three parts with a clear structure that establishes, subverts and often outright destroys any expectations you may have built up over the course of the film, ‘The Handmaiden’ speaks volumes about characters who want to escape the lives they are born into. Each new perspective of the story underlines a hidden motive or a new characteristic that can shed light on their innermost desires, be it freedom, acceptance or luxury. The result is that by the end of the film not only do we have a complete understanding of the meaning behind every characters actions (that are sometimes revealed in a non-linear fashion) but we feel a genuine sense of gratitude for the complex portrait that has slowly been crafted over the course of the movie.

Despite being set in the 1930s Chan-wook’s direction has an almost timeless sense to it. His impeccable compositions and synchronistic framing gives the isolated environments a sense of entrapment that can reflect his characters own personal issues. The design is so impeccable that it only highlights the amount of detail and patience taken in capturing them, it is not a thriller that feels concerned primarily with rushing through each plot point as it is one that allows you to soak in the environment and characters in order to understand why the eventual twists and turns in the plot are as significant as they are made to appear.


The characters in question find themselves at the centre of a narrative that is most definitely about power, perversion and sex. While I won’t delve into spoilers I can say that the film is both visually and thematically steeped in sexuality. I’m somewhat divided over whether or not it can be labelled as gratuitous to a certain extent. While at times it is made to feel exploitative in order to reflect the mood of the film itself when Chan-wook wants the love scenes to have more dramatic heft to them it still has an uneasy sense of longevity that risks coming across as unnecessary, especially one in the final few minutes of the film. That being said the way its presented ties in suitably with the thematic meaning behind the scene, as in a film where sex is so often used by characters a means to an end in order to gain power or money of some kind, it’s almost gratifying when the act is committed between two people who are genuinely emotionally connected to one another.


Clocking in at 145 minutes the film suffers slightly in its pacing, where not every section is quite as riveting as another and having established so many interconnected storylines the process of concluding them all at the end is a lengthy one as well. Just when you think the main story is over the minor details still have to be swept up. But by employing this hyper sense of reality Chan-woo brings forward a greater sense of tension and an almost operatic feel to the film as the varying events play out. It also helps that the performances are fantastic across the board with each unique perspective feeling fully realised due to the conviction with which each actor plays their role.


Exquisitely detailed and emotionally involving as well as viscerally disturbing on some levels, ‘The Handmaiden’ stands as one of Park Chan-wook’s most elegantly crafted films yet.