Talkin' Scorsese: The Age of Innocence 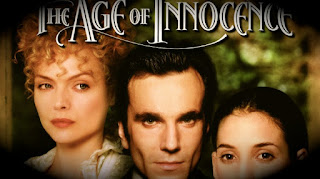 "You gave me my first glimpse of a real life and then ask me to carry on a false one. No one can endure that."

Though an 18th century period piece would initially appear to be a deviation from Scorsese’s usual calibre of filmmaking. However as he has proven time and time again, he is a director that applies his own themes and sensibilities to the subject matter at hand. His crime movies are about codes, ways of life and honoured agreements that entrap and imprison those who occupy them, his film about high society follows a similar pattern.


Newland Archer (Daniel Day Lewis) is planning to marry the respectable May Welland (Winona Ryder). May's cousin, the Countess Ellen Olenska (Michelle Pfeiffer), has returned to New York, which causes a shock in society circles due to her unconventional views. As a result Newland becomes increasingly disillusioned with his new fiancée May and her innocence, lack of personal opinion, and sense of self.


So while on the surface this sounds like a standard love triangle that any filmmaker could knock out in their sleep, Martin Scorsese once again managed to look deeper into the themes and resonance of the script and bring forward his own central conceits and ideologies that would evoke more thought provoking ideas and messages from the film. Based off of the book of the same name by Edith Wharton the film is not about reliving the trivial dramas of socialites, it is about examining the way the characters’ lives are dictated by the society they inhabit. How social conventions result in each one of them having to uphold certain expectations and how that can conflict with their own personal desires.


Just because the film lacks gunfire and gangland violence does not make it any less brutal than Scorsese’s previous efforts. The emotional powerhouse on display from a man’s [passion being slowly crushed to the suppressive nature of the society he occupies. It is frequently tragic and poignant to an almost painful extent, not only because the script is able to craft such empathetic characters but it so fully fleshes out the world they inhabit that their inevitable heartbreak seems to crushingly unavoidable that we are almost disheartened that we even dared to hope that the outcome could be anything else.

But one of the elements that makes this environment feel so fleshed out is, as always, Scorsese’s direction. In the past he has employed his flashier and more flamboyant techniques to reflect a characters state of mind but here Scorsese’s camera simply observes. He takes note of the smallest and subtlest of moments and it is through these actions and observations that we not only perfectly understand each characters motivations without it ever being truly explained, but also the way society around them restricts their every inflection and gesture. Not only does that atmosphere create an impression that hangs over the rest of the movie and establishes a clear motivation for every decision on display, but when some passionate moments do seep through they seem all the more daring for it.


This technique requires immense patience and one would think that may be difficult for a director known for crafting films of such high energy like Scorsese. But once again he is able to defy convention and move his camera slowly through the high society. Normally he never relies on static shots and though the camera is never still within ‘The Age of Innocence’ it moves at such a slow pace that it gives the viewer time to soak in the rich details of the surroundings and when he wants it to the director can plant his camera directly into a conversation. It does not seek to alienate or separate the viewer from the characters, instead it serves to implant it directly within their establishment.


The performances in question are superb, as one would of course expect from the likes of Daniel Day Lewis and Michelle Pfeiffer. Though it’s not as explosive as the roles that would earn him a place among legends, Day Lewis’ performance here is a restrained but effective one. He is extremely confident as the more conflicted figure, caught between his devotion to upholding society’s expectations and fulfilling his own desires. Pfeiffer’s performance is one that leaves much up to interpretation, the way she cuts through conventions and seems to take delight in seducing Newland with the power of her opinions. The biggest surprise though could be Winona Ryder, as the way her character’s arc is written and structured allows her to reveal hidden depth and complexity within her performance, but she is able to convey all of this with great conviction and is ultimately integral to the final emotional punch that underpins the movie.


Stunningly directed and beautifully constructed as well as emotionally riveting, ‘The Age of Innocence’ is an off kilter genre for Scorsese but one that he can pull off with equal brilliance.