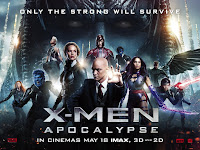 "Everything they built will fall and from the ashes of their world we'll build a better one."

2016 is getting a lot of comic book movies, so far this year we have seen the mega-budget versus movies and how to do them perfectly (‘Captain America: Civil War’) and how to do them horribly (Batman v Superman’). We’ve also had stuff that goes completely beyond the spectrum of what we thought constituted the genre (‘Deadpool’). AS well as that of course we still have ‘Doctor Strange’, ‘TMNT 2’ and ‘Suicide Squad’ to come. But right in the middle of all of them lies ‘X-Men: Apocalypse’, so the big question is, can it possibly stand out?


An ancient mutant (Oscar Isaac) awakens from a two thousand year slumber to annihilate humanity in order to form his new world order. He gathers four horseman to aide him on his quest including the immensely powerful Magneto (Michael Fassbender). With nothing else to defend earth it lies with Professor Xavier (James McAvoy) and his X-Men to stop the Apocalypse.


There are a number of specific things that I admire very much about the X-Men films, the first being their exploration of themes such as prejudice and segregation as well as their heavy ensemble nature and how they rarely resort to a simple ‘us vs them’ attitude. As well as this I’ve enjoyed the way that, unlike many other superhero films, their third act finale often centres on an emotional payoff rather than a simple, weightless fight sequence. I often find that the lesser entries in the franchise are ones that disregard these aspects, and ‘X-Men: Apocalypse’ disregards those aspects.


It is disappointing to say the least, and while ‘Apocalypse’ is certainly not the worst X-Men film (by a long way in fact) it’s far from one of the best (possibly by a wider margin). For starters it never really addresses any of the aspects that once made this franchise unique. The first hour is devoted specifically to setting up each new character and finding out where the returning characters are. It darts from one to the next at a terrific pace and inevitably not everyone gets their chance to shine. Which is frustrating as some of the characterisations of the beloved characters are at their best, Nightcrawler, Cyclops, Storm and Angel all look as if they are lifted straight from a comic book, but like the drawings of a comic book they ultimately end up being flat and one dimensional.

But it turns out that being one dimensional is the least of a character’s worries as many other fall victim of tragic inconsistencies. As Jean Grey, Sophie Turner comes across as mind numbingly uninteresting, Jennifer Lawrence’s mystique lacks charisma of any kind and is horrifically sombre. Worst of all though is the titular Apocalypse who not only has a design that I can only describe as a baffling oddity, but his plan is so one note and his motivation is so unclear (he essentially hates humanity because he’s the bad guy). So not only does this create your basic egomaniac villain but also brings us right into the ‘us vs them’ scenario that I mentioned before. Bad guy wants to end humanity, good guys have to stop him, the end. The disadvantage of such a basic moral compass is that any sub-plots or character development is crushed by the massive ensemble on top of it. It sacrifices evolution and emotion for exposition.


But despite this each actor is competent in their role, if anything it only makes it more frustrating that they have so little to do. On top of that ‘Apocalypse’ fails to really advance any aspects of this universe that hasn’t been explored before. Surely there’s only so many times someone can say “You’re not students now, you’re X-Men”, for Xavier to defend Magneto only to fall out with him and part their separate ways before concluding with someone resolving to form the titular team of mutants.


But going back to those factors I was talking about earlier, can we at least expect a unique finale that relies on emotion over meaningless destruction? Not really. In fact the collateral damage in this film is beyond anything we’ve seen from the DCEU and somehow seems to carries even less weight. We don’t just see a single fictional city levelled we witness the likes of Sydney, New York and Cairo literally wiped off the face of the earth, and none of it really has an impact.


There are a number of deeply impressive scenes such as the return of Quicksilver and another involving Magneto in a forest but for the most part the action sequences themselves are drowned within CGI. Though that’s not necessarily a bad thing (almost every blockbuster is now) the effects have so little weight to them and are so abundantly in your face that at no point was there a scene that I genuinely believed was real, it always felt like what it was, an effect.


A mixed bag for a mixed franchise.