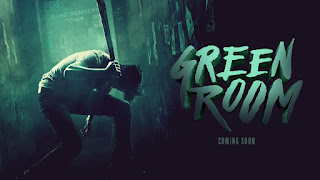 Sometimes you see a film that really gives you joy in how good it is, how excellently constructed it is, how well it accomplishes its goals and how well it revitalises a genre that one feared was a forgotten art form. ‘Green Room’ is not one of those films, don’t get me wrong, it is excellently constructed, accomplishes its goals and revitalises a genre that I feared was a lot art form. But joy is not exactly the word I would use to describe this film, or any word relating to it really.


A Punk Rock band This Ain’t Right has fallen on hard times and to make ends meet they agree to take a last minute gig in a secluded bar in the Pacific Northwest, only to find it run and populated by neo-Nazi skinheads. When they stumble upon a crime scene backstage, the night quickly descends into violence.


Now you can say all you want but I think this film is really missing something with its title as nothing would draw me to a cinema faster than the film ‘Punk Rock vs Nazis and Patrick Stewart’. But then again that might not be the most marketable of titles (it’s kind of hard to fit it on a poster) and we already have enough ‘vs’ movies this year, although this one would be at the top of my list for sure. Especially with the knowledge that it’s being directed by Jeremy Saulnier as he is one of the most inventive and interesting people working within the indie scene today. His previous film, ‘Blue Ruin’, was a beautiful film full of massive and sweeping set pieces that used its expansion to create a sense of isolation. With ‘Green Room’ he confines the space and maintains that sense of isolation and the effect is even better, with a claustrophobic and creeping atmosphere to play into the strengths of a tight and confined story.

The confines of the plot allow the events of ‘Green Room’ to play out in a fast and brutal fashion. It alternates between tight and edgy conversations and astonishing bursts of violence that really are brutal in a fashion that I haven’t witnessed in a while. It’s partially due to the gory nature of them as ‘Green Room’ does not shy away from its violence at all, it’s graphic and in your face. But it’s also the result of some great tension building and (something that a lot of modern storytellers seem to forget) the art of the surprise.


When I say surprise I don’t mean in the style of a jump-scare, a brief and ultimately meaningless burst of suspense, no. Here I mean plot twists, character deaths, circumstantial revelations that either transpire through the action or the conversation and are so shocking and difficult to guess in the build up to the events that when anything does actually transpire, you end up catching your heart in your mouth, and all the while Saulnier is still raising that tension and maintaining that break neck pace, this is a rush that doesn’t stop until the film ends.


There is even a certain amount of surprise in the way each character is portrayed. As opposed to the shallow hard case outcast he claims to be, Anton Yelcher’s character is given a subtle amount of depth which later adds to the suspense as he and the rest of the band have their limits tested and are forced to reveal unknown capabilities. Patrick Stewart meanwhile, as the leader of the Nazi cult is not a maniacal psychopath you may have been expecting, he is much more grounded and logical, which makes the whole situation even more unnerving, he is a commanding presence who litsens to the situation and establishes a course of action based on cold, hard facts. It is chilling to behold. There’s also no mercy to be found in the cold and stark cinematography that creates an atmosphere of utter rejection and difficulty.


There’s this underlying grind house sensibility to the film as well, a gritty realism that is also stylised in such a way that it reminded me of the violent siege films of the 1970s, like Sam Peckinpah’s ‘Straw Dogs’ or even more strongly, John Carpenter’s earlier work like ‘Assault on Precinct 13’ (which happens to be a favourite of mine so that is a indeed compliment). In fact ‘Green Room’ reminded me how much I miss those kinds of films, contained thrillers that are not afraid to surprise and shock you, something that a studio would rarely release as it actually challenges and unnerves their audience.


Not for the faint hearted, but for everyone else ‘Green Room’ is a violent and visceral siege movie that packs an intelligent side to it as well.