So we have made it through the first month of summer movie season and it’s been pretty good, not great though. That’s not to say that there were nothing worth seeing or nothing that could not be called great but in terms of kicking off the summer than there’s rally only one typical blockbuster that lives up to expectations but that has already been out for over a month. The rest were either crushing disappointments or ones that simply didn’t catch my attentions I didn’t see them, and while it may be unfair to disregard a movie without seeing it I’m going to go out on a limb here and say that ‘The Angry Birds Movie’ is not the next cinematic masterpiece. Other blockbusters were either crushing disappointments or as terrible as I expected so trust me when I say that when it comes to picking a worst film of the month I was spoiled for choice. But first we have the best.

Richard Linklater’s spiritual sequel to his 1993 classic ‘Dazed and Confused’ may not quite reach the levels of greatness that his original tale of teenagers and their night out following the last day of school, but it is undeniably fun and riotous enough to recapture the spirit of what made it so great.  While its premise may seem playful and shallow it manages to have a distinct and profound nature to it and Linklater’s talents as a writer never mark out when you’re supposed to be moved and when you’re supposed to be laughing, he lets you watch the events and decide for yourself how they impact you. This is a writer who so clearly loves his own characters to treat them with respect yet not too proud of them to never have fun, he just takes it in his stride and sometimes plays it for laughs and at other times he brings forward the drama.

I maintain that this film would have had a much higher box office gross if they went with the title I suggested ‘Punk Rock vs Nazis and Patrick Stewart’ but then again it doesn’t matter, the film itself is still just as amazing. With ‘Green Room’ director Jeremy Saulnier has created a film of claustrophobia and isolation that makes you feel trapped from the outset. But despite this confinement ‘Green Room’ manages to run at a breakneck pace, all the while alternating between tight and edgy conversations and astonishing bursts of violence that really are brutal in a fashion that I haven’t witnessed in a while. Then you have Patrick Stewart to give a threatening and commanding performance that almost steals the entire show. It’s part thriller, part horror and part grind house, and I love it.

After having a month to deliberate and consider, I am now certain that I can call ‘Captain America: Civil War’ the best film by Marvel Studios to date. Whether it’s the best superhero film of all time is a whole other argument, but I will instantly say that it’s good enough to make me think about it. The Russo brothers were able to take a story that could so easily have been a sprawling mess (like no other superhero film, especially not one released this year, under the direction of a certain Zack Snyder) and keep it tight and focussed. The action scenes are brilliantly directed, with particular praise going to the astonishing airport fight that is essentially anything anyone could want from a comic book movie. But at the same time each character is given the right amount of time to grow and develop, none of them exist just for the sake of it they all have some kind of purpose within the film. Then there’s the final emotional gut punch that elevates the movie to a whole new level of brilliance. You’ve probably already seen it by now but frankly if you are looking for something to watch then just go and see it again, it’s still the best thing I’ve seen this summer.


Mother’s Day OR Alice Through the Looking Glass 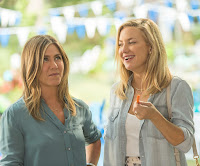 I honestly couldn’t decide which one of these was worse because to be honest they are both terrible but for very different reasons. On the one hand you have a director who is frankly stealing a living by just making the same formulaic schmaltz time and time again (this the third film in a row with the holiday centric ensemble premise from Gary Marshall) filled with bland performances, cliché riddled plot devices and characters so bland and unlikable that I was actually hoping there would be some kind of twist in that the world was ending, but it didn’t. But on the other hand you have a sequel that no one asked for, to a film I already hated more than words can describe that ended up making way too much money anyway, that ended up being just as if not even worse with every shot looking manufactured and fake, actors that so clearly didn’t want to be a part of this franchise anymore and some weird Werner Herzog impression. The only solace I can take is that on a budget of $170 million this film has taken just $103 million, (I like Disney but I have to laugh at that), let’s just hope that it doesn’t break even because then we’ll have to endure another one.
Posted by Joshua Price at 15:48