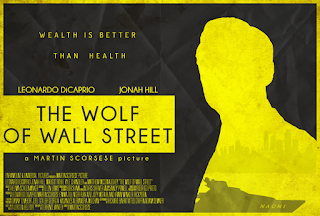 "By the time I turned 26 I was making $49 million a year. Which really pissed me off because it was three shy of a million a week."

Sometimes you can watch a film and wait until the very last scene for it to cement itself as the piece of perfection it was building up to be. Maybe even the last piece of dialogue or action can confirm that status. But with 2013’s ‘The Wolf of Wall Street’ I found myself coming to the realisation that Martin Scorsese had created a modern day masterpiece with the very last frame of the film, it was only at that moment that I truly realised what he had done with Jordan Belfort’s story and how he had made it about all of us.


Following the rise and fall of Jordan Belfort (Leonardo DiCaprio) as he conquers Wall Street, founding his own firm in the early 1990s while in his 20s with his business partner Donnie Azoff (Jonah Hill) and going on to forge an empire of money, escalated by laundering, fraud and scandal at every turn.


‘The Wolf of Wall Street’ is a textbook example of how people can be unbelievably moronic in the way they react to a movie. When it was first released some condemned it as a glorification of immoral acts, but to do so is to completely miss the point of what Scorsese set out to achieve with this film. Belfort has gone on record to say that events depicted in the film are highly accurate, meaning that he and his associated spent decades carrying out their immoral acts and receiving nothing but heaps of money for it, but the public were not up in arms during that time because there wasn’t a movie about it.


But in all fairness ‘The Wolf of Wall Street’ is unique in how it defines its moral compass. One could be forgiven for thinking the movie doesn’t even have one, as unlike any other film to cover this subject are keen to condemn this behaviour both in their narrative and tone. In the narrative of Scorsese’s film his protagonist is met with minimal consequences for his actions. It goes a step beyond anything else Scorsese has done in his career. Even in ‘GoodFellas’ where the narrative is broadly similar to ‘The Wolf of Wall Street’ we witness the debauchery and immoral actions of the characters but are treated to their downfall both on a psychological and monetised level. At the end of ‘The Wolf of Wall Street’ Belfort is still moderately rich, still free to do what he wants and though not wielding nearly as much power as he did before, still holds an influence over people as shown in the movie’s final shot. But more on that later.

Going as far back as ‘Taxi Driver’ Scorsese has always excelled at subjective cinema. That talent is on display again here but rather it also adopts a broader view as seen through the eyes of the characters. We are not just seeing Belfort’s reactions to events around him, we are getting an insight into his entire world view and seeing it through his eyes. Wealth is an affirmation of power, women are objects to be seen as proof of that power and the expense this personal fortune costs everyone else is irrelevant. The movie treats each subject this way because that is how the characters treat it. There’s nothing within ‘The Wolf of Wall Street’ to reaffirm our own moral code because the characters do not have one wither. They know what they are doing is morally wrong, they understand perfectly and they don’t care.


It is for this reason that ‘The Wolf of Wall Street’ has been labelled by film critic Izzy Black to be part of a new genre of filmmaking called Cinema of Excess. Everything about the film is inherently excessive, its run time, scope, cast, tone and entire subject. But this is all a deliberate move to emphasize the excessive lifestyles of the people it is portraying. In other words, a film of excess to portray a life of excess. It refuses to condemn those it portrays and by extension must partake in said excess (am I saying excess to many times in this paragraph). But as I said at the start it is important to undertsnad that just because Scorsese isn’t actively condemning Belfort he certainly is not endorsing him. That is up to you. So with the thematic aspect mostly covered, what of the film itself?


As ever Scorsese directs his film with a sense of pulsating energy that permeates every shot and edit pf the production. Regardless of what the movie is portraying it always feels motivated and purposeful in its drive, reinforcing the characters, atmosphere or general tone. Close ups, long takes, slow motion, distorted perspectives are all used to great degrees of success and never feel like a case of style substituting for substance. As he has always done Scorsese is using these stylistic touches to reinforce the substance of the movie and further convey his story. It may be three hours long but ‘The Wolf of Wall Street’ flies by in a second every time I watch it.


It is the first Scorsese film in quite some time where I cannot single him out as the standout. That honour would go to the man in front of the camera, DiCaprio. In what is without question his best performance to date Leo injects this manic energy into proceedings that to achieve for one or two scenes would be admirable enough, but to maintain it on a consistent level for three hours of screen time is a feat few actors have ever achieved. His ferocity and will power only escalate as the film continues and despite starting as a nervous but ambitious young stockbroker his transition into the megalomaniac Belfort becomes is so gradual that you could easily miss it. His moral values are stripped away one at a time to a point where he has morphed into something entirely different. But what is more remarkable is that DiCaprio takes that manic energy and uses it as a way to convey depth. After a certain point Belfort is financially comfortable enough to retire from Wall Street but he marches on regardless and at risk of jail time. It is not about the money anymore, it is about a way of life and though that is never explicitly said DiCaprio’s performance conveys it perfectly.


After so many collaborations together, ‘The Wolf of Wall Street’ feels like the culmination of everything Scorsese and DiCaprio had been working towards for this phase of their careers. It is actually unclear whether they will work together again given that none of the 74 year old directors upcoming projects are set to feature the actor, but if that was the case I would content knowing that they gave us this.

With DiCaprio chewing the scenery to pieces it would be so easy for the supporting cast to get lost in the background. But with an ensemble as excellent as this that naturally does not happen. Jonah Hill is utterly magnetic in his role as Belfort’s right hand man, to a point where you actually start to question who is the more immoral of the two. Margot Robbie is also impossibly brilliant, adding so much more depth to a role that could have so easily been flat and one note. Even those who only appear for a scene or two like Matthew McConaughey, Jon Bernthal and Jean Dujardin revel in their infectious energy and charisma. Then you have the countless cameos by fellow directors like Spike Jonze and Jon Favreau as well as Rob Reiner whose ferocity never makes us question his role as Belfort’s father.


The list of incredible secondary performers goes on and on, but of all of them the one that best reinforces the themes of the film is that of Kyle Chandler as the FBI agent pursuing Belfort. By the end when he has dismantled the stockbroker’s empire and put him behind bars we get a shot of Chandler still riding the same old subway home. The look on his face at this moment is open for a lot of interpretation, is he content with his simple but morally safe lifestyle? Is he filled with regret, wondering what could have been if he had taken Belfort up on his offer? Or is he torn between the two? It serves to undermine our own reaction to what we have just seen and makes us wonder what we would do under such circumstances.


Which brings me onto the fateful final shot. The last scene displays Belfort years later, working as a motivational speaker in New Zealand. One would think that Scorsese would end his film with a shot of his protagonist whom we have spent so many hours with. But instead he turns his camera towards Belfort’s audience, observing their admiration for him and how he captivates them. This is where ‘The Wolf of Wall Street’ truly transcends itself to become a statement on our very nature. We can tell ourselves all we want that Belfort was an immoral narcissist but we, like the on screen audience, have been entertained and engaged by his actions. In that last shot he turns the screen into a mirror, reflecting our own image back at us. Do we like what we see?


A modern masterpiece that comments upon a twisted character, an entire lifestyle and our own human nature.