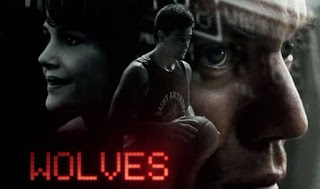 Have you ever watched a movie purely for one person? A movie in which the rest of the cast and crew are people you would never normally look twice at, but whose film contains one component that peaks your curiosity to the point where you had to watch it. Today that film is ‘Wolves’ and the component is Michael Shannon, a supremely talented actor whose inclusion in this film made me assure myself that even if the movie itself was lacklustre I would surely be treated to a good performance, right?


Anthony (Taylor John Smith) is a standout player on his Manhattan high school's basketball team with seemingly everything going for him: a killer three-point shot, a loving girlfriend, and a chance at a scholarship to Cornell. But Anthony's dreams of playing college ball are jeopardized by his volatile father (Michael Shannon), a hard-drinking writer whose compulsive gambling threatens to derail the lives of both his wife and son.


I was surprised by how strong ‘Wolves’ was in some aspects of its execution, and how bland it was in others. It feels like almost every good aspect is let down by an uninspired and mind numbingly predictable piece of storytelling that is unsubtle, far too easy to foresee and infuriatingly slow paced. That is not to say movies with a predictable plot cannot be excellent, but when the film itself seems to draw such tension over what will happen next when everyone in the audience correctly guessed five minutes ago leads to a movie that has an agonizingly slow pace.


Writer and director Bart Freundlich clearly has a love of deep rooted details. He revels in the nuances of his environment and these aspects help draw the audience in and further immerse within this world as a fully realised location. The space he crafts for his characters has a richness to it and feels truly lived in. Freundlich’s direction takes time to absorb these details and allows the audience to observe them as well.


But where the direction picks up on the small details it loses sight of the overarching themes of the movie. Each plot point plays out in a predictable manner and moves forward without any sense of urgency which didn’t keep me engaged at all. The slow pace would be fine if the story kept me guessing over where exactly it was heading but as I said already it absolutely did not. I found myself willing the movie to pick up the pace and fast forward past the next predictable moment in order to get to something I was not expecting, but sadly it never did.

As I said at the start though I was mostly here for Shannon’s performance and he does not disappoint. While it is far from his best work in the likes of ‘Take Shelter’ and ‘Nocturnal Animals’ he is supremely confident in his handling of the character. He clearly conveys the damaged nature of the character while keeping him appropriately grounded in the real world to add to the sense of realism. On a surface level there is no massive dramatic heft but that approach seems to suit the nature of the movie around him.


As you would expect Shannon is the stand out but I was surprised by how well the other actors managed to stand beside him. Taylor John Smith is convincing and actually conveys a sense of depth in his role. The only problem in question is that his role in question seems to be inconsistent in his motivations and general attitude towards each unfolding problem. From a writing standpoint it feels confused over what role the character should serve in the story and how he relates to the unfolding film around him.


In many ways the character sums up a lot of the movie as a whole. Though it is commendable for the way it tries to integrate various elements of drama from your standard grounded domestic disputes to a classic coming of age tone. But none of these elements seem to merge properly, despite each one being richly detailed they don’t meld together as a compelling drama. It feels easy to believe the world these characters inhabit but I could never become invested in the actual character drama which ultimately made the movie fall flat as a result. Nor does it help that the story incorporates every dramatic cliché one can imagine to an almost distracting point so even if the film doe build up any dramatic heft I can’t help but think it feels contrived and uninspired more than anything. Of course there is nothing wrong with a standard story if it is executed very well, but ‘Wolves’ is so predictably slow that there is little else you can do but sit back and observe from a distance.


Despite boasting some good performances, ‘Wolves’ feels too standard and too formulaic to stand out as a compelling drama.