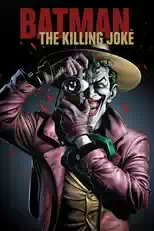 "Why aren't you laughing?"

So with petitions to close down Rotten Tomatoes based on their negative reviews of DC movies (yes, that is actually a thing) despite the fact that Rotten Tomatoes itself does not actually review movies and merely amalgamates the reviews of many critics and summarises them into a combined percentage. But with all the chaos and controversy that has been unfolding recently we can still count on our direct to Blu-Ray animated movies right?


Based on the legendary and ground breaking novel by Alan Moore ‘The Killing Joke’ examines the thing and fragile line of morality that separates Batman from his arch nemesis The Joker. Following another escape from Arkham Asylum The Joker attempts to prove his point concerning the fragility of sanity by torturing Commissioner Gordon in order to drive him insane. Batman sets out on a hunt to stop him before it is too late.


So this is quite an anticipated movie to say the least. An adaptation of one of the greatest comic books of all time with Kevin Conroy and Mark Hamill returning to voice their iconic roles of Batman and The Joker as well as being the first DC animated movie to receive an R rating. So in a summer where so many superhero movies have failed to live up to our expectations does ‘The Killing Joke’ succeed? Not in the slightest.


That is somewhat harsh because there are in fact several good things about the film, but most of them are ripped straight from the graphic novel. I understand of course that this is an adaptation and at the end of the day I should review the film as its own separate entity, judging it as a whole regardless of how much it lifts from the novel. However it is hard to ignore the almost disconcerting change in tone and quality as the added context of the film is over and it becomes a literal, shot for shot, word for word adaptation of Moore’s novel and as someone who is so familiar with said novel it was difficult for me not to notice.


The second half of the film is where this takes place and it is fantastic, with the same themes being brought forward and the same storylines being played out to perfection. The way the characters act and respond in this section fits in with our associations of what makes them the way they are and with such a deep exploration of the relationship between Batman and The Joker the story is essentially an answer to the question ‘what separates the good guys from the bad guys?’ I won’t spoil it on the off chance that you have not read the graphic novel but rest assured it is a haunting and deeply meaningful read.

Notice I said read there because I would recommend simply reading the novel over watching this adaptation. Not only is it shorter and less time consuming it is also far more visually interesting and intensely paced. As I said before most of the best parts of ‘The Killing Joke’ are the parts taken straight from the novel so I can’t really think of a reason why I wouldn’t simply recommend that to you. Not least because there are some decisions made with this adaptation that even manage to lessen the effect of the novel’s storyline.


Not only does the added context’s shift in tone make the film as a whole feel like two completely different films stitched together but it drags on and takes the focus away from the bulk of this story. The added context is focussed more on Batgirl which if you’ve read the novel, on the face of it seems like a very good idea, given the events that are about to unfold adding some depth to her character in this brief moment beforehand could bring a greater weight to what is about to happen.


However what happens here does not quite work that way. Instead of humanising her she is made to look like another sexualised cliché and in the end it only hurts the films tone overall. It also shifts the character focus so that when we finally arrive at the central adaptation it becomes more disjointed as now Batman is the primary focus when in the first half he felt like a secondary character. Worse still is how certain creative choices in the first half not only seem illogical at the time, but completely change the character dynamic and their relationship later down the road, meaning that certain scenes of the novel are made to feel drastically different now, for all the wrong reasons.


The voice work is fantastic but I probably didn’t need to tell you that. With Conroy and Hamill reprising the roles they’ve homed for so many years it is almost a given that their return would be just as brilliant. Sadly the animation can’t quite match their talent, becoming clunky and artificial. I understand that the budget might not allow ‘Akira’ levels of animation but at the very least I would expect something that could have the same quality as, say, ‘Batman: The Animated Series’. Is that too much to ask?


A film that can’t live up to its own voice work and source material.