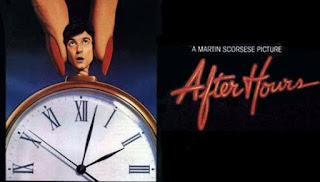 "Is that unbelievable or what?"

Many people will site ‘The King of Comedy’ as not only Martin Scorsese’s most underrated movie but also his most darkly comical. However in my opinion the people who say that have never seen ‘After Hours’ that for me is not only Scorsese’s funniest film but also one of his most unfortunately overlooked films, as well as one of his absolute best.


The film follows Paul Hackett (Griffin Dunne) as he experiences a series of misadventures while making his way home from New York City's SoHo district during the night.


You give a director like Martin Scorsese a basic premise like that and revel to see what he does and with ‘After Hours’ he does not disappoint. It is a comedy but in a way that only Scorsese could execute one. It is wracked with tension and at times becomes almost nightmarish in its desperation, but at the same time it never invokes a sense of fear or dread, somehow retaining its sense of humour through each escalating sequence.


The nightmares Hackett confronts on his journey are trivial as well as tragic and every one of them is oddly hilarious. Despite being a complete bombardment of bad luck that appears to be random it is revealed to be connected in the most satisfying way imaginable, that allows the story to be eligible but also retain a sense of the illogical that prevents any potential constraints on the story or characters. Each character in question is sharply written and though many of them are simply caricatures passing through the film in fleeting incidents it works for the tone as that is exactly how Hackett sees them as they pass by.


But despite being brief each character is brilliantly memorable due to both the writing and the actors portraying them. Rosanna Arquette plays a woman that speaks worryingly of her lover whose unhealthy obsession with ‘The Wizard of Oz’ has led him to start calling her Dorothy in bed. Then you have Teri Garr as a waitress who has spent so long in New York trying to make sense of the city that it has driven her around the bend. If this is all too bizarre for you then Linda Fiorentino is on hand for a darker and more sardonic approach to things.


Where Scorsese used ‘Mean Streets’ and ‘Taxi Driver’ to display the darker, violent and guilt ridden side of New York ‘After Hours’ displays its more whimsical side. That is not to say it is completely detached from reality but being a Kafkaesque state of affairs makes it a perfect balance between the obsessiveness we have witnessed in other Scorsese films and the comedy that up until this point we had never really seen in full flourish.

The film never loses its sense of intensity and drive though, with Hackett moving from one bizarre scenario to the next with such conviction and desperation that it is almost impossible not to sympathise with him. When he finally gets a second to catch his breath and tries to explain what has been happening all night he has to pause as he realises how it sound so utterly implausible that is almost can’t have happened.


The film may on the surface resemble a farcical comedy but when one peels back its layers it is a brilliant emotional rollercoaster. By the end you almost feel as wrung out and exhausted as Hackett who is portrayed brilliantly by Griffin Dunne. His performance verges on the dramatic and horrific multiple times throughout these misadventures, yet never quite crosses that line and manages to keep the tone of the film as comedic, even with its darker elements.


The energetic and frenetic pace of the narrative is matched brilliantly by both the direction and the cinematography. It highlights the vibrancy and wonder of the city around Hackett but never pauses or contemplates it too long to let us breathe, the camera almost seems to glide through each incident and when it grinds to a halt with the character it is as infuriating for us as it is for him. The neon lit streets of New York can sometimes resemble hell in the same way they did in ‘Taxi Driver’ with the ominous buildings towering above and the copious amounts of smoke billowing from the sidewalk but at the same time the wonderment and fanciful aspects are kept intact and these small and strange details are what separates ‘After Hours’ as another masterpiece in Scorsese’s filmography.


There is also a distinct personal connection between its director and its content. Paul Hackett is a man who tries to navigate the complex and sometimes bafflingly aggressive world around him to simply do his job. At the time of making this Scorsese was marred in problems during the production of ‘The Last Temptation of Christ’ and simply wanted to pull back, make something more light hearted and whimsical that retained his unique stylistics but also captured his own frustrations with his career. He just wanted to do his job but it felt like everyone was against him.


‘After Hours’ its horror and humour in a way few films have, an overlooked masterpiece.