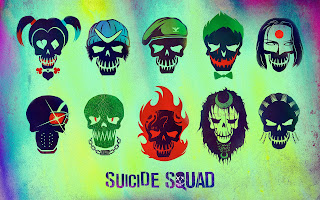 The amount of pressure that has been placed upon ‘Suicide Squad’ is quite an unfair amount and one I’m sure that few people envisioned whilst making the film. With the commercial and critical failure of ‘Batman v Superman’ still hanging over the DCEU it was up to David Ayer to salvage the franchise and bring fans back on board, also with an incredibly lacklustre summer movie season audiences and critics everywhere were counting on ‘Suicide Squad’ to be the one glorious blockbuster we’ve been waiting for all summer. Is it all those things and more? No.


A secret government agency led by Amanda Waller (Viola Davis) recruits imprisoned supervillains and assembles them into a team, offering them leaner sentences in exchange for their services to execute dangerous black ops missions and save the world from a powerful threat.


As we saw with ‘Batman v Superman’ fan backlash against the critical reaction to this film has been a severe one, with fans spamming IMDB to award to film a perfect score (before the film even came out nonetheless), petitions to close down Rotten Tomatoes (even though that’s the equivalent of trying to shut down Google because it showed you negative reviews of ‘Suicide Squad’ when you typed in “Suicide Squad Reviews”) and a general amount of hate sent towards any critic that dares to do what they are professionally paid to do and speak their mind about a movie they just saw. I’m going to say this once because if you enjoyed this film and had legitimate reasons for liking it that go beyond simply seeing characters you have heard on brought to life on the big screen and being able to validate that opinion without accusing other critics of being corrupt or “anti DC” then good for you. At least someone liked it.


Personally though, I found the film to be an abhorrent, dull, embarrassing and nearly incomprehensible mess. At the very least I can say that this DCEU is consistent, consistently bad. Reports indicated that ‘Suicide Squad’ was subjected to numerous re-writes, reshoots and re-edits and it shows. The movie lacks any kind of cohesive structure and instead resembles one drawn out action scene that is so choppily edited that is simply becomes disorienting. It tries to desperately to feel energetic and relevant when in reality there is barely anything to work with in the first place as the set pieces and story are so bland and generic that the film melted into a hot pot of what seemed like good ideas a long time ago but had been subjected to so much inference and tinkering that they now assembled a faceless and unrecognisable mess.

None of this is helped by how dark the film is and I don’t mean that when referring to the tone, I mean the film itself is literally overly dark as if the lighting manager went on strike. None of the scenes feel fully lit which either means that Warner Bros were incompetent enough to forget to remove the sepia tone or they felt that they were somehow compensating for how ridiculous the rest of the film was in comparison to what had been promised to be a gritty and realistic film. One consistent issue I’ve had with David Ayer’s movies is that he establishes a gritty and realistic tone within the film only to end in an over the top and unbelievable finale. In ‘Suicide Squad’ however I would have killed for an over the tope finale because the rest of the film felt incredibly clichéd both within its story and general direction that a balls to the wall finale might have given the film a redeeming quality, but it was not to be.


‘Suicide Squad’ also fails to live up to its promise of blowing Marvel away when it comes to the villains. The main antagonist of the film not only has the shallowness and lack of depth that the worst Marvel villains have but they are also even more forgettable. Their villains turned heroes on the other hand are not given nearly enough depth or characterisation to justify their sudden mood swings and change of loyalties, with so many plot elements being driven by the decisions of each character you would think they would want to establish why these characters are making said decisions, but instead we get unclear flashbacks that someone thought would establish the character’s motivation but ultimately fails as well. Their other attempt to draw depth and exposition out of each character is their soundtrack, but when you have to resort to your films music to substitute for the lack of written complexity then you have a serious problem, especially when the soundtrack is as poorly used as this one is.


The only upside are the cast portraying those characters who for the most part are fairly decent. Will Smith is essentially playing a more sombre version of himself, Margot Robbie is feisty and energetic as Harley Quinn but the screenplay decides to make her the quippy one line spouting machine so often that it becomes cringe worthy. Jai Courtney is good and I can safely say I never thought I’d be writing that in a review. Viola Davis could be the standout as she was the only genuinely intimidating person within the cast. As for Jared Leto’s Joker, well he is eccentric and wild and might have had more of a chance to grow on me if he was in the film for more than ten minutes, but with the amount of screen time we got the Oscar winner doesn’t do much to distinguish himself from other incarnations of the clown prince of crime or tap into that darker side we have come to know him for.