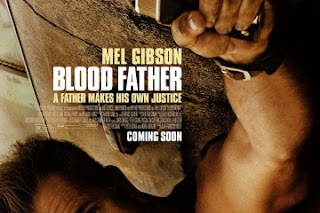 So who’s in favour of skipping the obligatory recounting of Mel Gibson’s various statements and controversial acts in favour of focussing on the quality of the most recent film he is starring in rather than simply alienating readers, spouting needlessly outrageous political views and potentially offending anyone who belongs to one of the groups insulted by Mr Gibson? Is that everyone? Good because I know I am.


John Link (Gibson) is a war veteran and ex-convict is out on parole, trying to go straight and clean up his act. However when his estranged daughter Lydia (Erin Moriarty) turns up, carrying a fair amount of baggage in the form of a drug cartel assembles of murderous thugs seeking revenge against her.


Despite that rings startlingly close to ‘Taken’ in which a highly skilled and dangerous father returns to his former ways of violence in order to save his daughter, ‘Blood Father’ manages to transverse the usual clichés that could potentially weigh down this story and instead goes into a much further exploration of the character dynamic as well as a more brutal portrayal of the violence taking place within it.


That is partially a result of having a much stronger female character than the usual, vulnerable damsel in distress kind of role. Lydia is not only a far from perfect daughter, and somewhat reflective of her father’s tumultuous history, but she brings about this crisis on herself through her own actions. It means that the ensuing journey is not just a typical run of the mill action thriller but also a story of redemption and forgiveness for more than one of the characters. The fact that the movie establishes such a strong connection between John and Lydia both thematically and emotionally is the driving force of the film, and serves to further both the narrative and development of the main characters.

This sense of imperfection (that thing that real people have and action directors/writers seem to forget about) carries over to Gibson’s character as well. There is no secret arsenal stashed under the floorboards, no team of former colleagues to call and find the nearest exit and no instant relapse into his old ways. John Link feels like a real, world weary character, one that has endured scars and troubles but has clearly taken the toll from them. The way he takes down the various bad guys is not with the demeanour of an unbelievably skilled fighter, the way his character ploughs through the action feels like the reality of the situation, and that reality is that a sixty year old man has been thrust back into a violent world against men half his age. Not only that, but there is a sense of vulnerability to him not just on a physical level but on an emotional one as well, a character seeking redemption for his failings as a father who yearns to compensate for those shortcomings ion the only way he knows how.


These characterisations are not only brought forward with the writing but also the performances. Gibson’s charisma is almost inescapable as it bleed its way onto every frame he occupies. This greying and distant attitude makes the character feel more believable and fleshed out, but no mistake, Gibson remains in full command of every scene he is in and never for a second leaves you in any doubt that he has the ability to kill whoever he wants, whenever he wants. Moriarty is also decent in her role but occasionally struggles to share the spotlight with Gibson and often gets left in the dust. William H Macy offers a slightly more comical but no less interesting performance and Diego Luna makes a menacing and suitably unstable antagonist.


This description only serves to build the film up as more of a nonstop action, thriller. However one striking feature of ‘Blood Father’ is how the action regularly seems to take a back seat in favour of further developing the characters. While the pacing suffers somewhat in between these set pieces the performances and writing are satisfactory enough to carry them. With the direction adopting a grindhouse sensibility that helps maintain a consistently gritty and down to earth tone. The finale in particular sees both the director Jean-Francois Richet and Gibson himself saving their most valuable assets until the last moment to end fairly spectacularly. None of this is quite enough to elevate ‘Blood Father’ above the status of mid-level thriller that it occupies but it helps it leave a lasting impact and become a pleasant surprise.