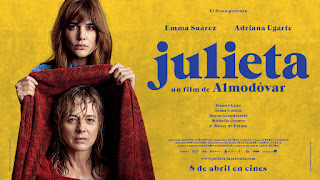 When it comes to modern directors Pedro Almodovar remains a bit of a blind spot for me. I’m familiar with some of his more popular films like ‘Volver’ and ‘The Skin I Live In’ (both of which were excellent) but as far as the rest of his filmography is concerned I have a lot to catch up on. This means I don’t necessarily have an established impression of what level I should expect from him other than the two films of his that I have seen, which are very good. If ‘Julieta’ speaks anything about the quality of his work then I will have to check the rest of them out as soon as possible.


Told over 30 years, with two actresses (Emma Suárez and the younger Adriana Ugarte) playing one woman, this is the story of Julieta, who after a chance encounter is left heartbroken and looks back on her life and relationship with her estranged daughter.


From what I can gather about Almodovar’s body of work ‘Julieta’ is far from unexplored territory for him. But that seems to say just as much about the quality of his filmmaking as it does the style of his directing. ‘Julieta’ serves as a sombre study of grief, regrets and guilt but rarely feels overtly dark or depressing. While there are high strung emotions to be found within the film they are initially concealed and difficult to pick apart, and slowly reveal themselves over the course of the 96 minutes. During which the plot takes numerous twists and turns that succeeds in making the characters emotional arcs all the more riveting and intriguing.


One of the reasons why ‘Julieta’ is so riveting it due to Almodovar treating the material less like a typical melodrama and more like a thriller. Even the direction has subtle undertones that reveal information and emotional exposition piece by piece, allowing the story to unfold and progress at a natural pace, but one that never feels dull or delayed. Even the score reminded me of something Bernard Hermann would craft to accompany a classic Hitchcock thriller.


The film carries many underlying themes and does so with consistency and brilliant attention to detail. Almost every scene reflects the overall message of the film, themes of guilt and burdens are brought up time and time again, across decades and generations. The way the film transitions from flashbacks to present day is brilliantly structured, made to toy with our expectations and deliver the full emotional punch at exactly the right moment.

But while the two eras meld together excellently they are also clearly distinct and distinguishable. The downside of this is that the film as a whole can occasionally feel somewhat disjointed but the benefit is to fully understand the titular character. We understand the lasting effect that certain events have on her, what aspects of her personality change and how she chooses to deal with them. This is all emphasises by the two brilliant performances that bring Julieta herself to life. When we first meet Emma Suarez as the character there is an instant sense of inner demons and conflicting emotions, and they act in such contrast to the wide eyed innocence of Adriana Ugarte’s younger portrayal that when we see the two synch up it is a powerful revelation.


What is more remarkable about the two performances is how frequently Almodovar’s direction puts them under pressure to carry the central conceit of the movie. The camera practically asks us to read the two actress’ emotions as it presses close to their expressions, trying to scrutinize every detail of their performances in order to gain some kind of clue that will help unravel the emotional mystery at the centre of it all. But that is not the only trick Almadovor uses to further his story. The way he employs visual storytelling and repeated motifs throughout the film is spectacular, from the use of colour to his subtle and metaphorical transitions, they all reflect the character’s emotions and inner turmoil. You can spot it everywhere from the fixtures to the decorations, everything is steeped in importance and meaning. This is the kind of film you could watch with the sound muted and still feel the emotional weight behind every scene.


As I said at the start of this review I have only had the pleasure of watching two other Almodovor films, ‘Volver’ and ‘The Skin I Live In’. ‘Julieta’ feels more straightforward than both of them with the former being a genre collision of farce, tragedy, melodrama and magic realism while the latter was described by its own director as “a horror film without frights or scares”. That is ever so slightly disappointing for ‘Julieta’ to feel less playful and have more of a one note tone however it compensates for that with its sheer dramatic impact.


‘Julieta’ is as emotional as it is masterful, while it’s more straightforward than other Almodovor efforts this concentrated focus allows him to create a dramatic and riveting web of feelings.