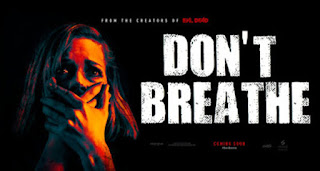 Horror films have a tendency to catch fire at the box office, especially a really good one. That is not to say this one will but on the whole it seems that the general starvation of recent horror is reflected by how much money a decent or unique movie can rake in. Whether it’s a bad but unique movie such as ‘Unfriended’ or ‘Paranormal Activity’ or a genuinely decent scare vehicle such as ‘The Conjuring’ or 2013’s ‘Evil Dead’ they seem to be a profitable business. Speaking of ‘Evil Dead’, from the same creative team comes ‘Don’t Breathe’, but is it any good?


A group of cash strapped teenagers elect steal some money out of desperation. The target they choose is the home of a blind man (Stephen Lang) who supposedly has a safe in the basement. However they discover the blind man may not be as helpless as he seems and soon they are caught in a deadly game of cat and mouse with a man willing and capable to kill them all.


It is my belief that the best horror movies are established from simple premises, from a single hostile creature aboard an isolated spaceship to a little girl being possessed by a demon (there are some exceptions to this rule but for the most part it seems to work). Before you get any ideas I am not about to say ‘Don’t Breathe’ is on par with either of those examples but it is a meticulously crafted thriller that takes a simple premise and creates one of the most intense and pulse pounding films this year. Or it would be if it was not for ‘Green Room’ but that’s beside the point.


By making their antagonist a human being as opposed to the recent supernatural trend that many horror movies follow, ‘Don’t Breathe’ invokes real stakes and meaning. There is something formidably terrifying and threatening about another human over some faceless ghost, in the same vein as Michael Myers or Jack Torrance. Not only that but the film utilises its antagonist’s physical abilities and incorporates them into its techniques to draw more tension out of the situation. With a blind man as your hunter sound becomes a big part of the film, and not only is it fascinating to witness the characters solve each problem when their potential killer can hear their every action but the sound design of ‘Don’t Breathe’ is some of the best I’ve seen in any horror film of recent years. It places emphasis on the slightest noise and lingers in the silence, making you more perceptive to the major narrative driving force that is sound.


That narrative in question is also propelled by some clever pieces of writing. Despite the fact that the films plot summary would only be a few sentences longer than its premise the film incorporates enough twists and turns to create plenty of surprises. The characters suffer from a usual trope of the genre in that they ultimately take a back seat to the movies own premise and are far from fleshed out individuals. That being said the movie provides you with enough backstory to make them sympathetic to a certain degree and therefore you have a serviceable amount of emotional attachment which only emphasises the intensity of the unfolding drama. But still I have to wonder how much better the film as a whole could have been if I genuinely cared about these people.

If anything the most interesting character proves to be Lang’s blind man. He remains a threatening presence throughout and for the most part the filmmakers establish his limitations which comes in handy whenever they feel like surprising the audience by subverting those expectations. My immediate concern was that I would sympathise more with the ass kicking blind man protecting his property than the dumb teenagers trying to rob the place, but as the film progresses Lang goes from empathetic to contemptible and becomes all the more threatening for it.


Due to adhering to those previously established advantages and disadvantages ‘Don’t Breathe’ raises palpable amounts of tension through anticipation and claustrophobia. When the teens first break in to the house it’s only later in the movie that you realise what you witnessed there was a meticulous layout of the house to make you aware of its geography and contents that will prove to be vital later on in the movie. It reminds me a lot of the opening to Hitchcock’s ‘Rear Window’ in which every vital story component is laid out right in front of you, so subconsciously you are intimately familiar with your setting.


Somewhat frustratingly the films biggest flaw is its ending, which not only undermines certain aspects of the film that have proceeded it but also feels unnecessary. The film was one edit away from being as close to perfect as it could be but with one extra sequence the films pacing is thrown off and suddenly instead of bounding towards its closing credits at a break neck speed it crawls forward for its last few minutes, making it feel far longer than 88 minutes.


A tense and taught thriller with meticulous direction and impeccable sound design, let down only by its final stroke.