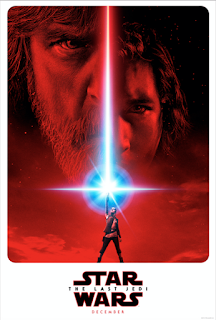 So as legions of ‘Star Wars’ fans come together in Orlando for the annual celebration of all things relating to a galaxy, far, far away it came as little surprise that Disney used the opportunity to drop more information surrounding the much anticipated ‘The Last Jedi’. Naturally that included a teaser trailer but before that, let’s address the poster they also revealed because it really is a thing of beauty. It’s vibrant, beautifully illustrated and if you’re into visual metaphors that may foreshadow the development of your protagonist it’s about as good as you can get. Rey, caught right in the divide between the last Jedi himself, Luke Skywalker (in ‘Return of the Jedi’ shortly before his death Yoda said to Luke “When gone am I, the last of the Jedi will you be” so until I hear otherwise that’s what I’m assuming the title is referring to) and the freshly scarred Kylo Ren as he continues his own treacherous path down the dark side.


As ever I’m avoiding plot speculation in favour of just judging the trailer itself and what questions it raises. I must that admit that upon my first viewing I did feel somewhat underwhelmed, this trailer is certainly a far cry from the one we received at the 2015 celebration for ‘The Force Awakens’ but upon reflection I’m very satisfied with what we got. One must remember that the trailer for ‘The Force Awakens’ was almost clinically designed to cement the idea that ‘Star Wars’ was returning not just as a film, but as a phenomenon. Soaring music, uplifting visuals, “Chewie, we’re home”, they were all playing into the hype that ‘Star Wars’ was well and truly back.


‘The Last Jedi’ trailer does not need to convince us of that. What it is conveying instead is an atmosphere and mood. It takes a more sombre and muted tone (and or about as sombre and muted as you can get with ‘Star Wars’) and hopefully that is a sign of what is to come. When it comes to whether it gave away too much the answer is a resounding no of course. It gave us just enough to contemplate without providing context to any of those impressive looking set pieces.


The trailer certainly establishes the idea that ‘The Last Jedi’ could be a more morally ambiguous affair, Luke’s statement regarding the fact that the situation is much bigger than a simple light vs dark mentality is very promising in that regard. His last chilling line only hammers home that feeling. True the last line is certainly a tease, but what else are trailers supposed to do at their core. It is there to convince you to go and see the film because doing so will give you context to that final chord, unless you’re ‘The Amazing Spider-Man 2’ of course.

What also struck me about the trailer was its visuals. Rian Johnson is a very different filmmaker to JJ Abrams and that is clear from the contrast of ‘The Last Jedi’ compared to ‘The Force Awakens’ but the effect is not too jarring to make us forget this is in the same universe. There are a number of brilliantly composed shots which probably owes a lot to Johnson brining Steve Yedlin to the role of cinematographer, whom he worked with on ‘Brick’ and ‘Looper’. The colour pallet seems a bit more restricted, as if to set us up for the darker road that lies ahead. After all when one considers ‘The Last Jedi’ stands as the second instalment in this trilogy we can safely say Johnson has quite an act to follow. It’s either ‘Attack of the Clones’ or that other little movie, so talk about a low basement/high ceiling situation.


Then of course the trailer draws in all kinds of questions regarding where our favourite characters are by the start of the film and where they will go from there. Finn is clearly still recovering from his encounter with Kylo, Rey is undergoing training with Luke and Poe is still fighting the good fight. For all the speculation on narrative, themes and details, it is the characters that continually drive ‘Star Wars’ forward and out investment with them is essential to that. This trailer has me intrigued and it’s going to be a long wait until December.
Posted by Joshua Price at 10:53