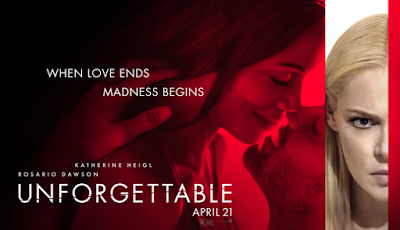 "You took everything away from me."

I have to confess every now and then I do watch a film for the explicit purpose of hoping it will be bad, not just so I can write a scathing review but also to remind myself and everyone just how lucky we are, especially this year. With movies like ‘Get Out’, ‘Logan’ and ‘Raw’ it is refreshing to be reminded just how miraculous a quality product is when one can also witness such terribleness, and  it helps to actually have your expectations met. I expected ‘Unforgettable’ to be terrible and it was.


Tessa (Katherine Heigel) is barely coping with the end of her marriage when her ex-husband, David, becomes happily engaged to Julia (Rosario Dawson). Trying to settle into her new role as a wife and a stepmother, Julia believes she has finally met the man of her dreams, the man who can help her put her own troubled past behind her. Tessa's jealousy takes a pathological turn, and she will stop at nothing to turn Julia's dream into the ultimate nightmare.


Obviously I’m tempted to make the obligatory statement that both summarises the quality of the movie and playing on said movie’s title by calling it completely forgettable, and the reason is because there really isn’t any other way to describe ‘Unforgettable’. True, it is complete trash both in its content and quality, but if anything the movie might actually benefit from being a little worse than it was. There is a sleek and glossy look to the film that, when combined with the awfulness of the movie itself, makes it a bland and generic piece of garbage. One that leaves no lasting impression or impact in any way. Films like ‘The Bye Bye Man’ and ‘Fifty Shades Darker’ astounded me with their awfulness, but I’m honestly struggling to say anything about ‘Unforgettable’ at all.


That being said there are no shortage of spectacularly horrible details in ‘Unforgettable’ that can leave the viewer in no doubt that this was written by someone who has no understanding of their own subject matter. Mismatched sound effects, modern laptops that load pictures one line of pixels at a time, the fact that people steal numerous items while the original owner never seems to notice and the ability to find anything and everything about someone you know with a Google search. I understand that people put a lot of information on social media, but the level of knowledge these characters have of one another just from a browse on the internet is on a level you would not gain even if you were living with that person for a year. It’s ridiculous. 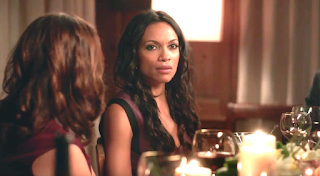 As I said before, if these ludicrously campy plot elements were in a film with a rougher exterior and campy acting to match they might be funny. But ‘Unforgettable’ is so polished that it almost makes those errors even worse. The direction, with its intense close ups and drawn out moments of what I think are supposed to be attempts at tension, suggests that I’m actually supposed to be taking this train wreck seriously. With the plot being as painfully forced and convoluted as it is, I’m baffled by how anyone involved in this movie thought they would be holding the audience’s attention because I suspect the people who haven’t walked out are too busy laughing. Either that or they have somehow been incapacitated and are physically unable to leave, that is the plausible explanation as to why you would still be watching.


I suppose a few people might be slightly intrigued by the films structure as it does unfold in a non-linear fashion. It begins at a moment of intrigue and then flashes back so it can gracefully lead you back to that point whilst answering all your questions. Except it does not do that at all. As I said not only is the plot mind numbingly contrived to a point where it feels like they genuinely just started with that opening scene and said “make it go there no matter what”. The events depicted don’t even seem to fit into the timespan between the two points. It’s as if they are punishing the audience for paying attention. So as well as being repetitive, shallow and completely lacking in rational thought, the screenplay can’t even grasp a basic understanding of time.


The crowning achievement though, has to be the performances. One again they are by no means terrible, or at least a significant amount of them are not. Rosario Dawson is perfectly fine, in fact she’s probably giving the most worthy performance out of the cast, but it does nothing to lessen the impact of blandness. This inherent feeling lying within ‘Unforgettable’ that no one involved with this film had any inkling or second of thought that this movie was actually worth caring about. They just turned up and did a job, and they did it horribly.


‘Unforgettable’ may be the most misleading a title a movie like this could ever receive.