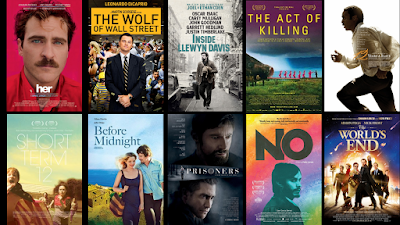 Not only was 2013 a year in which we saw cinematic treats push the boundaries of what was technologically possible, we saw talented filmmakers render emotion and craftsmanship together in a way I can’t remember any other year in recent memory doing so prominently. Granted, every year sees a fine selection of movies (hence why I’m able to cobble together a top ten for every year) but the way 2013 seemed overflowing with provocative and perfect cinema struck me as a unique surge of emotionally driven films that never put sentimentality over quality, striking a perfect balance in between. But what is even more remarkable is the way in which my favourite (and what I also believe to be the best) film of the year did so in a way I could never have possibly imagined.


But before all that I have the usual honourable mentions to forego. The first would be Woody Allen’s excellent ‘Blue Jasmine’ in which Cate Blanchett delivered one of the best performances of the year and Allen’s unique handling of the human condition returns at its charming and complex. Speaking of elegant poignancy and things relating to blue I have to mention the Palme d’Or winning ‘Blue is the Warmest Colour’ for its deep thematic and emotional resonance.


It was an excellent year for low key dramas in the form of Ryan Coogler’s ‘Fruitvale Station’ and ‘All Is Lost’, each featuring a tour de force from their leading men Michael B Jordan and Robert Redford. While on the subject of great male performances we also can’t forget ‘Dallas Buyers Club’ that saw Matthew McConaughey and Jared Leto revealing new levels of excellence.


This was also a year of experimentation, with a number of movies that excelled on a stylistic level as well as an emotional one. The first is Jia Zhangke’s fragmented drama ‘A Touch of Sin’ that is too stylish to ignore even if its screenplay is not quite as elegant. The second is ‘Upstream Color’ by Shane Carruth. Everyone was expecting the director of ‘Primer’ to return with an equally mind bending affair, and his second directorial effort is that and more, boasting an evocative and endlessly thought provoking screenplay and superb direction to match. Finally is Bong Joon-ho’s ‘Snowpiercer’, a science fiction fable that dissects classicism more effectively than any social drama could. 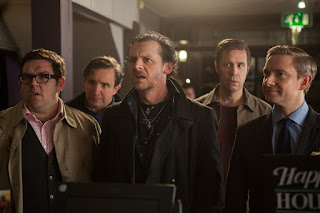 In terms of sheer enjoyment, nothing else this year comes close to the final instalment of Edgar Wright’s Cornetto Trilogy. Wright continues to set himself apart as the finest comedic director of our generation, brining all of his prowess behind the camera to give his film such a sense of hilarious energy that it is almost infectious. What makes Wright even more remarkable is his ability to infuse any sequence with something to make it interesting, the most mundane detail or standard conversation can suddenly become as riveting as his action or comedy scenes. The cast are also on top form, particularly the ever present Simon Pegg and Nick Frost who really demonstrate their true talent as the dynamic of their duo is reversed in ‘The World’s End’ compared to their previous outings, ‘Shaun of the Dead’ and ‘Hot Fuzz’. Though this third film is not quite as perfect as its predecessors it is still terrific in its own right. 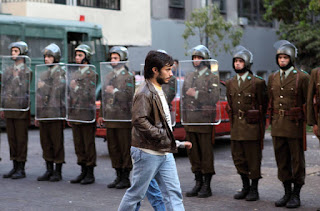 When Pablo Larraín decided to bring a long unpublished play about an advertising man working in Chilie during the 1980s to the big screen few would have expected it to be as superb as this. ‘No’ portrays  the historical moment of advertising tactics in political campaigns as in the 1988 plebiscite, when the Chilean citizenry decided whether or not dictator Augusto Pinochet should stay in power for another eight years and its director finds a keen balance between the historical weight of his story but also the humane elements that make it so engaging. Not only has that but the brilliant detail of the movie shined through everywhere, such as the fact that it was filmed on the same  ¾ inch Sony U-matic magnetic tape which was widely used by television news in the 80s. That kind of detail allows the film itself to feel like an authentic piece of history, but here it’s much more fun. 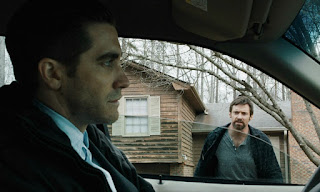 Despite achieving great success and praise on the festival circuits for his earlier films ‘Polytechnique’ and ‘Incendies’, it was this 2013 film that marked Denis Villeneuve as  major creative force to be reckoned with. Boasting one of the best performances Hugh Jackman has ever given as well as equally brilliant turns from Jake Gyllenhaal, Viola Davis and Paul Dano, this psychologically twisted thriller is as provocative as it is haunting. Villeneuve’s direction never fails to pick up on the emotional complexity and existential dread of the situation at hand, elevating this relatively standard story to unprecedented levels of excellence. Villeneuve’s understated approach is one that is unique in modern cinema. It is not flashy or overtly distracting, it is simply good old fashioned filmmaking as he gets right to the heart of the matter and rarely looks back from there. 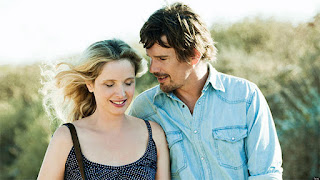 It was 18 years ago that ‘Before Sunrise’ first introduced us to the empathetic characters of Jesse and Celine, played exquisitely by Ethan Hawke and Julie Delpy. Now that we have seen them age and grow over the course of three movies, Richard Linklater’s seminal masterwork managed to build upon those previous films while also expanding this long standing relationship even further. It is honest, brutal and sometimes devastating but never fails to leave an impact. Like ‘Sunrise’ and ‘Sunset’, ‘Midnight’ is simply a film about communication and more often than not the breakdown of it. But is the essence of that communication that makes it so intriguing, the authenticity of Hawke and Delpy’s performances combined with the high emotion of its screenplay that makes Linklater’s film so endlessly endearing. 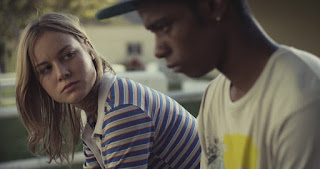 Near the end of ‘Short Term 12’ one of the characters is telling a story that he describes as being “Just like in the fucking movies”, but this is a film that feels too brutally honest to be just like in the movies. While there is an arc and resolution for the characters within ‘Short Term 12’, a film that revolves around a group home for troubled teens, there is no set story within it but that is part of the point. Written and directed by Destin Daniel with such finesse and grace that the brutal emotional moments are only made all the more harrowing. But at the same time there is a glimmer of hope that permeates the entire film, even in its darkest hours. It may not have the answers but it aims to make it through one day at a time, and with a sharp script, exceptional performances from Brie Larson and co, it succeeds in that beautifully. 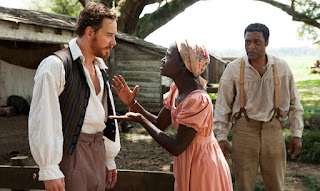 It does sadden me that so many people seem to have convinced themselves that the main reason behind the praise ’12 Years a Slave’ has received boils purely down to politics, because subject matter aside this is still a masterfully made movie. Despite making only three feature films Steve McQueen is easily one of the finest directors working today. It is amazing how McQueen’s direction renders such brutal imagery in such an artistic manner, as if it could convey all the emotion, story and character required without ever whispering a word. But because words are the preferred form of exposition the cast they recruited are all faultless, from Chiwetel Ejiofor’s tragically beautiful lead performance to the many supporting roles from Michael Fassbender, Benedict Cumberbatch, Luptia Nyong’o, Paul Giamatti and Paul Dano. 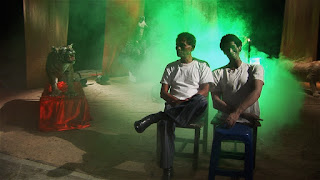 A problem that I sometimes have with documentaries is that of emotional disconnect. They inherently lack the tools that narrative features have so despite being impeccably made they don’t necessarily engage me on an emotional level. That is not the case with Joshua Oppenheimer’s masterpiece ‘The Act of Killing’. Documenting the men who carried out mass murder on behalf of the Indonesian government, the movie acts as a statement on the capacity humans have to normalise anything. The way these men brag about their crimes is not only horrifying, but also so complex on a psychological level which the movie never fails to acknowledge, that is creates a portrait of humane violence that is even more disturbing. It’s an immensely powerful movie, raw, intense and highly provocative. 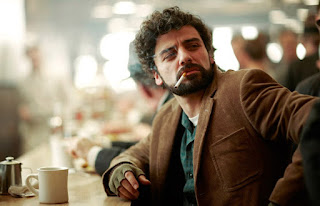 As the Coen Brothers continue their career long exploration of the American dream, they have yet to lose their own unique identity amid the huge range of stories and genres they have covered. Their ability to balance tragedy and comedy is unparalleled and ‘Inside Llewyn Davis’ could be the best example of that they have created so far. Not only is it a fascinating character study but it sheds light on an entire era of our culture that is still being felt today. There is a melancholic feeling to the events but they are fused with such energy and control of craft. In the titular role Oscar Isaac treads a fine line between flawed but still endlessly watchable character whose search for success while maintaining artistic integrity is one that many can relate to, most of all those familiar with the cinema.


2: The Wolf of Wall Street 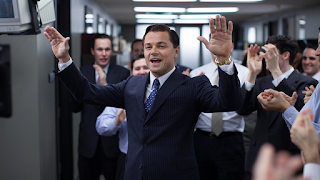 It obviously comes as no surprise that a film directed by Martin Scorsese is pulsating with manic energy, superbly made in every regard and ridiculously entertaining. What comes as surprise though is just how deep the social commentary the story of Jordan Belfort goes. Through pioneering the cinema of excess Scorsese throws the audience straight into the hectic, loathsome world that is Belfort’s embezzling, money laundering life style. Most remarkably of all is how Scorsese ultimately turns the film into a reflection of its audience, forcing us to confront the idea that for all our moral superiority we were more than happy to idolise Belfort and his antics. With a career best performance from Leonardo DiCaprio that chews the scenery to pieces and an ensemble cast that are no less brilliant, Scorsese has created another seminal masterpiece that acts as both a character study and a commentary on all of us. 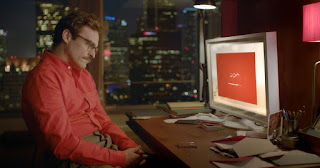 As a genre, science fiction tends to make broad statements about society. But Spike Jonze’s film uses its vision of the future to comment upon our innermost emotions. It is perhaps the most prophetic statement modern cinema has made about the future of humanity, and the layers of unspoken detail that Jonze adds only make that vision more authentic, fully immersing the viewer within is intricately staged world. There are so many unspoken details about the world ‘Her’ creates that demonstrate Jonze’s mastery of visual storytelling. But his screenplay is also a magnificent achievement, conveying its deep themes with nuance and subtlety that never makes them feel overbearing whilst blending in perfectly with the human emotions that drive the story. Joaquin Phoenix gives a performance of such raw intimacy and the cast around him are equally brilliant, particularly Scarlett Johansson whose vocal performance has more depth to it than almost any other performance of 2013. ‘Her’ is a film of great intelligence and ambition, but that is matched by its emotional complexity and endearing empathy.
Posted by Joshua Price at 15:37