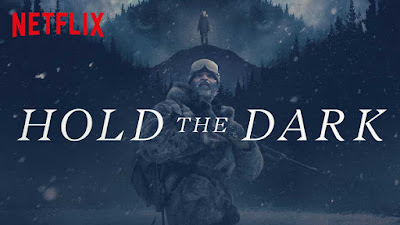 "There are bodies scattered on the hillside."

In just a few small steps Jeremy Saulnier has cemented himself as one of the most promising filmmakers currently at prominence. His two masterful thrillers ‘Blue Ruin’ and ‘Green Room’ each displayed such a ferocious command of craft that they could only have come from a director with an intuitive talent for suspense and tension. They were each tightly wound and electrifying pieces of cinema, however his latest film ‘Hold the Dark’ is instantly notable as being distinctly more ambitious.

Retired naturalist Russell Core (Jeffrey Wright) journeys to the edge of civilization in northern Alaska at the pleading of Medora Slone (RILEY KEOUGH), a young mother whose son was killed by a pack of wolves. As Core attempts to help Medora track down the wolves who took her son, a strange and dangerous relationship develops between the two lonely souls.

There is always a danger to a filmmaker who wants to make a jump in the ambition and scale of their stories. Obviously I am not for a second suggesting that a talented director should be discouraged from broadening their scope (some of the best films in history have come from precisely that), but it is worth noting the risks involved. As disappointing as it is given the strength of Saulnier’s previous efforts, ‘Hold the Dark’ is emblematic of those problems and suffers from having too far a reach with not enough substance to justify it.

On its most basic and fundamental level ‘Hold the Dark’ is clearly an increase in size from the likes of ‘Green Room’ and ‘Blue Ruin’. Where the two prior films both fell within a similar 90-95 minute runtime, ‘Hold the Dark’ ploughs on to 125 minutes, a length that it fails to fill satisfyingly. The plot meanders to a point where key narrative arcs feel confused and muddled, whilst the overall structure of the film seems awkwardly paced. ‘Hold the Dark’ is a movie that feels much longer than its runtime while simultaneously being strangely empty and devoid of substance.

Perhaps that feeling arises from how little of the narrative within ‘Hold the Dark’ unfolds in unison. Rather than deliver a series of plot threads and narrative arcs that flow into one another and unfold at a simultaneous pace, the script is constantly at odds with itself in regards to where to devote its attention. When it has to advance one theme or story beat, everything else is halted to accommodate it, which creates this sense of stalling that drags on the film not only in terms of pacing but also simple cohesion. When you boil the core elements of ‘Hold the Dark’ down it becomes apparent how needlessly convoluted the film is as a viewing experience. Too much muddled storytelling means Saulnier’s latest film is about as far away from a tightly wound thriller as one can get. It’s difficult to be absorbed in the momentary suspense when part of you is still wrapping your head around the broader story beats which refuse to add up. 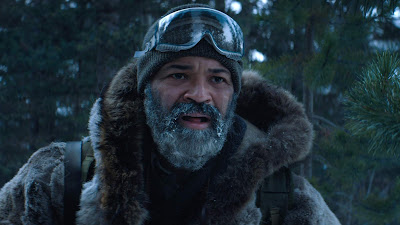 However Saulnier is too talented to produce an outright disaster, which ‘Hold the Dark’ is most certainly not. Though its own ambition may be its downfall, it is hard not to admire the scale from which Saulnier aims to deliver a story which is somewhat compelling when the narrative beats fall into synch. Though its philosophical undertones also lack enough development to feel impactful, few filmmakers are better at eliciting an instinctive gut reaction from a viewer as Saulnier. The brutality on display here is deeply felt, as are the emotionally draining performances from a hugely talented cast.

Having worked as a director of photography years before helming his own films, Saulnier still possesses a keen eye for evocative visuals and dramatic angles as well. The cold and hostile Alaskan environment is a truly chilling setting for a thriller of this nature and helps to create a highly atmospheric work. It’s easy to think of the environment as a fully formed character in of itself. In fact when you think of ‘Hold the Dark’ as strictly a mood piece the film almost works.

However that reading soon falls apart when the film’s story beats demand the characters be seen as complex presences, which the script never quite establishes adequately. Once again the flaws of the movie rests on its failure to justify its own scope and scale. If this were a shortened thriller the lack of character depth could be forgiven, but in a two hour tour of bleakness a continuous mood and pretty visuals are not enough to sustain a compelling narrative for that amount of time. Saulnier can convey dread and despair with brilliant impact, but for a feature of this ambition on this occasion he lacks the emotional depth and nuance to reach a more meaningful conclusion.

Despite some strong elements, ‘Hold the Dark’ is too cold and distant to work as a compelling thriller in its own right.