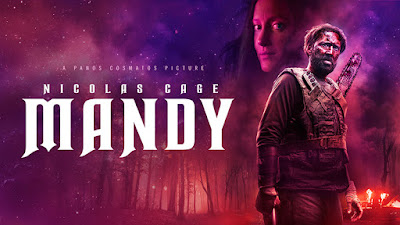 "It glowed from within, strange and eternal."

I’m not sure exactly what the wider perception of Nicholas Cage is in the film going consciousness right now. Hopefully we have long moves past perceiving Cage as nothing more than an over the top internet joke because quite frankly Cage has always been too bold and too daring to be labelled as a bad actor. Though some of his energy is misguided at times you can’t deny the raw power Cage puts into his work and when the material suits his specific style of performance the results are phenomenal.

In the Pacific Northwest in 1983, outsiders Red Miller (Nicholas Cage) and Mandy Bloom (Andrea Riseborough) lead a loving and peaceful existence. When their pine-scented haven is savagely destroyed by a cult led by the sadistic Jeremiah Sand, Red is catapulted into a psychedelic and blood soaked journey to seek revenge against those who wronged him.

When you take a look back and examine Cage’s career as a whole, it is staggering how many outright great films/performances he has given. From his tragic (and Oscar winning) turn in ‘Leaving Las Vegas’ to the impeccable comedic timing he displayed in ‘Raising Arizona’ as well as his dual performance in ‘Adaptation’, Cage has worked with some of the best and most distinctive voices in recent cinema history such as Martin Scorsese, Werner Herzog and David Lynch.

I say all of this because ‘Mandy’ is not the midnight madness Cage movie it is being sold as. It features all the splattering, blood soaked, neon lit absurdity one would expect, but uses those elements to tell a deeply atmospheric and emotionally powerful story. There are definitely echoes of Panos Cosmatos’ previous film ‘Beyond the Black Rainbow’ to be found within ‘Mandy’. They are both decidedly melancholic in precisely what they are presenting.

That being said whereas ‘Beyond the Black Rainbow’ was a hypnotically dense to a point where it’s mournful themes felt in line with the film’s slow pace, ‘Mandy’ is arguably more subversively brilliant in how it blends these weighty thematic undercurrents with the outright insanity of its story. If you were to describe the plot of the film on paper it would appear to resemble any throwaway midnight movie, with chainsaw duels, drug fuelled cannibals and of course Nick Cage on a bloodthirsty rampage. The emotional weight is conveyed entirely through tone and execution.

‘Mandy’ doesn’t seem to indulge any of these action set pieces, or at least not in a righteous sense. As Cage murders his way to his goal of revenge there’s no cathartic drive or triumphant stance. Instead there are just echoes of sadness and loss the film argues can never be truly resolved. The emotional output ‘Mandy’ aims for is played with complete seriousness and feels utterly convincing as it plays out. The last moments in particular amount to haunting gut punch that unifies the insanity of what has transpired with the emotionally grounded reasoning of what motivated it. 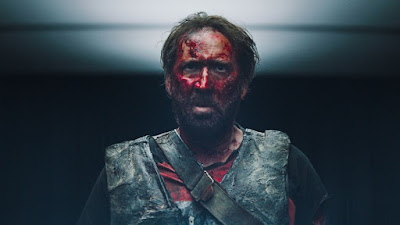 Even Cage’s central performance follows the same pattern. Despite the rage, craziness and raw intensity Cosmatos puts this to use in a way that few filmmakers have. When Cage does descend into deranged fits of anger we see it play out in full through its awkward stages of regression and resurgence for an almost uncomfortable amount of time. Cosmatos’ framing of Cage doesn’t just let you witness his anger, but it also basks in the inner pain being conveyed by his performance. It’s a startling level of emotional range that for all its expressionistic gestures, reveals itself to be pitifully nuanced in how it communicates such a long lasting and deep seated anguish.

In fact so much of ‘Mandy’ is nuanced that I fear some of the film’s best displays of craft might go unnoticed behind the anarchy. So much of the characterisation within the film is presented through background details, with many characters hardly speaking at all which in turn says more than dialogue ever could. In fact Cosmatos’ whole approach seems measured and nuanced in a way that a movie which features Nicholas Cage swinging a battle axe would not lead you to believe.

The Italian-Canadian clearly has a preference to execute his vision in a slow and steady form. In ‘Mandy’ the camera rarely moves with great speed, as it pans and zooms in such a measured pace that you might go ages without noticing it. His build up throughout the first act is also meticulously paced as the audience soak in the atmosphere he gradually establishes. Even the action itself is not bombastic or rapid but rather patient and brutal. Cosmatos stares long and hard at the violence on screen as it unfolds, because his world is one where death and pain do not come quickly.

‘Mandy’ is the blood stained exercise in insanity one would expect, but beneath that lies a surprising level of nuance and emotional depth.