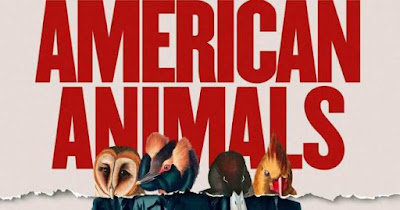 "I don't want you waking up years from now and wondering what could have happened, or what you could have been."

The further we go into 2018 the more it becomes obvious that this year’s Sundance Film Festival was exceptionally strong. Having given platforms to great talents making their first foray into directing like Boots Riley’s ‘Sorry to Bother You’, Ari Aster’s ‘Hereditary’, Jenifer Fox’s ‘The Tale’ and Bo Burnham’s ‘Eighth Grade’, (very likely to be more as well which have yet to see) all of which have made a significant mark on the indie scene and even reached into the mainstream consciousness in some small way. You can add another entry to that list in the form of Bart Layton’s ‘American Animals.

In 2004 Spencer Reinhard’s (Barry Keoghan) interest is peaked by a valuable collection of books held in the library within Transylvania University which he attends. As he and his friend Warren Lipka (Evan Peters) jokingly flaunt the idea of stealing them, they soon find their hypothetical plan shaping into a reality. Along with two other collaborators they partake in one of the strangest and most paradoxical heists in recent American history.

There are so many points within ‘American Animals’ where director Bart Layton could have fallen into the trap of letting his storytelling devices compensate for a lack of substance. It could have strayed into an area which would feel more like a gimmick than a motivated choice. But consistently and repeatedly Layton bestows his film with added gravitas and emotional depth that make the stylistic tendencies all the more involving. ‘American Animals’ is a fresh take on the heist film that worships the conventions of the genre just as much as it flies in the face of established rules.

So much within ‘American Animals’ rests on blurring the lines between truth and fiction, not just stylistically but thematically as well. For the first half of the film its subjects toy with the idea of a heist as a means to invigorate their lives, playing with it and planning it from purely a fictional standpoint. The second half of the film then slowly lures the audience and the characters into an awareness that the reality of the situation is inescapable. Moments that other heist movies breeze past are treated as major obstacles in ‘American Animals’ because in reality that is exactly what they are. 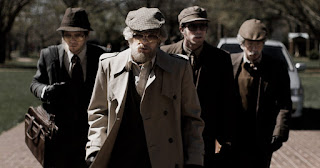 Layton’s visual language is so dynamic and engaging that it circumnavigates the fact that the film essentially gives away the broader outcome of the heist from the start. Though there are still plenty of details and nuances that remain hidden, ‘American Animals’ gives you an indication of where it’s characters will inevitably end up. Ultimately that works in the story’s favour in terms of gravitas. Watching the heist through its stages elicits a sense of dread as the audience become more aware of just how the plan will unfold. So rather than come across as predictable, Layton’s directorial devices draw the viewer deeper into the momentary action while his storytelling choices make the film more thematically fulfilling.

‘American Animals’ does not truly give an explanation to the actions or motivations of its characters on any specific level, which can be somewhat unsatisfying for those looking for clear depth but once again this irregularity within its storytelling works in the film’s favour. It cannot explain the motivations of the characters because ultimately they themselves don’t even know. They have a broad sense of emptiness in their lives and a need to accomplish something by any costs. Which the film both sympathises with and condemns. There are many wide and empty shots that frame these young men as individuals desperately seeking purpose, which is effective in its own right. But at the same time Layton fills his film with heavy and haunting moments that allow the true damage of what these people are partaking in to really hit home for them and the viewer.

Transitioning from an unassuming university student to a group of criminals is a substantial jump, and it would be easy to make it appear jarring if done without nuance and conviction. But the impressive cast of ‘American Animals’ lead with perfect trepidation. Peters and Keoghan move forward from scene to scene with a great sense of placement in the broader story, communicating the very gradual development that their characters make from playfully hypothesising a robbery to carrying it out in its full extent. Much like the screenplay they reconcile the conflicting attitudes an audience will feel towards the main characters, showcasing some signs of empathy and moving slowly towards condemnation. By the time the third act of ‘American Animals’ is in motion the characters are both in way over their heads but also tragic figures of their own making. It’s a balance that is difficult to convey with clarity but the young cast do so excellently.

Slick and stylish at times but heavy and horrifying at others, ‘American Animals’ is a brilliantly original take on the heist movie formula.