Peter Berg and Mark Walberg currently stand at four collaborative efforts, with ‘Mile 22’ following the actor/director combination that brought us ‘Lone Survivor’, ‘Deepwater Horizon’ and ‘Patriot’s Day’. While these films were all serviceable I’d argue none of that is essential to either Berg or Walberg’s involvement. They fill their roles and move the product along but neither one of them seemed to elevate their material which in itself was also perfectly average. It will be interesting to see them paired with a script of genuine brilliance, or as well as one of true awfulness.

CIA operative James Silva (Mark Walberg) leads a small but lethal paramilitary team on an urgent and dangerous mission. They must transport a foreign intelligence asset from an American embassy in Southeast Asia to an airfield for extraction, a distance of 22 miles. Silva and the soldiers soon find themselves in a race against time as the city's military, police and street gangs close in to reclaim the asset.

It is somewhat paradoxical that ‘Mile 22’ manages to be the lesser of all the Berg/Walberg collaborations we have seen so far but simultaneously has by far the most going on within its narrative. There are many surprisingly intriguing turns which both the plot and characters take that showcase a fair amount of ambitious storytelling. But that also works to its detriment as the film hardly feels like a cohesive whole. There are any number of narrative beats that undercut one another, character traits that are completely inconsistent throughout the film as well as a general tone settles on what it wants to be.

Those conflicting qualities are perhaps best exemplified by the protagonist portrayed by Walberg. With a charismatic screen presence I was initially surprised to see Walberg portraying a character introduced as carrying some social awkwardness. It’s an interesting angle that I would be intrigued to see the actor explore to some degree. However the film contradicts this characterisation in how Walberg’s character almost always takes centre stage in each scene, controls every room effortlessly and talks almost non-stop throughout the film. It’s especially confusing given that the character’s apparent awkwardness is tied into his development across the film and yet nothing about him showcases the qualities which script keeps insisting he inhabits.

More so than Walberg I would the real star of ‘Mile 22’ is Iko Uwais. Famed for his visceral martial artistry in ‘The Raid’ films, Uwais is a master at conveying an emotional output through pure physicality. His movement within the action sequences is electrifying to watch and frankly stands head and shoulders above the choreography of anyone else within the film. So many of the action scenes are staged in a static manner but with Uwais the punches and kicks possess a kinetic rhythm to them. 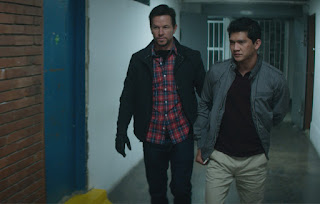 It is a shame that even these moments can’t be enjoyed to their full extent due to some horrendously misguided editing choices. The editing never conveys a clear sense of movement within the action and none of the cuts feel even remotely motivated. Instead we watch a sequence of events that have been edited seemingly at random, with each shot featuring a painful overreliance on shaky cam. ‘Mile 22’ does not showcase action as much as it just approximates it. There’s a vague understanding of where each character is and how the action is developing, at best. At worst it is complete and utter chaos.

That being said, if the editing served to make the action unreadable then the films structure might be an even more severe flaw on that front. The movie flips back and forth on its choice of framework for the story, sometimes conveying it through a set of flashbacks literally being narrated over by Walberg as he explains the plot to the audience. But there is almost no indicator of where and how these framing devices come into play, so Walberg’s narration can be jarring and break what little momentum the action had already. If anything it feels oddly reminiscent of a storytelling device Christopher McQuarrie used earlier this year in ‘Mission: Impossible – Fallout’. But where that method was utilised for a single scene, Berg tries to have multiple scenes play out at length under this guise.

As I said there are fragments of interest within ‘Mile 22’ that could potentially be worthwhile ideas. There are some action set pieces that complement the more enclosed nature of the narrative and have an aura of claustrophobia about them. There are several characters who have degrees of interest in how they are introduced but the movie either fails to follow through on that interest or simply contradicts them. It seems as if half of the ideas within ‘Mile 22’ were worth expanding on, while the other half were better off left on the cutting room floor.

Confusingly structured and poorly executed, ‘Mile 22’ shows some signs of promise but never delivers on its ambition.