"With the right white man we can do anything."

For four decades Spike Lee has been defining the American experience and social environment at each specific point in time through his filmmaking. In the 1980s he shone a spotlight on racial tension with ‘Do the Right Thing’, in the 1990s his biopic ‘Malcolm X’ utilised activism and growth from the past to reflect the films contemporary context. Then he distilled post 9/11 anxiety in the quietly beautiful ‘25th Hour’. Now in the 2010s he brings us ‘BlacKkKlansman’, and it goes saying that Lee has some topics he wants to discuss.

It’s the early 1970s, and Ron Stallworth (John David Washington) is the first African-American detective to serve in the Colorado Springs Police Department. Determined to make a name for himself, Stallworth bravely sets out on a dangerous mission: infiltrate and expose the Ku Klux Klan. Teaming up with a white officer named Flip Zimmerman (Adam Driver), the two detectives descend into a world of prejudice, hate and extremism.

Roger Ebert wrote of Lee that while some have labelled him an angry filmmaker such a description oversimplifies his message, that being said if Lee is angry he has plenty to be angry for. Perhaps it isn’t just anger that punctuates a lot of ‘BlacKKlansman’ but rather more disappointment. The fact that a story about race relations in the 1970s feels so painfully applicable to the world of today is a depressing realisation. Lee wants to note the heroism in the actions of Stallworth, but there’s an underlying sadness to how we seem to have regressed since then.

In case you were unaware this is a heavily political movie, so it would be somewhat insulting to pretend that there is any way to review it outside of politics. Lee’s intent is clear and obvious, drawing direct parallels to present day America. The last few minutes of ‘BlacKklansman’ are a gut punch that adds greater context and meaning to the story that preceded them. It’s emotionally provocative and powerfully direct. Spike Lee has indeed made another decade defining masterpiece, but saying that a story like this will define the 2010s is a hard pill to swallow.

Ironically, for a film that has so many heavy social themes, ‘BlacKkKlansman’ sees Lee at his most free spirited and playful. Despite the underlying darkness, Lee approaches Stallwprth’s story with the finesse of a crime caper, carrying comedic undertones you would expect to see from the likes of Tarantino or the Coen Brothers. For a Spike Lee film it’s incredibly accessible, often striking a delicate balance between humour and discomfort. The inherent absurdity behind this true story is never lost on Lee and his filmmaking is often keen to highlight that.

I’m finding it difficult to even discuss ‘BlacKklansman’ in anything other than a broader sense because in many ways it embodies Lee’s career as a whole to this point. Having often reconciled his activist sensibilities with his clear affinity for classic Hollywood storytelling, it’s Lee’s ability to render these complex issues as accessible stories that has made his statements within each effort feel so bold. The directness of Lee’s statement strikes a heavy contrast to the  immersive portrait he crafts. His visual language in ‘BlacKKlansman’ regularly follows a trait of framing the characters in tight close ups only to then cut to a wider angle. It’s as if Lee draws the viewer into the story where he delivers the ugly prejudice with a wry comedic wit, only to then take a step back and in doing so asks the viewer to do the same where the true horror hits you. It’s an effective one-two punch that the film evokes numerous times. 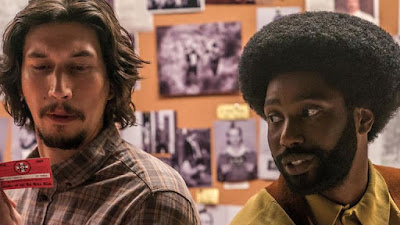 But having talked so much about themes it’s important to remember that ‘BlacKkKlansman’ is quite simply an electrifying piece of filmmaking. The dialogue is crisp and sharp, the story jumps from moments of dark comedy to nail biting tension without ever carrying a tonal disconnect. The film balances its comedic wit, involving tension, heavy themes and empathic characterisations in a terrifically paced and thoroughly entertaining package. It manages to interweave a series of conversational set pieces that clearly act as a means for Lee to deliver his statement and topics but these scenes never feel heavy handed or manipulative. They are just as engaging as the film’s central plot.

Part of that engagement comes from a number of excellent performances. As the son of Denzel I can’t even fathom how much expectation was laid upon John David Washington but he carries the same spark of charisma as his father (and praise can’t really come come much higher than that). Washington has a youthful energy to his performance that constantly reinforces his drive and determination to make a difference. Simultaneously though this energy often transforms into a quiet gravitas as the wider context of what Stallworth’s case says about America as a whole.

Then there is Adam Driver who further cements himself as one of the most gifted actors in today’s filmic landscape. Unlike Stallworth, Zimmerman has a greater sense of development in how he begins to reconnect with his Jewish heritage upon seeing unrestrained anti-Semitism up close and just as his partner struggles to separate the professional from the persona, so does he. Driver conveys every step of that arc with absolute perfection, saying in a single gesture what actors would struggle to do in a paragraph of speech. As well as that, everything about Topher Grace’s turn as David Duke, from the execution to just the mere notion of casting such an unlikely choice for the role, is absolute genius.

‘BlacKkKlansman’ is provocative and direct in a way that few films dare to be, as well as hugely entertaining and engaging.