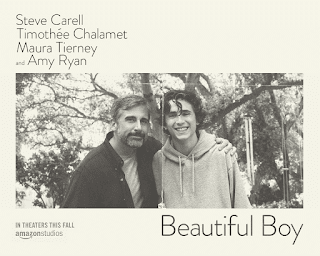 "There are moments that I look at him, this kid that I raised who I thought I knew inside and out, and I wonder who he is."

I tend to find there is a level of comfort certain audiences are willing to accept when it comes to hard hitting drama. Filmmakers can explore topics up to a certain point, but when it comes to some of the ugliest subjects they try to reel back or gloss the picture in some way so as to avoid crossing a line that will risk making an audience too uncomfortable. It’s an issue I often have with many prestige dramas, films that are committed to exploiting the emotional resonance of a story without delving into the harsher reality within the subject.

Writer David Sheff (Steve Carell) is shocked to discover that his teenage son Nicholas (Tomithee Chalamet) has gone missing. Upon finding him, Nicholas shows obvious signs of drug use which rapidly becomes a severe addiction. As his condition worsens Nicholas leans on his father for support in a long and tumultuous battle to overcome his addiction and resume his life.

When it comes to its broad structure and pace, there is a lot to suggest that ‘Beautiful Boy’ might be more attentive to the difficult reality of its subject. Its narrative is littered with recoveries and relapses as David tries to pull his son away from his debilitating addiction only to be unstuck time and time again. There are crushing moments when any hope both the audience and the characters had is wrenched away and even those closest to Nicholas question whether there is anything they can do in the face of his terrible affliction.

It’s a devastating watch, or at least it should be. While the story beats of the film suggest a gruelling and emotionally draining experience, I found myself falling short of that response through the subtleties of the films execution that seemed frustratingly at odds with its bleak and cyclical tone. Overbearing editing that seems insistent in stressing the horror of the situation when that very emphasis feels unnecessary.  There are also music choices that conform to the same conventions any standard drama would, coming across as manipulative and melodramatic as if the film lacked confidence in the conviction of its own emotional power.

In short it is a classic example that less can ultimately be more. There are scenes which feel promising in their resonance only to be interrupted by needlessly manipulative tools that placed a barrier between the subject and how the film chose to represent it. Rather than enhancing the emotional weight of the scenes these aesthetic choices lessen it, adding a sense of melodrama to a story that was already plenty dramatic enough.

This is especially frustrating when Chalamet and Carell already do much of the heavy lifting with the strength of their performances. Their dynamic on screen are consistent enough so that when Nicholas and David’s usual patterns of interacting with one another is broken, that alone conveys a sign of trouble and elicits an emotional response. Their bond is a driving force of the movie, how they communicate and relate to one another serves as a dramatic crux which provides a narrative to Nicholas’ addiction. 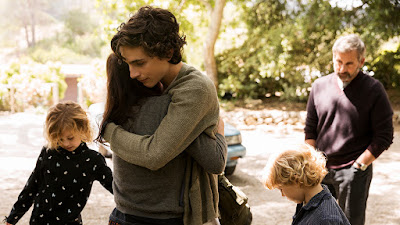 When looked at separately, Carell is definitely evocative as the stable presence in the story. His need to support his son without judgement is one that makes the character effectively endearing, as Carell portrays the confidence David has in his son to rise above his current condition with brilliant steadfastness. There’s such conviction in this part of his performance that when David’s confidence does waver and he begins to lose hope, an aspect Carell also conveys excellently, you feel the full weight of his emotional strain.

Meanwhile, Chalamet has the more tumultuous role as Nicholas. It’s a performance that requires Chalamet to convey the sense of promise and hope just as powerfully as that of despair and depression so as to make the characters constant cycle of recovery and relapse all the more powerful. To sell this with such heft time and time again as Chalamet does is an impressive feat, but what elevates it further is the young actor’s ability to never repeat his emotional output. Each time Nicholas relapses it does not feel repetitive due to the nuance with which Chalamet portrays these falls, each instance takes note of the passing time and ways in which the character has developed rather than simply expressing anguish without purpose.

As I said however, it makes it all the more frustrating that the intricacies of ‘Beautiful Boy’ cannot live up to the broader strength within it. The screenplay’s narrative tool of flashing forwards and backwards is effective at portraying the length of Nicholas’ addiction and the enduring impact it has on those around him, however it also makes for confusing and awkward story beats that don’t leave any room to explore the context around Nicholas and David’s struggles. All of this is to say nothing of how it wastes the women within the story, often reducing David’s current and ex-wife to interchangeable props that exist to relay a specific moral argument to him. They do not come across as fully formed characters so as the movie progresses without bestowing them with any depth, it becomes more and more difficult to remain endeared.

Even the screenplay’s strongest aspects soon begin to suffer as a result of this. What began as a film that defied convention and portrayed addiction as a complex and recurring trial, builds towards a standard climactic end point that while not inherently flawed just feels so at odds with what ‘Beautiful Boy’ established itself as.

Despite two highly commendable performances, ‘Beautiful Boy’ lacks the conviction and the nuance in its own dramatic power to transcend its narrative conventions.