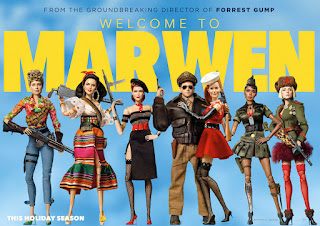 "I was a hell of a good artist, and now I can barely write my name. So my dolls have to tell the story."

For the best part of two decades now, Robert Zemeckis has been experimenting with new forms of filmmaking in an effort to blend the possibilities of CGI with the classical storytelling that defined his earlier works. It’s an admirable approach but one that has yielded few results, with many of his animated ventures both critically and commercially whilst his live action efforts failed to capitalise on their potential. With each new film though I retain some sense of hope that maybe this will be Zemeckis’ return to form.

When a violent hate crime leaves Navy veteran Mark Hogancamp’s (Steve Carell) life utterly devastated, leaving him with serious damage to his motor functions, severe post-traumatic stress as well as brain damage that results in him possessing little memory of his own life. Unable to afford therapy, he starts crafting a miniature and meticulous city and populates it with his own WW2 era adventure fantasies, a project that soon becomes a new outpouring or art for him.

‘Welcome to Marwen’ is partially based on a documentary depicting Hogancamp’s extraordinary life and work named ‘Marwencol’. It’s actually the second instance of Zemeckis adapting works of documentary film into narrative dramas, as he took it upon himself to turn the 2008 documentary ‘Man on Wire’ into a dramatized account via the 2015 film ‘The Walk’. While Zemeckis’ restaging was admirable and featured some impressive set pieces (most notably the climactic twin towers high wire walk), it still lacked the lyrical beauty or emotional resonance of the documentary. The same could be said of ‘Welcome to Marwen’ which seems to display an almost uncanny ability to misjudge its subject matter and fail to reconcile what made the true story so impactful.

Hogancamp’s artwork and the presentation of it in ‘Marwencol’ was not reduced to a simplistic, uplifting narrative. It was a violent, dark and sometimes uncomfortable view of someone living a life vicariously through their staging of their own fantasies, tinged with all the sexuality and adrenaline as human desires can be. The fact that the scenes were reflections of Hogancamp’s own life and traumas made it all the more striking. The surface level fact of these scenes being staged with dolls suggests a quirky or whimsical tone but in actuality is angry and complex.

Taking all of this into account it becomes all the more baffling that the screenplay for ‘Welcome to Marwen’ tries to approach its subject in this stagnated tone. As much as the screenplay wants to stress the importance of Mark’s recovery, it frames his work as an eccentric quirk rather than the very real means of recovery that it actually was. Even putting the real story aside though there is such a severe case of cognitive dissonance throughout the film that it reaches levels that verge on uncomfortable. This simplistic and melodramatic approach seems to out of synch with the horrendous violence that instigates these events that they risk undermining the dramatic tone the movie aspires for. 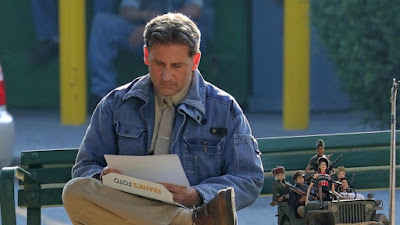 There is a similar level of awkwardness regarding Carell’s performance. It’s Carell’s sincerity that usually works to further both his comedic and dramatic roles, but in ‘Welcome to Marwen’ he seems lost as to when and where to apply that sincerity. I don’t doubt the screenplay hardly made this task any easier but Carell’s performance does little to suggest someone grappling with their own trauma as much as it is a drastically sliding scale of tones. There is no connective tissue between the two versions of Hogancamp he is portraying, the victim of a violent attack and the eccentric artist taking photographs of dolls.

The film’s narrative is split between Mark’s attempts to navigate the real world and his own stories that play out in his constructed miniature world. It’s a method that in this case either feels needlessly heavy handed or frustratingly shallow. In some cases it stresses the fact that Mark’s dolls reflect people within his own life to such an extent that it actively impedes the central story, but at the same time it never devotes any substantial time to those characters in the real world for their Marwen counterpart to carry meaning. It sacrifices worthwhile drama for over the top action sequences which do little to further the central themes the film seems to be aiming for.

Whether those animated sequences even work at all on their most basic functionality is also up for dispute as they venture deep into the uncanny valley effect. Though this is a highly subjective topic, it seems to me personally that the CGI does not possess the fluidity or dexterity needed to appear natural. In fact realism does not even need to be the goal, a simple sense of consistency to the way the figures moved would be convincing enough. However as I stared at Steve Carell’s face composited onto a stilted CGI figurine I couldn’t help but fail to be immersed within the story of Marwen. When all is said and done though, any issues I had with the animation was simply the tip of the iceberg for an unbalanced and poorly conceived approach to this story.

‘Welcome to Marwen’ is a tonally unbalanced and emotionally empty experience that waters down its subject whilst adding needless, self-indulgent flourishes.