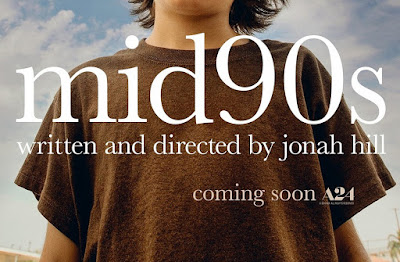 "A lot of the time, you feel that our lives are the worst. But if you look in anyone else's closest, you wouldn't trade your shit for their shit."

I feel as I’ve spoken several times over the past few years about first time directors and their tendency to resort to coming of age films as their feature debut. On the surface one could assume that is simply so they can pull from their own life experiences but that does not necessarily have to be accurate. More than any specific story a coming of age film can represent a feeling, a need of urgency or the burgeoning experiences from its subjects. It can also be about a specific era, an environment one might not have been a part of but still shaped them in some way.

In mid-1990s Los Angeles, 13 year old Stevie (Sunny Suljic) lives with his aggressive older brother (Lucas Hedges) with whom he is constantly fighting against, and his mother (Katherine Waterston) who tries to broker peace between the two siblings. Stevie soon falls in with a group of skateboarders and joins them as they roam through the city day after day, looking for meaning or simply something to pass the time.

Jonah Hill has certainly crafted a promising introduction here, regarding both the opening shots of ‘Mid90s’ specifically and the broader potential his career may have. This is a film which possesses a strong level of craftsmanship and clear intent, with its greatest feat of visual storytelling coming in the first scene. Without even a single piece of text to inform us, Hill instantly transports the audience to the heart of the mid-90s with a simple layout of a teenager’s bedroom. His meticulously framed shots that mix in pop culture iconography, stylistic flourishes and general aesthetic choices all convey such a distinct sense of time that the film succeeds in immersing you within its environment in the opening moments.

While as a whole ‘Mid90s’ never quite lives up to the brilliance of those early moments, there are still plenty of brilliant touches throughout the movie. Some of its imagery is almost poetic in its beauty, the performances feel wonderfully authentic and Hill’s ground level view of the subject yields some profound observation on this small stakes narrative. Ironically ‘Mid90s’ suffers from being too middling, stuck awkwardly between a more minimalistic view of proceedings only to then hint at a broader view that it never really follows through on.

It’s especially frustrating for a film in which the main thematic crux is the perspective one’s own life has when contrasted with others. While much of the focus is on the protagonist, as the movie progresses it shifts more to the supporting characters and alludes to their own struggles. But rather than give exposition on the other characters in a way that feels natural to the narrative, the film just outright states each characters backstory in a single moment. Though I can understand it serves as a rare moment of openness for these teenagers, it also feels clunky and somewhat forced. It builds to a relatively contrived third act conflict that ultimately does not add much meaningful substance to the movie.

So somewhere between this minimalist story of teenage layabout in LA and this deep drama regarding young and conflicted lives is ‘Mid90s’. In a dissonance that affects the tone and pace of the film as well, switching between scenes that feel lose and free with others that try to set up or resolve a conflict of sorts. It’s the kind of film where a scene of random house party antics with lead into severe emotional warfare, or the kind where a character will break down in tears only for it to never be resolved or referenced again. 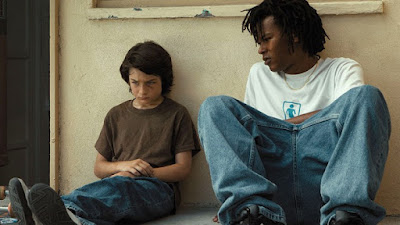 But amidst those teething problems is a film of energy and value. While the dynamic of Stevie’s group is never explored in any great detail, it is instantly conveyed with a sense of great confidence from Hill. His placement of the characters and his attention to the nuances of their interactions is functional enough to tell a story on its own. He is confident enough to let certain character details communicate a story just in their existence. Hill lets their daily exchanges, their dialogue and the places they visits serve as a means to endear you to the group and their routine. Much like Stevie when you become accustomed to their activities and dynamic you feel satisfied at being rooted within this circle of friends.

The group of skaters feel palpably real as a result of the actors as well, with each of the young performers filling in their roles superbly. They handle the chilled conversations and comedic banter with a sense of infectious effortlessness, however it was then a pleasant surprise to see how capably they each handled the more dramatic moments as well. Even if the scenes of high conflict do feel slightly contrived in the broader narrative, the actors in question rarely have a misstep when it comes to conveying how the characters feel in those intense flashes. As much as I complain about the allusions of depth that are never quite fulfilled, it would be interesting to revisit the movie bearing each character’s history in mind and noting how the young actors bared that in mind.

Perhaps Hill titled his film ‘Mid90s’ for the specific reason that above all else it is about a specific time and place. It’s atmospheric and immersive, drawing the audience into its environment and being mostly content to observe the characters within it. The hazy streets of LA shot with an almost dreamlike focus, scored by the iconic and varied sounds of that decade, make for a wonderfully grounded view. I just wish it was more frequently self-reflective than the characters occasionally are.