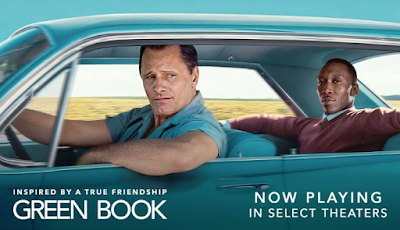 "So if I'm not black enough and if I'm not white enough, then tell me who am I?"

Peter Farrelly’s latest movie does have the connection to his best known work in the sense that they are both road movies. One would think that is where the similarity between ‘Green Book’ and ‘Dumb and Dumber’ ends however there is a narrative catharsis plots involving lengthy road trips and stories of self-discovery, so as absurd as it sounds perhaps Farrelly could benefit from adopting the storytelling methods that endeared us to the likes of Harry and Lloyd, only in this case with a context that allows for far more gravitas.

Dr Don Shirley (Mahershala Ali) is a world-class African-American pianist, who is about to embark on a concert tour in the Deep South in 1962. In need of a driver and protection, Shirley recruits Tony Lip (Viggo Mortensen), a tough-talking bouncer from an Italian-American neighbourhood in the Bronx. Despite their differences, the two men soon develop an unexpected bond while confronting racism and danger in an era of segregation.

At the time of this review it is difficult to review ‘Green Book’ outside of the controversy surrounding the film. From Shirley’s family denouncing it as a work of fiction to what many have viewed as an undeserving awards sweep as well as screenwriter Nick Vallelonga’s, let’s call them, unfortunate comments. It is a shame that such controversy has shadowed a film that I should otherwise be achingly excited for. You would be hard pressed to find two more exciting and committed actors nowadays than Mahershala Ali and Viggo Mortensen and the notion of seeing them on screen together is a tantalising one.

It is safe to say that the chemistry of Ali and Mortensen essentially carries ‘Green Book’ and is far and away the strongest element of the film. They each fully immerse themselves within their respective characters and completely disappear into the roles. Each of them have a unique talent of unfolding the layers of their characters at a gradual rate, slowly easing the audience into their personas so as to make each character revelation feel both surprising and fulfilling. It’s this common approach that allows them to bounce off each other with a brilliantly dynamic sense of energy. In a film where the emotional beats of each scene so often lies on the little interactions between Shirley and Tony, the two actors portraying them never fail to convey the importance of those moments.

Outside of the wider socio-political context that makes certain elements of ‘Green Book’ more problematic (more on that later), structurally the movie flows at a respectable pace. Farrelly does indeed know how to employ a lighter touch that makes his road movies feel well paced. Heavier scenes that literally announce the movie’s intent are spread evenly throughout so as not to weight down any one particular act, while still building towards and emotionally fulfilling climax that is appropriately uplifting and undoubtedly affecting. 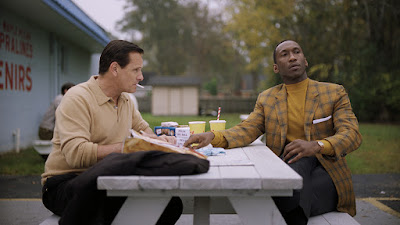 However, it’s when ‘Green Book’ states its thematic conceit that it becomes decidedly more problematic. Part of the main narrative within the film is to draw a comparison between Shirley and Tony, both in terms of their own understanding of one another as well as the prejudice they are both subjected to. At this point you might begin to see an issue. I will not pretend that classicism is not a prevalent issue and undoubtedly impacts many people. But within the context of when ‘Green Book’ is set, to make a comparison between it and the systemic racism experienced by black people living in America is hardly what I would call apt.

While Tony within the film is shown to deal with prejudices regarding his mannerisms and conduct which to him are nothing more than a by-product of his upbringing, even within the context of the movie these pale in contrast to the issues Shirley faces to which they are compared. Perhaps ‘Green Book’ could benefit by remembering the significance of the very thing it is named after. Tony is subjected to sneering while he travels the country, whereas Shirley need a travel guide instructing him on how to find accommodation that doesn’t come with the risk of being subjected to harassment and violence. As well-meaning as this concept of unity between the two is, their circumstance within this era are very much not comparable.

‘Green Book’ could have avoided this if it were to employ a narrow focus on these two men and how they overcome their initial impressions of one another, and to a certain extent it does with the result being the film at its best. But it repeatedly aims to address broader topics and in doing so exposes how naïve and simplistic its conceit actually is. The film only makes these flaws more apparent when it makes a comment on Shirley’s own educated background serving as a barrier between him and the black populace. Of all the ways to make a comment on the state of race relations in the 1960s, the story of a white working class guy teaching a black musician to reconnect with his own culture is not the way to convey that.

‘Green Book’ is uplifting enough but risks oversimplifying its historical setting in favour of a more easily accessible narrative.