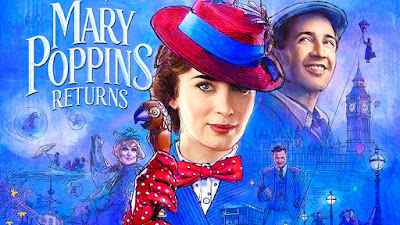 "Nothing's gone forever, only out of place."

For the past few years we’ve become gradually more used to the concept of a legacy oriented sequel. A film being revived decades after its predecessors release and finding popularity in the collective status that property has built up over years to accumulate legions of devoted fans, which makes them all the more inviting as well as all the more terrifying. Potentially a huge market to tap into and entertain, but also a huge base to risk disappointing. When it comes to Disney, this particular revival concerns one of their most widely loved and enduringly popular properties of all.

Now an adult with three children, bank teller Michael Banks (Ben Wishaw) learns that his house will be repossessed in five days unless he can pay back a loan. Just when all seems lost Michael and his sister Jane (Emily Mortimer) find a familiar face from their past revisiting them, their supposedly magical and unorthodox nanny named Mary Poppins (Emily Blunt).

In some ways you could think of ‘Mary Poppins Returns’ as Disney just broadening their horizons, using the same tactics that have served them well in capturing the nostalgic affection of those who grew up watching their animated features of the early 1990s to now reach those who have childhood memories attached to ‘Mary Poppins’. So with 54 years’ worth of collective childhoods behind it there is a lot of weight already behind this sequel. A film that shares a lot of the strengths of its predecessor as well as its weaknesses.

Much like the character herself, ‘Mary Poppins’ is in the unique position of feeling both ageless and completely of its time. It succumbs to many of the conventions of a classical Hollywood musical that would eventually cause the genre to stagnate. It’s musical set pieces function more as convention than necessity, its direction feels inherently stage-like and its plot is somewhat meandering to put it lightly. However it’s complete sincerity, strong thematic through line and more than a few transcendent moments mean it continues to appeal to children as each new generation passes. Whether Rob Marshall’s sequel will endure for 54 years itself is yet to be seen (I’ll come back and edit this when such time has passed) but it goes above and beyond to try and replicate the magic of the original.

It comes as no surprise that Disney would recreate the production design and aesthetics of the original down to the finest detail. But in making a film designed to be a successor to ‘Mary Poppins’ would call Marshall’s weaknesses as a filmmaker become his greatest asset. His musicals have a tendency to feel deliberately staged, as if wanting to immerse the audience in a Broadway performance. While not inherently lesser, it’s a technique that leaves a lot to be desired in terms of the unique power film possesses as a medium, so the end results feel cluttered and awkward. However by adopting this technique once again Marshall has indeed replicated the visual language of the 1964 film. The movement of the camera, timing of the edits and framing of the characters work to create a sequence of images that is unmistakably drawn from the influence of ‘Mary Poppins’. 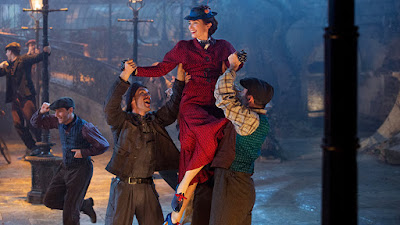 Save for a few modern touches such as CGI and colour correcting, ‘Mary Poppins Returns’ has the palette of a film that could have been made immediately after the first movie. It helps that the film essentially recreates the tone and scenario for each and every one of these sequences, from a beautifully rendered hand drawn animation sequence (which really is astonishing) to a more tactile and stunt based performance orchestrated by London’s working class characters. We are treated to gravity switching antics, sombre and narratively fulfilling number and an uplifting free spirited finale. In fact more than one of the songs overtly references the soundtrack of the original either through sampling or directly lifting a few bars from its music and weaving them into these new numbers.

All of this means that one could obviously accuse ‘Mary Poppins Returns’ of being overly derivative of the original, which is a valid criticism. It makes no effort to re-contextualise or expand upon any element introduced 54 years ago. However, I would also note that you would struggle to argue that the filmmakers ever wanted to achieve anything besides that. Their goal was to recapture the magic that generations have felt when viewing a particular film, either through its aesthetic or just a specific mood and atmosphere.

Which brings me to Emily Blunt’s performance which will no doubt be the talking point among most people in terms of how well she recaptures or reinvents the iconic character Julie Andrews brought to life. In all honesty it feels restrictive to simply reduce both actors to one doing an imitation of the other. Blunt’s performance is so fully realised and impeccable from the smallest of mannerisms to the broadest emotional beats. In fact it was in those minute details that her performance reveals just how remarkable it truly is. It’s obvious just from the bare aesthetics that Blunt has assumed the role excellently, but when the camera truly observes her as she works her magic and we as an audience are left to marvel at the nuances of her expressions and the flourishes in her movements, you simply see her as that character and nothing else. One could almost say her performance is (wait for it) practically perfect in every way.

‘Mary Poppins Returns’ is a charming and faithful tribute to what so many continue to adore about its predecessor, even a little too much for its own good at times.