Now I admit there are probably more detailed rundowns of this story from both parties, and some of you may also disregard this as of course I don’t know either party personally so from one viewpoint it’s hardly my place to comment upon the issue. But at the same time I think that what’s happening here indirectly affects everyone who, like myself, enjoys sharing their opinion on film. Also as someone who doesn’t personally know either party I like to think that what I am writing here offers an impartial judgement of the issue for anyone who wants that outlook.


The full story goes like this, just over a month ago ‘Batman v Superman’ hit theatres and the general critics consensus was that it was less than stellar, sitting at only a 29% approval rating on Rotten Tomatoes. The backlash from the movie’s supporters was gargantuan, it’s tough to find a review from a popular critic online that doesn’t contain a slew of comments defending the movie or attacking said critic. One of the few adamant supporters was YouTube critic Grace Randolph who gave the film a glowing review. Interestingly another supporter of the movie was the former head of Collider Videos, John Campea who said that while the film had significant issues he believed the good outweighed the bad. People who were less supportive included Andy Signore of Screen Junkies and Kristian Harloff, also from Collider Videos, although even Harloff’s review was more mixed than outright negative.


But going back to the fan backlash. As time went on a number of theories sprung up including one that involved Rotten Tomatoes wanting to destroy Warner Bros’ film slate (which soon fell through once people remembered that Rotten Tomatoes are owned by Warner Bros), then there was the theory that Disney were bribing critics to give the film a negative review (which if true would not only bankrupt the studio but also indefinitely destroy their reputation should such a scandal ever reach the public eye). Another theory is that there is an ‘anti-DC agenda’ among movie critics. One of the frontrunners of this particular theory was Grace Randolph who even made a video in which she threw in theories that a lack of press screenings had made critics resentful of the film (even though ‘The Force Awakens’ seemed to get along okay without press screenings), other films, that were in her opinion mediocre, like ‘Mission: Impossible – Ghost Protocol’ had won over critics by sending them to Dubai for the premier (yeah, I’m sure that was the only reason apart from the fabulous action scenes, thrilling plot, good humour, mind-blowing stunts and terrific performances) and that critics were tired of Superhero movies and decided to eliminate DC from the market to give Marvel more room. 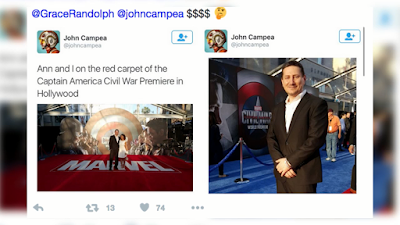 So make of that what you will (if you want to know, I make it as bullshit). Randolph continued to promote this theory, naming various critics who she believed were in on this conspiracy which led to a Twitter feud with Andy Signore and meanwhile John Campea, when asked about the theory (not about Randolph specifically, simply about the supposed ‘anti-DC agenda) dismissed it as idiotic. Now it’s important to emphasise that (by all accounts) Campea has only briefly met Randolph once and beyond that never had any contact with her aside from inviting her to be on a critics panel which she declined. Soon after, Randolph re-tweeted the picture shown at the side. A few images of Campea and his wife at the premier for ‘Captain America: Civil War’, with the caption “$$$$$$”.


It’s debatable whether or not Campea’s comments on the ‘anti-DC agenda’ could be construed addressed directly to Randolph (personally I think it’s a bit of a stretch). But here Randolph re-tweeted, to her hundreds of thousands of followers, a direct insinuation that taking bribes from Marvel. Putting aside the fact that a critic like Campea would be appearing at dozens of premiers regardless, what Randolph is doing here is directly questioning Campea’s integrity and accusing him of being corrupt.


Remember of course, Campea’s review of ‘Batman v Superman’ was actually a positive one, so why Randolph felt the need to accuse him of being bribed by Marvel is beyond me, as well as the fact that in the past he’s been highly critical of ‘Agents of Shield’ and ‘Iron Man 2’ (are Marvel paying him to say that?).


You could also take into account that Campea recently appeared on an episode of the YouTube movie debate series, Movie Fights, this particular episode was titled ‘Batman v Superman: Fun or Failure?’ hosted by none other than Andy Signore. Campea was arguing in favour of ‘Batman v Superman’ once again stating that although the film was flawed he felt that the good outweighed the bad. He went on to win that argument and the episode. So I think it’s safe to say that even if Marvel were paying him, it wasn’t enough. 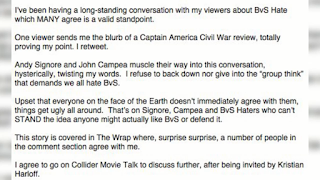 Campea responded by asking Randolph why she had made this accusation and once again re-asserted his views regarding the ‘anti-Dc agenda’ on Twitter. Randolph’s response was this tweet, stating that Campea and Signore has “muscled their way into this conversation, hysterically twisting my words”. Did I miss the part in which Randolph put up pictures of Campea to accuse him of being corrupt? If anything it was Randolph that muscled him into this conversation. Frankly, it’s pathetic and laughable. She went on to state that she refused “to back down”, again having only come into contact with Campea once, and that she refuses to “give into the ‘group think’” as well as stating that “Signore, Campea and BvS haters who can’t STAND the idea that anyone might actually like BvS or defend it”. I’ve already stated it dozens of times in this post, but yet again I need to clarify that Campea liked the movie he’s being accused of demanding everyone hate and as for Signore, as well as the episode of Movie Fights he also hosted a live debate in which fans of the film were allowed to call in and argue in favour of the movie.


To top it all off Randolph called ‘Batman v Superman’ “’The Shining’ of superhero movies’. I’m not entirely sure what that’s supposed to mean because I’ve never heard anything referred to as ‘The Shining’ of anything. I’ve heard films referred to as “The ‘Citizen Kane’ of…..” as a term for a movie excelling within its field of revolutionising it, but not “’The Shining’ of….”. Maybe she’s trying to say it’s hated now but will be appreciated later, but even if that does come true it doesn’t really justify her theory of an ‘anti-DC agenda’, the improved consensus of ‘The Shining’ came about due to the increased study and analysis of the film as well as audiences getting over the initial disappointment of how unfaithful it was to Stephen King’s original novel, not because they had all been bribed by… William Freidkin…Wes Craven…John Carpenter…or any other successful horror director of that era that was determined to keep their position as the best, I guess?


Or maybe it comes down to a statement Randoplh made in her initial review of ‘Batman v Superman’ where she stated that Zack Snyder was on the same level as Stanley Kubrick? You read that correctly, apparently Zack Snyder is this generation’s equivalent Stanley Kubrick (whom I regard as the greatest director of all time). I think even the most loyal supporters of ‘Batman v Superman’ were surprised by that. Maybe it came from a personal fandom to the property as opposed to complete ignorance over what makes a good film, but even then it’s not much of an excuse. For example, I’m a huge fan of ‘Firefly’ and will praise that series endlessly. But despite my personal love for the show, to say that ‘Firefly’ or anything that Joss Whedon has done in any medium is anywhere near the level of artistry that Stanley Kubrick is a travesty for me.


Just when you thought all was done and dusted, a recent episode of ‘Collider Movie Talk’ was uploaded to YouTube, hosted by Kristian Harloff. Harloff had invited Randolph onto the show prior to this with the intention of getting her point of view of the issue, but over the course of the show he stated that he regarded the opinion of the ‘anti-DC agenda’ and cases of Disney bribery (never name dropping Randolph specifically, just the theory as a whole) as “shameful”. Once again Randolph launched into a series of attacks, immediately declined her invitation and began another twitter feud, that seems to be continuing right now.


There are a number of points to take away from this. The first is that this is not just a matter of agreeing or disagreeing over a movie anymore. Randolph openly attacked the integrity of critics that disliked ‘Batman v Superman’, she isn’t challenging their opinion or views she is simply defiling their professionalism and as I said at the start, such an attack is applied to everyone who expressed an opinion about that film, including me. She accuses us of throwing away our integrity and bowing down to corruption by inciting that we accept pay checks from Marvel (still haven’t got mine in case you’re wondering).


She’s also displayed a complete lack of common sense and insight. She has spent the best part of a week accusing a critic of being biased towards ‘Batman v Superman’ and being corrupt and dishonest in his profession, despite the fact that he has gone on record several times to say that he liked the film. A quick bit of research can highlight all of this, literally anyone with a bit of intuition should have been able to work this out. It may also be interesting to note that Randolph used to work for Marvel until she was fired, so if anyone went into this movie with an agenda that would ultimately affect their opinion it was her.


Once again, differing opinions are fine, there are few things better than being involved in an evoking and engaging argument over a film, trying to convince someone why you hold a certain opinion but also taking into account their own views. However Randolph proved here that she was not simply expressing an opinion. In fact, based on this whole story we can assume that her opinion was so insecure that she has to find an ulterior motive for anyone disagreeing. She seems to think that her opinion is so right that she has to conjure alternative reasons for anyone holding a different opinion, either that critics are corrupt or have an ‘anti-DC agenda’.


I disagree with a lot of people over movies. I have a friend who likes ‘I am Legend’ but I don’t accuse them of being bribed by Will Smith, another friend of mine dislikes ‘Jaws’ (apparently such a person does exist) but again I won’t insult their intelligence by accusing them of having an ‘anti-Spielberg agenda’ and those are just a few examples. The point is not everyone will agree on everything but to falsely question the integrity of another professional, against all logical evidence, simply for the sake of proving yourself right is a new kind of low.


But what are your thoughts?
Posted by Joshua Price at 15:38