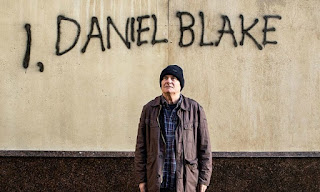 "When you lose your self respect, you're done for."

Few directors have been able to merge personal and political filmmaking like Ken Loach has over his long and illustrious career. Having made five decades worth of socially progressive dramas with widely acclaimed masterworks like ‘Kes’, ‘Family Life’ and ‘The Wind that Shakes the Barley’ being among them’ you may think that having come out of retirement to make this latest feature he would be less outlandish and more reflective. But you would be wrong.


A widowed joiner named Daniel Blake (Dave Johns) finds himself stuck in Newcastle’s benefits bureaucracy as his declining health means he can no longer take a job nor claim a Jobseekers’ Allowance. As he struggles to maintain his dignity and welfare, he befriends a single mother Katie (Hayley Squires).


Earlier this year ‘I, Daniel Blake’ was entered into the main competition at the Cannes Film Festival, and up against the titans of world cinema like Park Chan-wook, Jim Jarmusch and Nicholas Winding Refn, it was Loach’s film that walked away with the festivals top prize, the prestigious Palm d’Or. Like many of Loach’s films it forces the audience to observe the more mundane struggles of everyday life. It lands in a category of social realism that more and more modern movies seem to overlook today, where by placing the narrative within the context of more real world issues it ultimately leaves a more lasting impact.


Despite its brilliance ‘I, Daniel Blake’ certainly can’t be called an enjoyable film, however it is undoubtedly an important one. It is both a criticism of the modern bureaucracy that reduces human lives to numbers but also a celebration of the kindness from one human to another. While it would be so easy for Paul Laverty’s script to be nothing but raw anger and rage against the system, it finds a warmth and humanity to this story that is able to engage the viewer on an emotional level as well as a social one.


Part of that comes from the scripts ability to ground its characters in the realm of realism in the same way it does with its story. Every character within this film feels like a genuine and fully fleshed out person whom over the course of 100 minutes you come to know and befriend. They could be people you already know, people who endure struggles and hardships to a point that almost goes against the rules of storytelling. Loach is able to play with your emotions by manipulating your own expectations, out of some subconscious assumption that everyone will eventually succeed Loach manages to turn that against you to heart wrenching results. These people with whom you have laughed and shared memories with are suddenly failing time and time again, and it is tough to watch.

Though it sounds odd for this kind of drama, comedy ultimately plays a large part in why is succeeds. The script and performances find the perfect line between comedy and tragedy that ultimately makes the story so endearing and engaging. In fact a majority of the movie would probably be funny in a farcical way if it wasn’t so painstakingly true. Loach’s grounded direction adds to this as well, paying close attention to the harsher details of modern life and using them to further illuminate why this struggle is such a large one. Though the relative lack of style or flair might seem uninspired at first, as the film progresses you realise that Loach’s direction is seeking to shed light in the sheer bleakness of the situation, and it accomplishes that perfectly.


The crowning achievement of the film however, may be its two central performances. In the titular role Dave Johns is able to create a character of such empathy that even those who have never been faintly aware of his situation before will be entranced by his plight. His quest to maintain his dignity but continue to live in a world he no longer understands is played for humour and heartbreak, both of which are executed perfectly. His dynamic Hayley Squires only makes it all the more rewarding as her role acts as a counterpart to Johns, but at the same time finds a humane connection that is likely to resonant with anyone.


It is easy to see why Loach came out of retirement to make this film (which many believe will be the last of his career) because it is not one of pure anger and social indictment, though those are two major presences throughout. At the heart of it this is a story of human lives, a story that Loach has been telling for his entire career.


Despite its depressing nature and political undertones, the warmth and humanity is what makes ‘I, Daniel Black’ an extraordinary work of social realism.