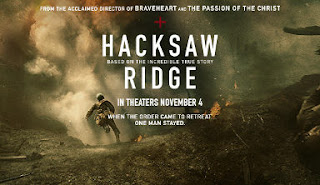 "Private Doss, you are free to run into the hell fire of war without a single weapon to defend yourself."

Mel Gibson, is that it? Can we please leave now without any further ado or awkward subjects? Well as I explained in my review of ‘Blood Father’ Gibson’s personal life has no merit for me on how I judge his work, that is unless it happens to be a film whose central thematic conceit is grappling with some kind of complex concerning maintaining one’s faith in the wake of a masculine image and violent, self-destructive environment. Good thing ‘Hacksaw Ridge’ won’t contain any of that, right?


Private Desmond Doss (Andrew Garfield) enlists in the army but is immediately reduced to an outcast due to his refusal to carry a firearm as part of his beliefs as a conscientious objector. When he finally reaches the warzone at the Battle of Okinawa, despite not being armed with a single weapon, his heroism and bravery would eventually make him the first objector to be awarded the Medal of Honour.


I think it’s safe to say that as an actor and director Mel Gibson is a unique talent, and the prospect of seeing him helm another project, particularly one of this size and scale. In many ways ‘Hacksaw Ridge’ acts as the culmination of Gibson’s career as a director thus far, which is not to say it is his best effort. But in terms of a film that blends the visceral and unsettlingly violent images of war we’ve witnessed in ‘Braveheart’ to the unapologetic expression of faith in ‘The Passion of the Christ’, almost everything about Gibson’s body of work and state of mind acts as an ideal counterpart to bring this story to life. It is the purest representation of his own damaged psyche, a deeply personal movie that is as much a personal confession as it is a story of bravery.


But contrary to what one might expect, Gibson’s action scenes are not always presented as a never ending splatter fest. As he frequently switches to his characters emotions, pressing tightly to their own realisation of the hell scape around them shortly before the audience are treated to viewing what they are experiencing. When that moment comes it is unlike anything I have witnessed in a war film since Spielberg’s ‘Saving Private Ryan’. Though other directors like Ridley Scott or Kathryn Bigalow have been able to capture the ferocious intensity or chaotic disorder, Gibson’s film unleashes a vision of hell few filmmakers have replicated. It is violent and sadistic in almost every regard yet also utterly engrossing in its presentation. The carnage is difficult to accurately describe in words, as dismembered bodies fly, explosions ring out with such ferociousness that it becomes a terrifying scenario all on its own. Gibson’s eye for storytelling and flairmake it even harder not to be dragged head first into the experience. The scenes of war are both intimate and epic, but to call them stunning would be a lie, as violence of this magnitude yet framed at such close-quarters is ill suited to such a description.

This doesn’t quite allow the film to escape the inevitable questions concerning its hypocrisy. Should a film devoted to pacifism be so focussed upon violence between men? It depends which aspect of Doss the film takes the most pride in when describing him as heroic. Was he a hero because he saved lives, because he refused to take lives, because he maintained his faith or simply stood against adversary in all its forms? Ultimately that is up to you, and while ‘Hacksaw Ridge’ does its best to leave interpretation as the key factor over its purpose, it is hard not to notice the film tearing itself apart under the strain of which direction it should take. Is its director more intrigued in representing the sin than the salvation I wonder?


Luckily this is redeemed somewhat under another guise that the film can take. The guise that it is a character study of Doss and not a lesson in morality. If that is the case then I could easily accept it, due in large part to Andrew Garfield’s truly terrific performance as Doss. As opposed to a transient saint Doss is portrayed as a complex man with conflicting emotions when it comes to his decisions. Garfield allows the character to express more doubt and fear over his own self-righteousness than less confident actors would allow. He tackles Doss’ motivations and ideologies but also the ways in which he doubts himself even at the best of moments. Despite the pre-action narrative feeling poorly paced and oddly structured at times, Garfield and a strong holster of supporting actors such as Hugo Weaving, Sam Worthington and Vince Vaughn each turning in their own fine performances to ensure that it at least remains interesting. Despite being more of an expository vehicle for the gargantuan achievement that is the second act, it works well enough and ultimately is worth the price.


Like it’s director, ‘Hacksaw Ridge’ has its flaws and it frequently at odds with itself, but its undeniable power, ferocity and sheer strength of vision make it a bold and endearing effort.