Talkin' Scorsese: Bringing Out the Dead 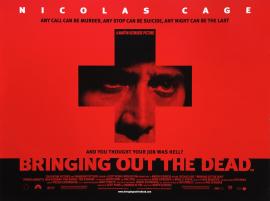 "Here's to the best job in the world."

As far as writer/director partnerships go, Paul Schrader and Martin Scorsese formed a deeply impressive team that has produced each participant’s best work in the medium of film. Having worked together on ‘Taxi Driver’, ‘Raging Bull’ and ‘The Last Temptation of Christ’ Schrader and Scorsese’s last collaboration to date was this 1999 drama, which as it turns out is another underappreciated classic from the director.


Haunted by the patients he failed to save, an extremely burned-out Frank Pierce (Nicholas Cage) works as a Manhattan ambulance paramedic and now, over three fraught and turbulent nights, must fight to maintain his sanity as one horrifying emergency after another unfolds before his very eyes.


It may be difficult to imagine now, but there was a time when Nicholas Cage was not only a wonderfully eccentric action star and box office draw (as seen in ‘The Rock’, ‘Face/Off’ and ‘Con-Air), but he was also a sought after dramatic actor, one that worked alongside the best of the best like Francis Ford Coppola, the Coen Brothers and David Lynch as well as a recent Oscar win for his work in ‘Leaving Las Vegas’. Amongst that impressive body of work (before it all went to horribly, bafflingly wrong) was his pairing with Martin Scorsese for ‘Bringing Out the Dead’ where Cage not only reminds us of why he was once such a revered talent, but makes us wonder how on earth he fell so far.


Cage’s haunted and world weary performance is what underpins the entire film, provides it with a sense of structure and cohesion as well as its immense compassion and thematic depth. As a tired man on the verge of breaking point Frank is the centrepiece of the entire film, and Cage is able to bring that to life with such conviction and complexity. Frank seems to be in a state of perpetual anxiety yet his professionalism and skill is always evident so as to never make the viewer question how he hasn’t cracked already. His vulnerability shines through amid this powerful duty to do his job and all the while chaos seems to be erupting around him and yet each time Cage’s character faces a new horror he provokes a slightly different reaction, adding variety, complexity and a deep sense of empathy to the performance.

The film has no real plot, yet Schrader’s screenplay (based off the book of the same name by Joe Connelly)is able to find structure within the sprawling series of events, using three consecutive nights as the bare bones of his narrative’s structure from which to place each manic and brutal event. Instead of drifting into one random occurrence after another the script is somehow able to include a note of clarity by focussing in on its central character (something Schrader always excels at, as you realise that you couldn’t really describe the plot of ‘Taxi Driver’ or ‘Raging Bull’ without describing the main character of each story). The narrative is so intrinsically linked with its main character that it almost can’t help but become a remarkable study of a man and his great pain.


At the same time the story offers no easy answers or cheap resolutions. It sets up each internal and external crisis and rarely provides the characters with a way out that will please everyone or keep their conscience clear. It adds to the brutality of the film more so than the horrific accidents playing out with each passing emergency call, that ultimately for all their skill and ability to retain a grasp on reality, Frank and his team of paramedics will never be able to save everyone and as that fact becomes crushingly obvious to the audience we begin to understand Frank’s own descent into depression.


Despite being in the familiar territory of New York City, this is a vision of the city that Scorsese has rarely shown before, or since. Gone are the usual hyper stylistics of the New York from ‘Taxi Driver’ or ‘Mean Streets’ and instead we get the cold and clinical treatment in order to increase the sense of visceral harshness. Scorsese adopts an almost documentary like view of the story, choosing to display each terrible ordeal in all its unflinching glory. Yet despite this hands on approach to portraying the events in question, the film still pulsates with a sense of energy and urgency, rarely letting up from start to finish. While this effect if initially used to grab the viewer’s attention it is soon turned against us, as like Frank we almost want the horrors to stop, if just for a moment. But reality is rarely so forgiving, and despite the fits of madness and struggle to maintain one’s sanity, reality is what Scorsese is capturing here.


Engaging on a visceral and emotional level, underpinned by a fantastic character study that is brought to life with great empathy by Cage’s strong performance, ‘Bringing Out the Dead’ is an underrated masterwork.