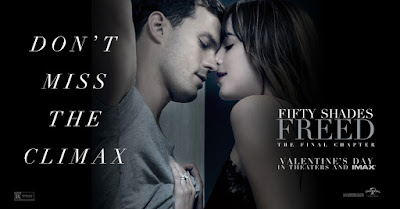 "You may call me Mrs Grey."

The best trilogies in cinema are often the most consistent ones. Whether they be Kieslowski’s ‘Three Colours Trilogy’, Linklater’s ‘Before Trilogy’ or Wright’s ‘Cornetto Trilogy’. These trilogies have a set standard of quality and stick to them with all three instalments. So, on that front, there is a great sense of consistency the ‘Fifty Shades Trilogy’. Each instalment has had a distinct quality that has carried over into the next one. The only slight problem is that the level of quality happens to be rock bottom.

Believing they've left behind the shadowy figures from the past, billionaire Christian Grey (Jamie Dornan) and his new wife, Anastasia Steele (yes that is her name, someone thought of that, someone who claims to be a writer…oh and the character’s played by Dakota Johnson), fully embrace their inextricable connection and shared life of luxury. Just as the Greys begin to step into their new roles, sinister events come to light and jeopardize their happy ending before it even begins.

I know that both critics and audiences tend to use hyperbole, which is something we should all avoid since opinions on movies can often be nuanced things. But I well and truly believe that ‘Fifty Shades Freed’ may be one of the worst films I have ever had the misfortune to sit through. On the one hand I shouldn’t be surprised given the quality of the preceding two films, but even when taking that into account I was struck by just how abysmally incompetent this movie was.

There is no discernible plot to it, I mean literally nothing. Scenes play out with a complete lack of conflict, structure or any discernible event that would make them even mildly interesting. There’s no inkling of structure to the movie, with the main conflict being introduced and resolved within the final fifteen minutes of runtime. For the rest of the movie we see the two characters engage in the most inconsequential kinds of conflict you can imagine. It’s a conflict of interests between two blank slates, driven by events that are as irreverent as changing an email address. None of these scenes build on one another or develop into anything greater than their basic set ups. It’s almost experimental in how it endlessly meanders around, looking for a way to kill time.

The characters are so thinly written that having now spent a total of six hours in their company I couldn’t tell you a thing about them. Anastasia Steele has to be the base model for passive protagonists at this point. Any shred of identity she had in the first film gradually disintegrates as she morphs into this self-entitled object, which might make for an interesting movie if ’Fifty Shades Freed’ wasn’t condoning this power dynamic at every opportunity. It acts as if the audience are actually supposed to be invested within this relationship as if it’s a tangible, fleshed out romance. 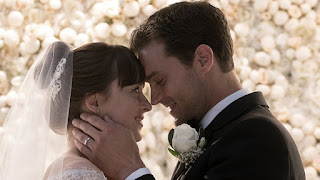 Make no mistake, Christian and Anastasia are objectively terrible people. Mr Grey is a sociopathic and highly controlling millionaire whilst Anastasia is hired and subsequently promoted in the company run by her own husband. I’m not saying it would be impossible to empathise with these kind of characters, but that would take a movie of intelligence and substance rather than this thinly veiled softcore porn. Mind you, I say that, but I also think you would struggle to find a film that has less sexual tension or in fact sexual content that ’Fifty Shades Freed’. If your idea of kinky sex is partially clothed missionary between two people who lack any kind of romantic chemistry, then good news because apparently Hollywood is catering to you now!

These various elements almost make me feel bad for criticising the acting, because with a script as horrendous as this you could cast Daniel Day Lewis as Christian Grey and still not have a final product that was even remotely intriguing. So I won’t level too much of the blame on Dakota Johnson or Jamie Dornan. But I will say that it’s fairly easy to tell that they are also checked out of this series by now. Their delivery is so bland and expressionless that it almost seems as if they are actively making an effort to instil as little emotion as humanly possible into every line of dialogue. It also doesn’t help that James Foley’s direction feels so flat that the shot composition hardly even places them in the same frame.

I never thought I would find myself praising ‘Fifty Shades of Grey’, but in comparison to this instalment of the series, at least that movie was making a minutia of an effort. There was small trace of the filmmakers trying to bring something from the script. But of course, E.L James promptly stepped in and stamped out that nonsense so has to have the next two movies mimic her work as closely as possible. Philip K Dick was fine with Ridley Scott changing aspects of his novels to make ‘Blade Runner’, but that apparently we can’t such a disservice done to what started life as ‘Twilight’ fan fiction written on a Blackberry phone.

The only solace is that it’s finally over.