"I expect the worst out of people in the name of reason."

In an age where movies rapidly become more bloated and it seems like there isn’t a single film these days that couldn’t be improved by shaving a few minutes off, it’s surprising to see a movie like Sally Potter’s ‘The Party’. Potter’s film comes in with a runtime of just 71 minutes, barely qualifying as a feature film at all. Going with the assumption that no good movie is too long and no bad movie is short enough; that should at least give the movie one immediate advantage from the start.

Janet (Kristen Scott Thomas), a politician for the opposition party, has just been announced shadow minister for health and is having a small celebratory party at her house. As her guests begin to arrive they each have their own special announcements to make that will surprise and shock the party, fracturing their dynamic and exposing their hidden motivations in the process.

‘The Party’ has been described by some as a comedy which initially surprised me because I certainly don’t recall laughing much during the film itself. But on reflection I think that actually stands as a testament to Potter’s ability to craft an intriguing and involving story because I was too riveted in the interactions and motivations of each character to notice the more humorous side of proceedings. It’s only with the favour of retrospect that I can recognise ‘The Party’ as a tragicomic piece of cinema that is stylishly composed and wickedly written.

Right from the start Potter uses her runtime wisely, instantly establishing an unspoken air of tension as the group of people begin to gather. Whether it’s from the deliberate camera shots that draw your attention to the nuances of how each character is reacting at any given time, or the intrigue that comes with uncovering the way their dynamic works. The deliberate staging and placement of each character makes the movie feel like a magnetic stage play, but with the added benefit of having Potter’s camera guide your eye to each new piece of unfolding drama.

I definitely appreciated ‘The Party’ on one level as a drama, and if you choose to view that way you will likely think it to be fine. But when you start to view it as a biting satire as well, then it starts to reveal its true brilliance. The characters are exaggerated in a certain sense, to a point where at times they explicitly state their ideals and intentions. If this were a conventional drama this would come off as contrived, but under the shelter of satire it allows ‘The Party’ to turn into a strikingly relevant tragicomedy, one that verges on the absurd at times but always grounds that irreverence with utterly despicable, yet still immensely watchable, characters. 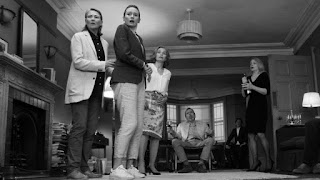 The cast seem to understand the tone perfectly as their performances exist very much on the same line. Kristen Scott Thomas lies at the dramatic core of the film, and probably garners the most empathy through her role. Cillian Murphy is almost hilariously pitiful as a banker who is clearly on the edge of a breakdown right from the start of the movie, and just barely keeps it together on numerous occasions. Murphy is jittery and agitated in a way that is just as likely to inspire laughs as it is nervousness. Timothy Spall barely speaks for the movie’s first act and even he manages to paint an intricate portrait of who his characters is, which leaves him adequate room to develop as the movie progresses.

As I said before, the elements in the narrative that might be to the detriment of a serious drama somehow make ‘The Party’ stronger. The plot can seem a tad melodramatic and contrived at points but that almost plays into the broader satire the film is dealing with. The plot mechanics are just devices that allow for the characters to reveal their true selves, and in doing so they reveal what the film is really about. Though it sometimes can’t help but overtly state its themes as the characters argue amongst themselves, for the most part the movie does a superb job of keeping things restrained and minimal.

Despite having such a limited space to work in (the movie’s set amounts to three rooms and a garden) Potter directs her movie as deliberately as she uses her runtime. Nothing feels repetitive and everything feels involving. The images are immaculately composed in stark black and white, but also having a sense of freedom to it with her use of handheld cameras that give a free flowing nature to how the characters manoeuvre around the house. It’s beautifully paced in terms of editing, never letting a single scene drag on for too long or feel as if it has been cut short. Though it’s not a perfect movie overall, ‘The Party’ is a rare film that I feel couldn’t be improved by being shorter.

An involving piece of tragicomedy that is as layered as it is entertaining.