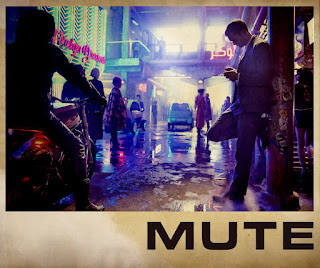 "Do you know what it is, to make your dreams come true?"

I was definitely excited by the idea of a new film from Duncan Jones, especially one that promised to return him to his roots via being labelled a “spiritual sequel” to ‘Moon’. As much as I adored Jones’ first film he’s never quite reached those heights of excellence again, with ‘Source Code’ being solid up until its third act and ‘Warcraft’ being a valiant but ultimately flawed effort to translate a video game into movie form. Basically, I could go either way in terms of guessing the quality of ‘Mute’, but it definitely intrigues me.

In the futuristic city scope that is Berlin forty years from now, a bartender named Leo (Alexander Skarsgard) who lost the ability to speak after a childhood accident, must begin a search for his missing girlfriend who vanished unexpectedly one night. Meanwhile, elsewhere in the city, two American surgeons (Paul Rudd and Justin Theroux) may provide him with some semblance of the answers Leo needs.

In a lot of ways ‘Mute’ reminds me of another Netflix genre piece released recently, that being ‘Bright’. Now before you panic I can state that ‘Mute’ is not nearly as atrocious as that monstrosity (if only they hired a screenwriter for it….oh well) it does suffer from a lot of the same problems. The main one is a lack of effective world building. Probably the first thing that struck me about the landscape of Jones’ film was that it felt awfully derivative of a dozen other dystopian environments, from ‘Blade Runner’ to ‘Ghost in the Shell’. Of course, the overall aesthetic of most science fiction films are bound to reflect films like those given that they are two of the most influential science fiction films of all time.

The difference is that the films I previously mentioned have a consistent aesthetic that makes the world feel fleshed out from its giant architecture to its smallest details. ‘Mute’ on the other hand is so inconsistent in regards to its production design and overall look that one scene will be set against the giant city scape complete with flying cars and a neon bathed atmosphere, only to then transition to a completely ordinary setting that would look at home in any setting. There’s no motif or scheme that rings through the locations within the film, making it hard to become invested in this world as a tangible setting. 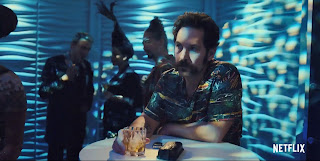 But perhaps that lack of investment also comes from some poor storytelling, because ‘Mute’ contains a good chunk of that as well. The story is peppered with interesting elements that spark intrigue, but these various elements are all completely disconnected with one another. In fact so are the characters. ‘Mute’ tries to tell a multi layered story but instead of its various plot threads complimenting or building upon each other, they come across as concepts randomly bumping into one another. It’s a random assortment of narratives that just happen to coincide for a messy and confusing third act. Any semblance of motivation for the characters also seems to fly out of the window at that point, as the actions they all undertake seem to be completely random.

I was at least expecting some visual flair from Duncan Jones as he had demonstrated with his previous directorial efforts, but even that seemed a little off. The palette of the film was visually pleasing but lacked any depth of feel or versatility. I feel like a majority of the film was spent framing its characters in the exact same medium-close up that resulted in a flat and lifeless texture. There’s also no sense of pacing to the movie, with some story beats taking an agonizingly long time to come about (I feel like you could recap the first hour of the movie in about twenty minutes for the narrative points it conveys) or alternatively they come bombarding towards the viewer all at once. The end result is somewhere between very boring and highly confusing.

It’s a shame because I feel like there is a worthwhile film buried somewhere within ‘Mute’. If you could strip away the excess and zero in on the characters Jones could have crafted an intricate study of these three individuals. It’s clear that his actors have the talent to convey a deeper dive into the characters they are portraying because they each do a good job with the material they are given. Rudd finds an excellent balance between unstable and charismatic that results in a bit of tension over his interactions. Skarsgard conveys a great deal with almost no dialogue whilst Theroux is unnervingly creepy when he needs to be. It’s only let own by the fact that the screenplay forces the characters to deviate from any kind of motivation and just act irrationally and idiotically for the big third act finale.

Too many half-hearted concepts and not enough focus or intrigue, ‘Mute’ is a movie in the midst of an identity crisis, and it’s not that fun to watch.