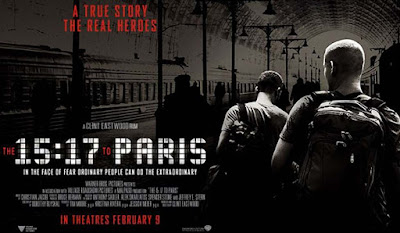 "Do you ever feel like life is just pushing us towards something?"

Between this and ‘Sully’ I can’t help but think Clint Eastwood has settled into directing feature length movies about 90 second incidents. The difference between his prior movie and ‘The 15:17 to Paris’ is that at least ‘Sully’ had a bit of substance to its second half, focussing on the long term implications of the protagonists actions and the cultural impact around them. ‘The 15:17 to Paris’ doesn’t do that and for the life of me I can’t fathom what it was even trying to do in the first place. It’s a genuinely baffling piece of filmmaking.

Following the lives of three friends as they navigate various trials and tribulations that eventually lead them to catch the 15:17 train to Paris on August 21st 2015. As they witness what they think is a possible terror attack unfolding in front of them they spring into action and in doing so change their lives forever.

Those few sentences I just typed to provide a brief summary of the movie’s premise is usually the easiest part of writing these reviews. But in the case of ‘The 15:17 to Paris’ it might be the most difficult because I’m struggling to make this story feel involving for a few sentences, let alone an entire movie. Obviously there’s no denying the heroism of these men. What they did on that day was an act of unspeakable bravery that should be commended by anyone and everyone. But with that being said, what the hell was this movie?

I know I keep asking that question but I am genuinely baffled as to what Eastwood or the writers were trying to achieve in the approach they took. They devote some time to exploring the lives of the characters leading up to the event itself but it all comes across as contrived and meaningless. None of these flashbacks hold any weight and only feel relevant unless the viewer is well aware of what will eventually transpire. The problem is that if you view the movie with that mind set then the movie tries to raise pointless tension in the moments before the event. A majority of the movie has treated the audience as if they already know how this story ends, and yet it still tries to build an air of suspense over the terror threat itself. 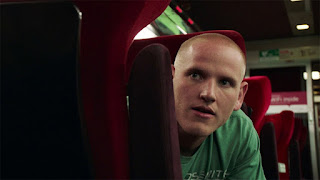 This also brings me back to the issue of how the movie tries to stretch an event that lasted for a few seconds into a feature length film, because it doesn’t work. On a structural level there’s no inciting incident or active role in the protagonists part that would make me feel invested in their stories. We’re just passive viewers of their lives and vacation, and only in the film’s final act do we see them making that decisive choice. It would be an ideal subject for a documentary but as far as narrative features go, where we need story structure, pacing, development, intrigue and so on, it all feels like a bumbling waste of time. It’s not a criticism of the real life people behind this event, it’s a criticism of the choice to present their story in a way that was ill suited.

The reason why I have to keep clarifying that I am critiquing the movie and not the event itself is due to another problem with the movie, one that I don’t take any joy in pointing out. For some reason, Eastwood made the decision to cast the principal characters as themselves. It’s rather unsurprising to learn that these individuals aren’t the most competent actors. Even though they are re-enacting conversations they themselves had, their interaction and dynamic feels stiff and awkward partially for that exact reason. It’s obvious they are trying to recapture a chemistry that has already come through naturally. Instead of having a staged conversation that feels flowing and natural it just comes across as a few people waiting for their cue to speak.

What makes this even worse is that the script populates itself with the most banal and contrived dialogue that even skilled actors would have a hard time pulling off. To make conversations about nothing sound interesting is no small feat for an actor, let alone a group of real life heroes who probably deserve better than having assholes like me judge them for their acting ability. I mean seriously did no one think that maybe it wasn’t fair to put these brave people in a situation where they would have to be critiqued for their ability to do something they have never done before on a professional or even amateur level? It just serves to make the whole movie even more redundant. These people are not going to look on the event they themselves lived through in anew light or different perspective. They are not going to dissect themselves via a performance in the way a professional actor would do with a character. So once again, I ask, why does this movie exist?

Why? Just why? Forever and for the rest of eternity regarding this movie, just why?