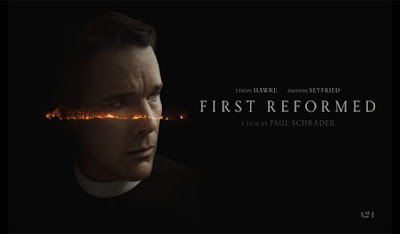 "My hands shake as I write these words."

Paul Schrader certainly has themes that he likes to revisit. One does not have to look far to see elements of his latest movie ‘First Reformed’ that feel reminiscent of his past masterworks. “God’s lonely man” was a tagline used to describe ‘Taxi Driver’ and also seems applicable here, as is the protagonist wrestling with his inner demons seen in ‘Raging Bull’ as well as the crisis of faith seen in ‘Last Temptation of Christ.’ But while the broad themes are similar, the execution pushes beyond anything the veteran filmmaker has done so far.

Ernst Toller (Ethan Hawke) is the pastor of a First Reformed, a small church in upstate New York with a prestigious history but dwindling attendance. Leading what appears to be from a glance a stable and faith filled life, Toller rapidly spirals out of control after a soul-shaking encounter with an unstable environmental activist and his pregnant wife (Amanda Seyfried).

As well as themes of faith, inner demons and self-destructive tendencies, another noteworthy aspect of Schrader’s filmography is his love of transcendental filmmaking. Before he became a writer/director Schrader wrote a book on the method of making movies under a transcendental lens and theorised that empty space within a movie’s plot can immerse the viewer rather than serve as a disconnect. By leaving the viewer room to ponder the deeper implications of what the film is trying to say, thereby drawing them in deeper to the artist’s intent.

You can find a lot of transcendental method within ‘First Reformed’ and it is necessary to the film’s overall impression on the viewer as Schrader is presenting several hefty themes. The film unfolds almost as a stream of consciousness but framed around a deeply layered character study that paints its portrait slowly and assuredly. It’s only by the end of the movie that you are granted the full picture of who Ernst Toller is and how deep his inner demons run. It plays to the strengths of what Schrader has exhibited in so many other masterful screenplays. He presents an unreliable narrator rocked by his own crisis of faith, and uses each of those elements to evoke such constant intrigue.

Just as Schader uses transcendental techniques within the narrative, he also uses them within the framing and composition of the film. The film is shot in academy ratio which not only creates an enclosed space around the width of the frame, but also expands the top. There’s a lot of negative space within numerous shots in ‘First Reformed’ which reflect the emptiness Toller seems to feel as his faith becomes more fragile. Or perhaps the space is meant to evoke the sense that there is a presence within his life, just one that remains elusive and ominously hangs over him.

Though this measured approach means the pacing of ‘First Reformed’ can drag at times, the spiritual atmosphere of the film is incredibly effective. As Toller grapples with his own crisis of faith we feel each empty second passing by. We can empathise with his own aguish as he searches for meaning and hope in a world that seems increasingly cynical the longer we inhabit it. The film also retains an impeccable sense of focus, never losing sight of its own themes and constantly developing each one as the plot continues to unfold. 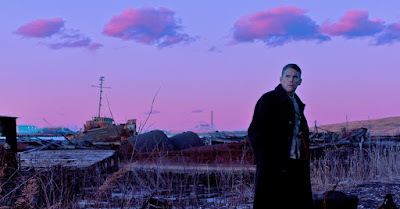 Perhaps the most involving aspect of the film is watching Ethan Hawke’s performance because it is truly mesmerising. Hawke plays the role with such reserved intensity that he instantly invites the viewer to uncover his inner workings. Hawke is pleasant and empathetic enough to paint a portrait of a kindly preist, but also elusive enough to indicate that something more sinister is lurking beneath the surface. When we do get glimpses of those darker inclinations within Toller Hawke once again nails the role. He effortlessly conveys a palpable sense of menace, as if this man’s unravelling could easily lead to an unstable and dangerous individual. It’s part of what makes the viewer invested in Toller retaining his faith. For no other reason than out of fear of what might happen to others if such a man were to lose it.

There is a lot of ambiguity to Schrader’s film that some viewers may find overly obtuse. No aspect of the movie provides a clear cut answer and sometimes you have to search for meaning within the events in the same way the characters themselves continuously search for meaning. There are also moments of heavy symbolism that break the realist of this once grounded drama and become completely expressionistic. Certain sequences can be thought of as being entirely symbolic or only partially, and it’s that unclear distinction between the two that drives so much of the film.

But even when you look past the allegorical moments, ‘First Reformed’ still functions as a deeply compelling drama. The emotions that the script conjures are earned and raw, creating a picture that depicts a deeply damaged individual who is slowly being destroyed from the inside. Anyone who has undergone a disconnect with the world around them can relate to Toller, and subsequently fear for what he may become.

Dramatically powerful and thematically resonant, ‘First Reformed’ stands alongside some of Schrader’s best work as a filmmaker.