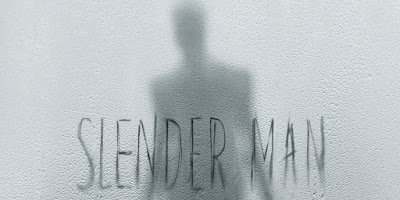 Hollywood does have a trend of being late to the party when it comes to figures/properties like Slender Man. If you are around my age you may remember seeing it crop up on the internet as one of the more popular creepypastas. You may have played the games once or twice and quickly got bored of their simplistic gameplay and derivative layout. Then you basically moved on and mostly forgot about it. So of course now is the ideal time for a film adaptation to be released, years after anyone bestowed any relevance to the property at all. Smart move Hollywood.

Small-town best friends Hallie, Chloe, Wren and Katie go online to try and conjure up the Slender Man a tall, thin, horrifying figure whose face has no discernible features. Two weeks later, Katie mysteriously disappears during a class trip to a historic graveyard. Determined to find her, the girls soon suspect that the legend of the Slender Man may be all too real.

The great irony in choosing to make a ‘Slender Man’ movie, especially one that is little more than a tired and derivative horror film you have likely seen dozens of times before, is that there is already a great movie based on the property. It’s a 2016 documentary called ‘Beware the Slender Man’ that discusses an incident in which two girls attempted to murder one of their friends, citing Slender Man as a means of inspiration. It examines the place an internet phenomenon can hold within the manifested paranoia of a damaged individual. It makes for an extremely disturbing portrait of viral influence and the ability of certain people to rationalise a connection between fallacy and reality.

All of that could have made for an interesting narrative feature, underpinned with themes and ideas like that. Obviously not directly recreating said incident due to not wanting to monetise a very real and recent trauma, but tackling a subject like this in a more subversive approach would allow a film like ‘Slender Man’ to distinguish itself. Unfortunately the product we have here is far from interesting on any discernible level. In all honesty I suspect even those seeking nothing more than one last cheap thrill to satisfy their obsession with this figure of viral horror will leave dissatisfied as there are infinitely more interesting approaches to the myth available from a Google search.

I feel somewhat guilty for holding ‘Slender Man’ in comparison to the material relating to it, because I always aim to judge a film for what it is, not my idealised version of what it “should” be. But it really is baffling how frequently the film indicates that to might take a more interesting approach to its subject, only to then give way to the most predictable outcome. It’s not just on a narrative front that the film displays this pattern. Visually each set piece starts with a slight flourish that suggests a moment could be elevated by some dynamism on the director’s part. But too many of these scenes resort to an over reliance on quick edits and jump scares which rob the scene of any potential suspense it might have held. 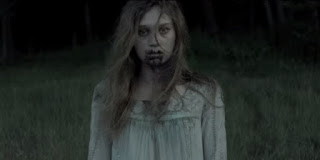 On top of that there are scenes that simply do not look as if they have been lit properly. Whether it’s as a means to mask the low production quality or create an empty sense of fear, I homestly found myself straining to make out what was happening in various key scenes. ‘Slender Man’ also lacks any compelling framing or compositions. The film seems to have three variations when it comes to how to present a scene, and almost all of them fall equally flat. Conversations are delivered monstrously and without variety in the camerawork, scary scenes are in service of an underwhelming jump scare, and that’s about as far as it goes.

As a result of each and every intended scare being defused, ‘Slender Man’ rapidly loses momentum to a point where I defy any viewer to unequivocally say they felt engaged throughout. There are so many scenes of bland exposition and empty character moments in a narrative that is not permeated with nearly enough frights to succeed as a horror spectacle. Despite their simplistic layout, the games were at their core a decent exercise in suspense at least. But none of that can be found within this film adaptation. It’s barely good enough for a cheap thrill due to how flatly each intended scare is presented.

‘Slender Man’ also succumbs to the kind of logic that can only be found within truly bad movies. It may seem pedantic to criticise the rules regarding a supernatural entity but when the film specifically lays an outline for how the threat will behave only to then disregard it whenever it is convenient for the script to progress is beyond disingenuous. What’s even worse than the inconsistencies within the movie’s established logic is the ever changing motivations of the characters. Priorities are altered from scene to scene, characteristics shift wildly and certain characters just seem outright forgotten by the script at various points throughout the plot.

‘Slender Man’ is simply another forgettable horror movie, and no amount of brand recognition will change that.