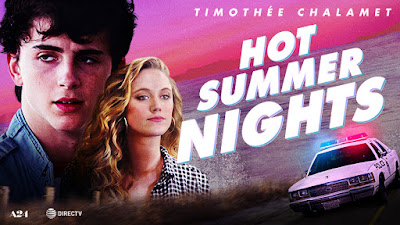 "So you're sending me away for the summer? That's very cliché."

You would struggle to find anyone who had a better year than Timothee Chalamet did in 2017. Despite each role being somewhat minor he still left quite an impression through his performances in Greta Gerwig’s ‘Lady Bird’ and Scott Cooper’s ‘Hostiles’. But of course his biggest success came with his phenomenal turn in ‘Call Me By Your Name’ which earned him a well-deserved Oscar nomination for Best Actor. It’s the kind of year that makes you instantly excited for anything the actors is attached to next. Which brings us to ‘Hot Summer Nights’.

During one scorching summer in Cape Cod, Daniel Middleton (Timothee Chalamet) is an awkward teenager who quickly gets in over his head when what starts as a simple money making scheme rapidly becomes a miniature drug empire. As well as the stresses of running his own illegal business, he also finds himself falling for his business partner's enigmatic sister during.

It’s hard not to be enticed by the trailer for Elijah Bynum’s debut feature because it looks like madcap collection of incredible moments and incidents. There’s no denying that there are not some truly impressive and well-staged scenes across the movie, but they are rare in their appearance and hardly enough to sustain the film as a whole. Ultimately the movie is a cheap and uninspired tour through a series of clichés that you might find in any coming of age or crime drama.

I can certainly agree that there is some intrigue in trying to merge those two genres since they each consistently deal with themes of parental relationships and identity. But ‘Hot Summer Nights’ never consolidates this clash of genres and instead just bounces awkwardly in between. The movie feels both strangely melodramatic but also underplayed. On the one hand it struck me being somewhat ludicrous that Danial would amass his own drug empire over the course of the summer but at the same time I never felt any sense of weight or severity to that story device. It wants to be playful and dramatic but can never draw a clear line between the two.

A24 isn’t exactly a studio you could accuse of throwing out a cheap cash grab, but in purchasing and pushing a film like ‘Hot Summer Nights’ in its rostra I wonder if that move was purely in the name of monetary gain. After all they have made a concerted effort to capitalise on the stardom of Chalamet, emphasising his name and role in the advertising of this movie. There’s no distinct voice or unique vision to find within the film because ultimately there isn’t much of anything. The dialogue does not possess any rhythm or wit, mostly just being functional at best. There’s no intrigue or innovation to how the story is presented and unfolds. This is all putting aside how uniformly bland the story is as a whole, being littered with tropes and clichés. 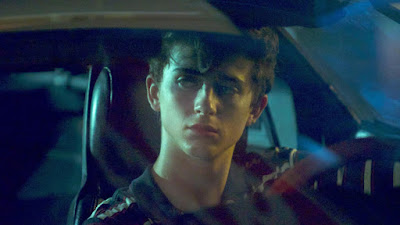 But as I said at the start of this review there are some moments of flair to be found within the movie. Some of the character introductions in particular are wonderful to behold, evoking a sense of intrigue with each introduction and creating a distinct mood that fits their subsequent characterisation very well. It’s a moment of interest that if anything only makes the subsequent descent into tired tropes more disappointing. The way we are introduced to each character inspires a sense that their journey might be unique and they could develop in unforeseen ways, as opposed to what actually happens which is about as predictable as they come.

Given that this was filmed before his start turning year during which he worked with some of the best filmmakers working today, I was a little apprehensive that in retrospect Chalamet’ s performance would not hold up to the quality of his current work. But I’m pleased to say that his performance is not only excellent but boosts the film as a whole. There’s a sense of energy and underlying charisma to his portrayal of Daniel that makes his subsequent power play somewhat believable from a character standpoint, even if the film’s script can’t do the same. But at the same time Chalamet adds a layer of naivety to his performance that works well to increase the tension in his ensuing decisions. As an audience we are well aware that he is capable of making mistakes, and not invulnerable to the consequences of any possible mistakes he might make.

The cinematography by Javier Julia is also fantastic. It works wonders to evoke a mood and associative location, matching the tone of the film’s title perfectly. You look at any exterior shot of this film with the chosen colour palette and framing choices, and you instantly buy into the atmosphere of these hot summer nights. Despite his shortcomings from a broader story perspective Brynum even injects some evocative compositions into the film which allow some of its images to leave a lasting impression, even if the story around them falls flat.