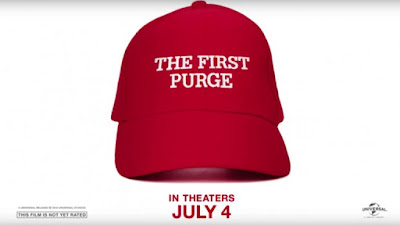 "Tonight, we'll see the good and evil in everyone."

I always feel like ‘The Purge’ movies represent a severe waste of potential. In an age where several genre movies have proven themselves as intriguing social allegories ‘The Purge’ continues to boast the most surface level, thinly conceived philosophical underpinnings of any popular movie of late. It’s concept is played too seriously with too little substance to be treated as anything that could be called enjoyable, but at the same time the movies insist upon their own significance so much that they ruin any dramatic impact they could potentially hold. Anyway, here’s another one.

To push the crime rate below one percent for the rest of the year, the New Founding Fathers of America test a sociological theory that vents aggression for one night in one isolated community. But when the violence of oppressors meets the rage of the others, the contagion will explode from the trial-city borders and spread across the nation.


“So, you know when the purge started did people get into it right away or were they more like ‘Wait, what? This is gonna stop crime how exactly?’” – Morty Smith.

If I do possess any level of intrigue over ‘The Purge’ as a franchise, it would be to try and answer that question posed in ‘Rick and Morty’. It’s not that the premise and concept that drives ‘The Purge’ is ludicrous, it’s that the franchises are always caught in this awkward middle ground of wanting to explain their own mythology and treating their central concept as a genuine ideology, whilst also aiming for the lowest common denominator of action cinema. They want to convey the illusion of containing socially relevant themes without putting any actual effort into developing those themes which as it turns out don’t exist in the first place.

There’s also a real sense of cognitive dissonance in how these movies discuss and present violence. On the one hand everything about the narrative and characters seems built to convey the idea that the concept of the purge is fundamentally flawed and need to end. But then at the same time they revel in the bloodshed and violence to a degree that feels like they are indulging the very characteristic they want to preach against. The desire for violence is an eternal paradox that three separate movies, now four, have yet to escape from.

You can find the same confused morals in ‘The First Purge’, with even the basic premise being a confused and pointless foundation. So the film attempts to rationalise this first purge as being an experiment, something that was only introduced in one area and then presumably spread as a nationally accepted concept. So this limits the scope of ‘The First Purge’ to a single island. The contradiction however, comes when you realise that no other ‘Purge’ film has reached beyond a single group of characters or environment. None of these films have explored any wider context for the Purge as a concept so there’s still no point in trying to rationalise it as having a cohesive origin. Once again, either lean into the over the top insanity or make more of an effort to work as a compelling film, don’t fall awkwardly in between. 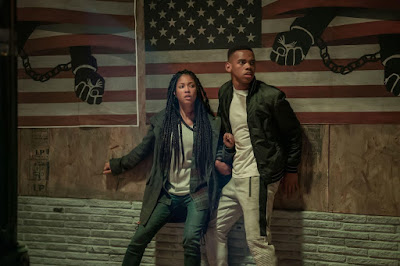 If it sounds like I’m talking at length about the concepts around ‘The First Purge’ rather than the actual film, that would be due to how the premise itself is still the most interesting thing within this movie by a wide margin. As a movie ‘The First Purge’ is another cheap, slightly exploitative, thinly drawn and hardly cohesive action/thriller. The action itself has little weight or meaning to it, once again creating an approach to action that is at odds with its own narrative. Much like the citizens who inhabit this world I almost found myself numbed to the carnage as it unfolded, with what should be a gripping and exhilarating third act instead being dreary and uninspired.

This movie even follows the pattern of having its protagonist be portrayed by an actor that feels so much better than the film he finds himself in. With ‘The Purge’ we had Ethan Hawke evoking some level of empathy and its two sequels had Frnk Grillo providing a manic intensity that seemed to realise what tone would be best suited to these films. Once again the lead role, in this case Y’lan Noel is surprisingly compelling as a protagonist. The character he portrays is confusingly written both in terms of characteristics and moral motive. But Noel’s portrayal sells each conflicting aspect of the character, and makes it all the more disappointing that the screenplay couldn’t make its mind up regarding what the character should actually be.

In fact I don’t think screenplay knows what it wants to be in general. I’ve already referenced the movie’s moral confusion at length but even on a momentary basis ‘The First Purge’ undermines it’s own established tone at every opportunity. Horrifically violent scenes can be playing out and a character will randomly spout a painfully obvious one liner. Some action sequences are grotesquely intense and others are laughably over the top. There isn’t a single aspect of the movie where the script doesn’t feel at odds with itself.

Shallow, uninteresting and tonally confused, its business as usual for ‘The Purge’ franchise.