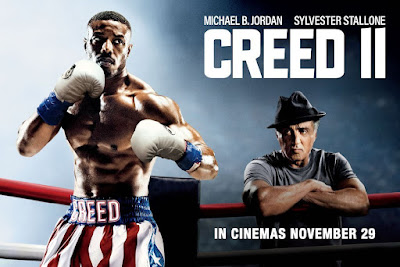 "In the ring you got rules. Outside you got nothing, and life hits you with all these cheap shots."

There’s a certain conflict in enjoying the latest instalment of a certain franchise whilst simultaneously hoping it is the last in the bloodline. Everyone wants a film series to end on a creative high point, to feel as if it bowed out with a flourish rather than limping off stage (I was going to use boxing allegories for this but I don’t know enough about sports to do so). With that in mind part of me felt this way after 2015’s ‘Creed’ as it felt like a completed cycle for the ‘Rocky’ franchise, as well as the sheer brilliance of the film itself. Now I have to ask, was that part of me right?

Against the wishes of trainer Rocky Balboa (Sylvester Stallone), Adonis Creed (Michael B Jordan) accepts a challenge from the son of Ivan Drago, the man who killed Adonis father in the ring during a 1985 fight. As Adonis and Rocky prepare for the bought, they each find themselves grappling with their own pasts as well as their own personal trials that continue to follow them every step of the way.

Three years after its release I feel as if we do not always appreciate just how remarkable ‘Creed’ was. For such a confident and capable film to emerge from the shadow of a franchise many thought had been put to rest, helmed by a young director in the form of Ryan Coogler who despite impressing the indie circuits with ‘Fruitvale Station’ was relatively unproven. It was a towering achievement of filmmaking that earned comparison to that of the original ‘Rocky’ of 1976. With Coogler no longer in the director’s chair for ‘Creed 2’ I was somewhat nervous as I wondered whether anyone could continue Adonis’ story with the same impactful skill.

In some ways I was justified in being worried. Steven Caple Jr, though clearly capable when it comes to directing, lacks the stylistic flourishes of Coogler which elevated ‘Creed’. I must stress that I’m not demeaning Caple for what is a very confidently assembled directorial effort, but his shots feel slightly less evocative than his predecessor, his cutting has less kinetic energy to it and the punches seem to leave less of a visceral impact.

I also confess to not being a fan of the aesthetic of ‘Creed 2’, with its murkier palette and lower contrast. Again it is less of a glaring issue with the film itself but more of a problem when compared to its predecessor, which stood out from the crowd partly due to Maryse Alberti’s vibrant yet grounded cinematography. That being said, Caple has several striking set pieces to work with which he uses to create several striking compositions. Images like Adonis shadowboxing underwater or the overhead shot of him running through a vast expanse of desert stand as being some of the most memorable images of the entire ‘Rocky’ franchise.

Despite not equalling its predecessor, ‘Creed 2’ is by no means a disservice. Its story is laced with dramatically powerful moments which land with their intended effect due to the script’s clear affection for its characters. It’s this affection which allows the narrative to lead these characters down unexpectedly interesting threads and then explore them to a worthwhile extent. Rather than feeling like heavy handed melodrama, the events that transpire in ‘Creed 2’ simply speak to the need to have the characters develop, whilst progressing in such a way that highlights how strong the characterisation is from the outset. 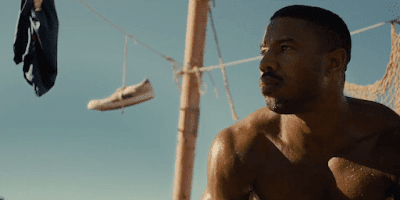 In some ways ‘Creed 2’ actually manages to create a more complex layout than Coogler’s film. Though this sequel feels less refined in its vision, that could be due to its attempts at creating a more nuanced palette for the characters. The goals of Adonis, Bianca and Rocky are less singular in this instalment. They balance the conflicts and tribulations of their lives as they continue to evolve. Even Ivan Drago,  a character introduced as nothing more than a cold killing machine, is bestowed some emotional nuance in terms of what motivates him to act the way he does throughout the movie, as well as a satisfying resolution to that arc.

This all gives the actors plenty to work with, which definitely adds to the films strengths given how fantastic its cast is. Jordan is unafraid to emphasise the vulnerable aspects of Adonis, and this trait within his performance serves to make the protagonists journey all the more compelling. Thompson meanwhile has more emotional weight to carry in this film due to Bianca having a more immediate impact on the narrative, which she handles impeccably. Once again the character never feels like an accessory to Adonis, but a fully-fledged partner.

Stallone doesn’t quite recapture the evocative depth of his portrayal of Balboa in ‘Creed’ but that is more due to the narrative placing less emphasis on the character. Here Rocky is more assured of his role as mentor, while still giving Stallone just enough to make his presence feel relevant and worthwhile. But Stallone revealed surprising depth in the first film, it is Dolph Lundgren’s turn to do just that in the sequel. The film uses Drago’s previous characterisation to its advantage as it takes a closer look at what was seemingly a monster to reveal the human layers beneath, which Lundgren garners with surprising empathy.

Despite not reaching the heights of its predecessor, ‘Creed 2’ is still a highly capable and emotionally fulfilling instalment of an iconic series.