"Whether you fight for god, or country, or family, I do not care. So long as you fight."

There are mentions of William Wallace throughout ‘Outlaw King’ as the events of this film almost seem to live in the shadow of those now famed events, and the characters look back to Wallace’s actions and try to learn from his victories and failings. That almost serves as a strange meta-narrative for ‘Outlaw King’, a movie about a medieval Scottish rebellion that will inevitably earn comparisons to ‘Braveheart’ for its subject matter alone. Though I would not regard Mel Gibson’s film as flawless by any means it is a daunting comparison given its enduring legacy and popularity.

After being crowned King of Scotland, legendary warrior Robert the Bruce (Chris Pine) is declared an outlaw and forced into exile by the English. Rallying the support of some nobles from across Scotland, Bruce begins planning a revolt that he hopes has the strength to overthrow the English and reunify his homeland as one kingdom.

David Mackenzie has a skill for crafting films that don’t fit into any specific genre classification. Right up to his most recent efforts such as ‘Starred Up’ and ‘Hell or High Water’, each of them had the dressing of a certain genre but defied expectations by engaging in strong character studies, interpersonal dynamics or larger socio-political themes. On a basic technical level ‘Outlaw King’ is an impressive achievement, however it lacks a certain substance that would elevate its story to compelling levels and feels disappointingly conventional compared to what we have expected from Mackenzie.

Another disappointment is Chris Pine’s performance. Despite usually carrying a great sense of charisma and gravitas with each of his roles (most of all in his previous collaboration with Mackenzie, ‘Hell or High Water’), there’s a pervasive flatness to his portrayal of Robert the Bruce in ‘Outlaw King’. I can’t fault Pine for his accent and it would be unfair to say there are any glaring errors in his acting in a momentary sense. But over the course of the movie it feels as if there is a distinct lack of range on display. Maybe Pine was trying to convey a sense of a man heavily repressing emotions but if that is the case the film never follows this as a key theme. Instead I was left with an impression that Pine’s performance seemed mostly static throughout the movie, rarely generating a sense of urgency, desperation or passion from Bruce’s crusade and the cause that motivated it.

That being said, it is not as if the script gave Pine much substance to work with. While Bruce’s actions are chronicled in great detail there’s not much time devoted to his personal trials. So much of the film seems determined to place Bruce within his historical context that it hardly stops to examine him on a personal level. You could leave ‘Outlaw King’ with an understanding of what Bruce did (or not since complete historical accuracy and movies have never really meshed well together) but not much of a compelling narrative as to who he was. The film doesn’t provide much of characterisation for him nor does it present an evocative arc. 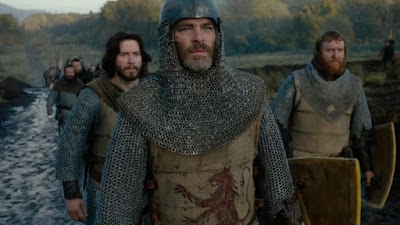 It’s for this reason why the battles, while technically brilliant, do not feel as involving as they should. ‘Outlaw King’ goes out of its way to lecture the audience about the historical significance of each conflict but lacks the personal investment that makes the difference between spectacle and involvement. Mackenzie shoots these action scenes with brutal ferocity that is very striking to behold. Each clash feels hard fought and the impact of every confrontation is keenly felt on a raw, visceral level. It’s just a shame that none of that is applied to a more intimate staging. When Wallace cries out in ‘Braveheart’, first and foremost we feel an individual with all his passion and charisma, which in turn ripples backwards to inspire thousands. That is where the emotional impact comes from.

‘Outlaw King’ is worthy of being compared to ‘Braveheart’ in the scope of its production though. The impeccable costume design and wide environments make for an epic spectacle. Cinematographer Barry Ackroyd allows the full sweeping weight of the landscape to fill the screen and the result is a highly immersive palette from which to stage some picturesque set pieces. The score and sound design are also worth commending, one communicating the epic scope of these historically meaningful battles whilst the other communicates the intimate grittiness of daily life and brutal battles.

There are so many inklings of interesting themes throughout ‘Outlaw King’, many of which are brought up directly through the conversations characters have. The price of ruling, the sacrifice of rebellion, the courage to persevere when all seems lost. All interesting concepts but none of them are explored or pursued by the script. Instead it seems content with trudging from one battle scene to the next, which not only creates a repetitive pace to the movie but leaves behind any compelling narrative that would have made Robert’s cause emotionally resonant. It’s tragic to see such effort put into recreating epic battles only to realise I had no reason to care for them.

‘Outlaw King’ is appropriately epic and technically proficient, but lacks any intimate emotional involvement to make its story feel compelling for its entire runtime.