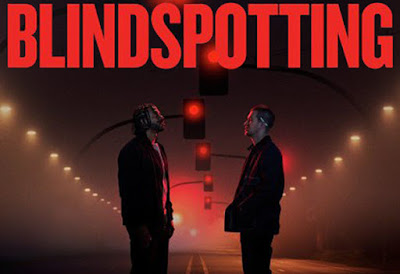 "Every time I come around, you monsters got me feeling like a monster in my own town."

Powerful subjects often require powerful statements. I say this because a film like ‘Blindspotting’ does not tread lightly around its own topic, nor does it approach it with a huge degree of nuance. But if you were looking to criticise the film for that then I would direct you back towards my opening sentence, films that cover the ground that this film does need not be subtle. The issue they are discussing is both too important to go unnoticed and too provocative as is to pretend that there is any understated way to approach it.

Collin (Daveed Diggs), is a convicted felon trying to get through the last three days of his probation without incident. He and his friend Miles (Rafael Casal) work for a moving company located in Oakland. Determined to keep a lid on things, Collin finds that increasingly difficult due Miles’ short temper and volatile persona. Their lives are further complicated by an incident Collin witnesses one fateful night.

The outspoken nature of ‘Blindspotting’ is just one of the many ways that the film reminded me of Spike Lee’s early work, in particular his 1989 masterpiece ‘Do the Right Thing’. Both deal with themes of race relations on a systemic and individual level, both are highly stylised works of filmmaking with kinetic camera movements and vibrant editing choices. They both blend high drama with low comedy and crucially they each begin as laid back “day in the life” kind of stories before escalating into something with far more gravitas.

However for all their differences it’s worth noting that ‘Do the Right Thing’ was Lee’s third outing as a director, whereas ‘Blindspotting’ is the first from its director Carlos Lopez Estrada. For a debut feature it displays an astonishing command of craft and confidence of style. Its visual dynamism effortlessly guides the viewer through Collin and Miles’ routines, making their mundane exchanges, moving jobs and downtime feel completely involving. It’s at these moments when the movie’s tone is most playful, so therefore Estrada allows his own stylistics to be at the forefront, often putting them to great comedic effect.

These moments of humour that are laced throughout the movie make its high drama feel even more impactful. Estrada has such confidence in tone that he knows when to pull back the kinetic camera work and quick editing to focus on the human conflict unfolding in the scene. He allows his actors to emote and puts a tight focus on them when they do, sometimes to an uncomfortable yet immensely cathartic effect. Perhaps the best example of this is a scene in which two characters recognise Collin from an earlier encounter and begin to recall a story. What we think will be a humorous anecdote, with a stylised visual language to match, gradually morphs into a major turning point in our understanding of the story and characters. It deepens our context on the history of these people and provides motivation for their dynamic now. At no point does this shift to drama feel even remotely strained. When the anecdote is over Estrada lets his camera linger on those who are most affected by it as they react, and this sudden halt lets us feel their emotional turbulence so acutely. 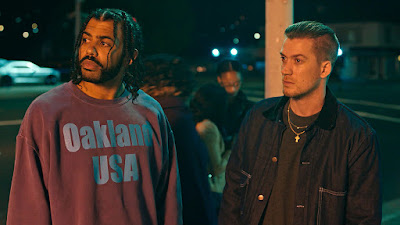 Another aspect of the movie you feel whilst watching it is the unabashed adoration Estrada has for Oakland. ‘Blidspotting’ establishes such a refined sense of environment and shoots it so beautifully that it is hard not to feel the passion the characters do for where they live. With just a handful of characters the movie paints a portrait of a world that extends far beyond these people. As the film escalates it becomes all the more apparent that its statements also reach far beyond the individuals of its story. ‘Blindspotting’ carries great ambition in its themes and states them with blunt force. Though it is far from subtle, overtly stating its theses’ at numerous points, it is undeniably powerful.

That power is backed up by the excellent performances given by its relatively small cast. As the movie unfolds both Collin and Miles are bestowed with additional layers of depth that make your preconceptions about them all the more impactful. David Diggs projects such a convicning sense of carelessness in his portrayal of Collin that it is all the more impactful when we learn all that is weighing on him. Though I would consider Collin the protagonist of the film there is just as much of a compelling arc given to Miles as we uncover his temperament. Rafael Casal’s performance is seeping volatile energy which sometimes manages to evoke tension in a scene all on its own, as we fear when Miles will explode. But as our understanding of him becomes more complex, so does the persona that Casal conveys. But outside of the high minded drama it is worth noting how well these two actors execute their comedic moments, so much of the humour within ‘Blindspotting’ rests on their ability to tell compelling arcs whilst being funny and they each do just that with ease.

Though my comparison between ‘Blindspotting’ and ‘Do the Right Thing’ was meant as praise, I do think it’s worth noting how tragic it is that these issues are still so pervasive. Each film goes about making a statement on the intricacies of race relations, whether that be on a personal level or on a systemic one. What Lee had to say was radical in the late 1980s, when most major movies seemed to treat prejudice as a thing of the past. ‘Blindspotting’ highlights how essential it is that films like this continue to exist, and continue to make their statements very clear.

Stylish, vibrant and energetic on a visual level, but backed up with a masterful blend of subtle comedy and heavy drama, ‘Blindspotting’ is a supremely confident directorial debut.